Yet Another Mind Boggling Financial and Operational Performance for Amazon

There remains little doubt that this online retail platform provider is benefitting handsomely from the ongoing pandemic and from consumer’s continued accelerated use of online for all forms of shopping needs.

Operating Income increased to $8.9 billion compared to $4.0 billion in the first quarter of 2020. Consider that in the prior quarter, which was the all-important holiday fulfillment quarter, the online giant reported an operating income of $6.9 billion. Net Income in the most recent quarter was reported to be $8.1 billion. In its reporting of results,

Looking forward, the online retailer indicated that the company now expects revenues in the current quarter to be in the range of $110 billion and $116 billion, a growth range of 24 percent to 30 percent. Operating income is expected to be in a range of $4.5 billion to $8.0 billion with an assumption of $1.5 billion of costs directly related to the pandemic. Executives confirmed that the annual multi-day Prime shopping holiday is now being planned for June, occurring in the Q2 quarter. 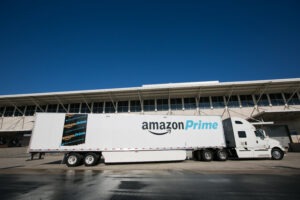 Evidence that Amazon is indeed profiting from the pandemic was provided by The Wall Street Journal which noted: “The Seattle’s company’s profits in the year since the pandemic started exceeded $26 billion, more than the previous three year combined.” From our Supply Chain Matters lens, a lot of that achievement has to be credited to massive prior investments in overall supply network and logistics capabilities, which were accelerated prior to and during the pandemic.

Sales growth among major geographic regions included a 60 percent year-over-year growth for the International segment and a 40 percent growth rate for the North America segment. The former is an eye telling number, indicating the online retailer is gaining added traction internationally.

Commenting on the latest quarterly performance, CFO Brian Olsavsky indicated to investors that capabilities to further enhance one-day fulfillment services continues as is the ongoing expansion of warehouse and fulfillment capabilities.

In conjunction with financial reporting, Amazon additionally announced the raising of wages by between 50 cents and $3 per hour for more than 500,000 of its U.S. employees. The pay raises were originally planned for later this year but have been moved up to take effect in mid-May thru early June for customer fulfillment, delivery, package sortation and specialty fulfillment workers. The overall cost of this effort was noted as over $1 billion.

Some of our readers might conclude that the recent high visibility labor union election that failed at the retailer’s Bessemer Alabama fulfillment facility may have given the retailer pause.  It was certainly on the mind of Founder Jeff Bezos in his recent annual letter to shareholders. One paragraph begins: “Does your Chair take comfort in the outcome of the recent union vote in Bessemer? No, he doesn’t. I think we need to do a better job for our employees.” He then goes on to disparage news reports that are not complimentary to how the retailer manages its employees or treating them like robots. He further flat-out states: “We don’t set unreasonable performance goals. We set achievable performance goals that take into account tenure and actual and actual employee performance data.”

We found the above a bit hollow given all of the many reports, investigate reporting or books that have commented on the company’s labor practices and employee turnover.

In a section titled: Earth’s Best Employer and Earth’s Safest Place to Work, Bezos stated that: “Despite what we’ve accomplished, it’s clear to me that we need a better vision for our employee’s success.” He then outlined the various technology-driven efforts and sophisticated algorithms to rotate employees among various jobs to help decrease repetitive motion effects and help protect them from musculoskeletal disorders (MSD). In other words, there always seems to be a technology answer to employee wellness vs, a more human aspect, namely consideration of each employee’s strengths or weaknesses, and having an overall plan of development. Another reaction we had is that while Bezos is now becoming more attuned to employee concerns and needs, he will be exiting the company’s day-to-day leadership in Q3 when Andy Jassy takes the reigns as CEO. That will be the true test of the better vision for employee or gig worker success.

As noted in prior commentary related to our 2021 Predictions, Amazon will likely come under increased scrutiny from various U.S. and European regulators regarding overly aggressive competitive practices focused on hosted sellers or market competitors. In October, a U.S. Congressional Sub Committee concluded a 16-month investigation and accused the online provider of exerting “monopoly power” over sellers on its web site. The European Commission declared the online provider broke EU anti-trust rules by using independent seller’s data for its own benefit.

Regulators in China have suddenly cracked down on the country’s online retailers and Internet focused providers for deemed anti-competitive practices. Alibaba alone was slapped with a record $2.8 billion fine because of market abuses.

These are all signs that government regulators are now paying closer attention to high profile online tech firms and their overall impacts on open markets and healthy competition.

With each and every Amazon mind-boggling financial and operational performance report, the scrutiny can only intensify. But at the same time, the stakes for being the second or largest U.S. employer are also a political influence.