With various global wide December 2020 and full-year PMI indices reported and archived, it has become rather clear that global manufacturing and supply chain activity proved resilient after the initial shocks of the COVID-19 pandemic and indeed reflected a “V” shaped response up until November.

As the year 2021 begins, global supply chain activity levels are for the most part exceeding levels that occurred during most of 2019.  That stated, this new year begins with discerning signs of supply network constraints and material pressures, classic signs of capacity imbalances as ongoing disruptions are providing noteworthy signs of caution for the first part of 2021.

According to the opening sentence of the December 2020 J.P. Morgan Manufacturing PMI™, a reflection of a compendium of global wide indices:

“The end of 2020 saw rates of growth in global manufacturing production and new orders remain the strongest seen over the past decade, as the sector continued to recover from the COVID-19 related downturn earlier in the year.”

The above sentence alone would be cause for celebration among global supply chain management teams.

Despite the index posting an unchanged value of 53.8 for December 2020 activity, the noted takeaway was that global wide activity has remained above the neutral 50.0 mark for six consecutive months.  The report authors took note of signs of recovery and growth in most major domestic markets, four successive monthly increases in new export orders and other positive activity indicators. Broad-based growth among all three sectors of consumer, intermediate and investment goods industries were noted in December’s indices. The December value of 53.8 compared to the December 2019 value of 50.1 would indicate that global-wide manufacturing activity ultimately expanded during 2020.

However, the December report provided cautions indicating that global supply chains are stretched, leading to marked delays and disruption of material deliveries, production schedules and distribution plans. Average supplier lead times reportedly lengthened to one of the greatest extends in survey history. 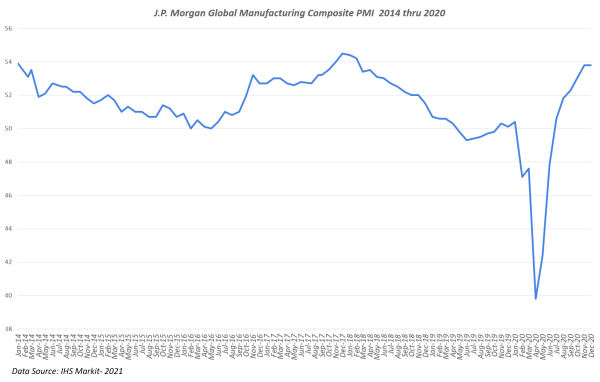 As can be observed in the above graphic, the “V” shaped response that began in April 2020 has now reached a plateau. But, as many supply chain leaders and strategists are all too aware, history is not a true reflection of the future in this new normal global business environment. Without a clear sense of key predictive leading indicator signs, key information and assessment, sensing trends before they occur are the new table stakes in business and supply chain response.

Among indices for Developed Economies, the Manufacturing ISM® Report on Business® an index of U.S. wide manufacturing and purchasing activity was reported at an astounding value of 60.7 for December 2020, its highest value in over two years. The December value reflected a 3.2 percentage point gain from that of the November. The authors noted that survey respondents again pointed to absenteeism, short-term shutdowns and availability of workers as a result of increased virus infection levels as limiting more growth. Panel sentiments were noted as remaining optimistic, an improvement compared to November.

“Driving the headline figure higher, however, was a substantial deterioration in vendor performance. Supply chain disruptions escalated amid supplier shortages and transportation delays stemming from a lack of available drivers, and COVID-19 travel restrictions. Lead times lengthened to the greatest extent since data collection began in May 2007.”

As was noted in this index’s November report was the encouraging sign that demand for investment goods such as business equipment and machinery continued on a positive track.

Both U.S. focused reports included a similar theme of higher manufacturing and input materials costs, however, from our lens, the Markit report reflected a more cautionary tone.

A further standout area in this Developed Regions grouping remained Taiwan with the headline for the Nikkei Taiwan Manufacturing PMI® indicating the sharpest improvement in operating conditions in over nine years.  The reported December value  of 59.4 was a 0.5 percentage point increase over November’s 56.9 value. The report indicated a “sharp and accelerated rise” in Taiwanese manufacturing production. Total new orders once again expanded at the steepest pace since early 2011.  Panelists reported both greater domestic and export order demand.

The IHS Markit Eurozone Manufacturing PMI® reportedly improved to its highest value since May 2018. The December value of 55.2 reflected a 1.4 percentage point increase from that of November.  A similar theme was production levels being impacted by delays in delivery of input materials, along with delays in transportation as a result of pandemic related restrictions. Further noted was rapid and accelerated increases in average input prices while operating costs rose to the largest degree since late 2018. The countries reported as reflecting the highest PMI related activity were Germany– a 3-year high, Netherlands– best performance in over two years, Ireland– sharpest expansion in five months.

The closely related IHS Markit/CPIS UK Manufacturing PMI® reflected a three-year high value of 57.5 in December. after an ebb in momentum reported in October.  The authors again pointed to Brexit buying and stockpiling among customers across Europe, as businesses brought forward orders to guard against significant transportation disruptions due to the December 31 deadline for a trade deal. Quantities of purchases reportedly rose at the third-fastest rate in the 29-year survey history. As Supply Chain Matters has previously highlighted, a last-minute trade agreement among the UK and the EU was finally agreed to.

In December, the standout regions for the Developing Economies were India and China.

The IHS Markit India Manufacturing PMI®  December index rose to 56.4 slightly higher than the 56.3 reported in November. The authors headlined the report indicating that the health of the country’s manufacturing sector continued to strengthen with increased production and input buying amid efforts to rebuild inventories following earlier pandemic related business closures. While international demand for Indian goods rose, there was indication of anecdotal evidence suggesting pandemic-related pressures related to that growth, with new export order increases moderating at the slowest pace over a historic four-month sequence. The overall average PMI value for the Q4 period was 57.2, compared to the Q1 average of 53.9.

The closely followed Caixin China General Manufacturing PMI® which is more of a reflection of private industry slipped from a value of 54.9 in November to 53.0 at the end of 2020. Whereas the November report pointed to the strongest improvement in operating conditions in a decade, the latest report indicated that the rate of improvement was the softest in three months. Weighing on the December index was a slower increase in production levels, with slower, but marked increases in overall new orders. Chinese manufacturers reportedly experienced high deterioration in supplier performance and far larger raw material cost increases. The rate of inflation was noted as being the steepest recorded for over three years. Business confidence regarding the 12-month outlook was noted by the authors as remaining strongly positive, especially for post-pandemic recovery.

A concerning area remains that of Mexico, as the country remains challenged in dealing with the ongoing virus-related disruptions. The IHS Markit Mexico Manufacturing PMI® value slipped gain in December to a value of 42.4, sliding 1.3 percentage points from the  43.7 value in November. The report authors pointed to a continued sharp deterioration in the health of the manufacturing sector. Factory orders decreased for the tenth month in a row amid continues COVID-19 restrictions and business closures.  December’s value of 42.4 was 4.7 percentage points lower that the December 2019 value, a measure of the overall deterioration.

From our Ferrari Consulting and Research Group lens, our monitoring of these global indices leads us to believe that indeed some concern and caution is appropriate for the coming first quarter of 2021. The commentaries we have highlighted indicate that while inbound order activities remain positive, supplier lead time, manufacturing challenges and other pandemic related disruptions are taking a noticeable toll on service levels and added costs. There remains a global wide imbalance of ocean shipping containers that are impacting goods shipments from Asia supply sources. Once more, with the exception of China and maybe a few other Asian based nations, the third wave of exploding virus infection rates will invariably add to such concerns in the coming three months.

January and February are traditionally a period of seasonal slowdown in global manufacturing, principally  due to the celebration of the Lunar New Year period in China and other nations  Production facilities temporarily suspend operations for this holiday and global shipping lines cut down on scheduled sailings. Supply chain management professionals have vivid memory that it was just after the Lunar New Year shutdown period in 2020 that the first reports of a coronavirus outbreak was believed to be occurring in China’s Hubei Province, which quickly led to a nation wide lockdown.

This year, uncertainty focuses on the new, more viral mutations of coronavirus, and on the ability of healthcare supply networks to produce large amounts of vaccine and administer them to significant numbers of global citizens.

A further determinant will be if these robust levels of global supply can be consumed by global product demand. In other words, how accurate was product supply and demand matching.  Supply chain management teams will have that knowledge after assessing Q4’s actual sales and residual inventory results. One area that has troubled us is the larger volumes of inbound ocean container ships processed at both U.S. West and East coast ports during the month of November. Whether all of these goods were able to reach retailer customer fulfillment facilities in-time for last-minute December holiday demand is an open question.

We suspect that January’s and February’s global supply chain activity indicators will likely report setbacks in activity levels, along with a drag of available inventories for certain industries. The headwinds we have highlighted are classic signs of supply constraints and added disruptions in the weeks to come.

Most industry supply chain management teams should be level-setting realistic expectations within integrated business planning teams and preparing accordingly. We qualify with the word “most,” since the obvious exceptions are vaccine, pharmaceutical and healthcare delivery supply networks. Here, the marching orders are do whatever it takes to satisfy global demand and production needs.

As a global community, we all need to lend our hand to assist in these health-related efforts.