Within a matter of a week, the business news cycle has featured headlines with a discernible common theme, that being technology-driven workforce realignment and restructuring within prominent global logistics, transportation and online customer fulfillment settings.

As readers explore these announcements involving global container shipping, parcel delivery, physical store and online customer fulfillment last-mile delivery, the notions of workforce realignment ring as the common theme along with pressures for increased levels of productivity and efficiency.

The pervasive movement toward online driven fulfillment has many implications and many interpretations, and these types of announcements will likely continue.

Maersk indicated to news agencies that upwards of 27,000 jobs, or nearly a third of its global workforce could be affected but has declined to indicate how many workers would be laid off. Further indicated is that some workers will experience large changes, while others, smaller changes. “Some will reportedly be assigned new jobs and a smaller number will unfortunately become redundant.”

Initially reported by Reuters, the global shipping giant reportedly has been under pressure from investors to speed-up transformation from being what is perceived as an unwieldy conglomerate. The move is targeted to integrate the seaborne container and in-land logistics businesses to service large customers.

Under the plan, the Damco freight forwarding business and Africa-based carrier Safmarine will each be integrated into Maersk by the end of this year. Further reported is that shipping line Hamburg Sud, which Maersk acquired in 2017 will remain a separate branded line but back-office operations will also be folded into Maersk.

In a recently published Supply Chain Matters blog, we highlighted how global trade has recently encountered an ocean container shipping surge while global container shipping lines are predominantly making money more than likely at the expense of overall customer service levels. We opined to our readers that ongoing moves by ocean container shipping providers such as Maersk, to vertically integrate into land-based logistics services including last-mile delivery had implications for quicker adoption of technology and streamlining business units. 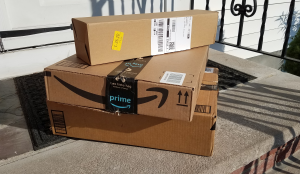 The Wall Street Journal, citing a person familiar with the matter,  reported last week that United Parcel Service (UPS) is planning to offer voluntary severance buyouts to some management employees in an effort to trim payroll costs.

The report indicated that select workers would depart in two phases, either by the end of this year or the middle of next year. UPS has decline to share any specifics related to the total number of management staff involved.

The action is attributed to the new presence of UPS CEO Carol Tome, who was previously the CFO for home improvement retailer Home Depot. On a recent communication to investors on the carriers latest financial performance, Tome addressed a Transformation 2.0 effort to drive continued productivity and efficiency across the company. Tome’s context for this UPS transformation describes the carriers as seeking  “better as opposed to bigger.”

Supply Chain Matters has also noted in many prior commentaries how large parcel carriers continue to rely added fees and surcharges as parcel shipping volumes expand exponentially. UPS will reportedly hire an additional 100,000 workers to support the upcoming 2020 holiday fulfillment surge period, in addition to ongoing online order volume as a result of the ongoing COVID-19 business disruption.

According to the report: “The facilities, which will eventually number about 1,500, will bring products closer to customers, making shopping online about as fast as a quick run to the store.”

Further noted is that the move is likely designed to counter moves from retailers Walmart and Target who are successfully leveraging physical stores as integral entities to a same or next day online order fulfillment experience. The Bloomberg report indicates that beyond retail rivals, small, quick delivery warehouses can help counter a threat posed by United Parcel Service and the U.S. Postal Service in last-mile delivery capabilities. Further reported are that many of these new local Amazon centers are coincidentally within walking distance to UPS facilities.

Amazon declined to offer comment to Bloomberg to its reporting.

Last week global retailer Walmart indicated that it would institute sweeping changes relative to in-store staffing among U.S. based stores just as the upcoming holiday fulfilment period gets underway in October.

The move is reportedly aimed as part of a re-thinking of how to deploy the retailer’s 1.5 million U.S. store worker population most efficiently in a more digital age.

The retailer’s U.S. supercenter stores will switch to a reported team-based staffing model that has been in testing over the past 15 months in smaller stores. According to reports, upwards of 165,000 hourly workers will get some form of a pay increase.

According to a published report by Bloomberg, a memo outlining the store changes cautions that the program: “will trim the number of leaders per store and could prompt some to leave the retailer.” The new staffing plan reportedly replaces most longstanding leadership roles such as store manager, assistant manager or department manager with what is termed as a “future-focused” hierarchy of store leads, coaches and team leads. A team lead’s compensation reportedly can start at $18 per hour and can rise to upwards of $30 per hour in some cases.

Walmart worker advocacy groups have reportedly given a cool reception to these proposed changes perceiving that additional work will come for barely any more pay, while existing department managers that do not assume a team lead position could be effectively demoted and their pay declined by October 2021. Walmart’s minimum wage of $11 per hour is apparently maintained with this store level restructuring, while other retailer’s such as Target has raised their minimum wage to $15 per hour.