Was FedEx’s Most Recent Financial Performance a Sign of What is to Come for Global Trade Volumes in 2019?

After reporting fiscal Q2 financial performance and a lowering of 2019 earnings guidance this week, FedEx shares were hammered. The Supply Chain Matters blog opines as to whether this is indeed a sign of significant declines in global trade volumes in 2019.

FedEx reported its fiscal Q2 financial performance for the quarter ending November 30 and equity markets were not pleased by management’s explanations, and on a decision to lower 2019 earning guidance. The company’s stock plunged 6 percent on the news and sank another 10 percent today. 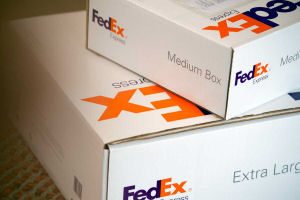 The global logistics and transportation carrier’s CFO pointed to ongoing deceleration in near-term global trade as impacting financial performance for the FedEx Express business unit which includes the prior acquisition of European based TNT Express. FedEx chairperson and CEO Frederick Smith indicated the following regarding operating conditions:

“While the U.S. economy remains solid, our international business weakened during the quarter, especially for Europe. We are taking action to mitigate the impact of this trend through new cost-containment efforts.”

Executives further noted that the impacts of Brexit along with escalating tariff and trade tensions have raised concerns in overall global shipping volumes.

All of this prompted FedEx to lower its full year 2019 earnings guidance and announce efforts to cut costs, including implementation of a voluntary employee buyout program targeted to sav $225 million to $275 million in fiscal 2020. The program is targeted for U.S. employees, but a company statement indicates that similar programs are being considered for international employees.

CEO Smith made additional blunt remarks today indicating that most of the challenges facing the company were the result of politicians around the world. That reportedly included making a bad decisions concerning the U.S. corporate tax reform law and unilateral tariffs, creating a rather difficult business situation with Brexit, the immigration crisis in Europe and the mercantilism of state-owned enterprises in China. The remarks prompted the company’s stock to drop another 10 percent on the news. Not good!

The obvious questions and likely volatility of FedEx shares revolves around whether this trend portends to be a sign of wider declining global trade and consequent international transport volume declines in 2019. Not only was FedEx stock impacted by the news, UPS and others were as-well, but not as extreme.

Our Supply Chain Matters view is maybe, but more evidence data is needed.

In the case of FedEx, it would appear that the challenges specifically in its FedEx Express business have a lot to do with assimilation of TNT Express and the aftereffects of a cyberattack that impacted many European companies in 2017, including TNT Express. Other factors such as more expensive international air freight routing may be evident as-well.

FedEx acquired TNT Express in April 2015 for the implied value of $4.8 billion, a then reported 42 percent premium. Our readers may recall that the deal came after multiple attempts by rival UPS, only to be rebuffed by Eurozone regulators. The acquisition presented a lot of challenges in terms of integrating networks, processes and practices.

In 2017 many European companies were significantly impacted by the NotPetya cyberattack including global shipping line Maersk and TNT Express.

Evidence comes from the following statements that appear in the FedEx press release regarding recent financial performance:

“Management still expects to realize the benefits from TNT Express that were anticipated when the company was acquired. However, lower-than-expected express package volume due to European economic weakness that accelerated during the quarter and is expected to continue, and a change in service mix following the June 2017 cyberattack on TNT Express, will delay the anticipated realization of these benefits. As a result, the target to increase FedEx Express operating income by $1.2 billion to $1.5 billion over fiscal 2017 results will not be achieved in fiscal 2020.

Global trade has slowed in recent months and leading indicators point to ongoing deceleration in global trade near-term,” said Alan B. Graf, Jr., FedEx Corp. executive vice president and chief financial officer. “These trends, coupled with the change in service mix at FedEx Express, are negatively impacting the segment’s financial results. We remain committed to actively managing costs with a heightened focus on increasing efficiency across the organization.””

From our lens, the above statements would imply a specific set of challenges involving TNT Express and its operations in specific countries. A change in service mix following the cyberattack appears to us to be a compounding indicator coupled to slower express shipment volumes in Europe. In other words, it may be a shipping channel and carrier specific focused problem.

Thus, we would look towards additional trending data beyond just one global carrier to determine whether international shipment volumes will significantly decline. We will not have to wait all that long before broader evidence appears.