Global retailer Wal-Mart held its annual meeting of stockholders last week and declared that the world’s largest retailer has  “started to invent the future of shopping again.” CEO Doug McMillon declared: “we are going to make shopping with us faster, easier and more enjoyable.” 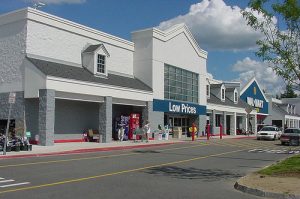 We would quickly add that this is a tall and expensive order in today’s turbulent retail industry environment.

In prior commentaries, Supply Chain Matters has praised Wal-Mart’s emphasis on leveraging the retailer’s vast brick and mortar presence as a more effective extension of an overall omni—channel business strategy. What seems clear from the strategy that continues to unfold is that Wal-Mart will indeed leverage its significant physical presence as an extension of an online shopping experience. In that vein, the retailer is currently testing the deployment of automated online order pickup stations in stores, actual pick-up stations in select store parking lots, and what the retailer’s terms as “Jet Fresh” delivery, which provides deliveries of household groceries one 1-2 days. Regarding the latter, company management indicated that the service is currently available to about half of U.S. households.

Stockholders were updated on the retailer’s continued commitment to source $250 billion in products within the United States along with meeting a goal to source $20 billion of products from women-owned businesses. Further mentioned were initiatives to source more local and sustainable products and to reduce greenhouse gas emissions across the supply chain by 1 giga ton by 2030.

CEO McMillon boldly declared: “We will compete with technology, but win with people”, adding that workers should not fear increasing automation that will change the work involved in retail.  He added: “We will be people-led and tech-empowered” indicating: “I don’t think we should be afraid of changes.  Instead, I think we should recognize that we’ll be able to learn, grow and change together.”  He went on to state that associates need to be lifelong learners and: “The secret of our success will always be our people.”

Uplifting and motivating statements indeed, but from our Supply Chain Matters lens, there are still brute realities to the current Wal-Mart strategies.

The first and obvious was a realization that prior attempts to build a competitive online presence met with very mixed results. That ultimately led to the bombshell acquisition of Jet.com for a sum of over $3 billion. Since that time, Jet.com founder Marc Lore has been given total license to revamp and improve the retailer’s online presence and associated capabilities. That includes more widespread utilization of Jet.com’s price optimization algorithms, as well as lower prices for merchandise that is ordered online and picked-up at a local Wal-mart store.

As many retailers are now fully aware, investing in online fulfillment capabilities is not a cheap proposition, and many of the touted online initiatives already deployed and talked about are examples of these efforts.

And then there are realities of a changed, people and technology-driven business model that CEO McMillon touched upon. He acknowledged the needs to create new jobs in data science, machine-learning, systems engineering and mobile app development. At the store Associates level, being tech-driven brings new realities as well in terms of added training and personal skills development to be able to be an extension of an extensive omni-channel customer fulfillment environment.

Other open questions come to mind.

It remains widely believed that Wal-Mart has staffed its retail stores with a predominance of part-time vs. full-time staffing.  While starting salaries were recently boosted to a minimum of $10 per hour for retail associates, that level does not provide the financial means to invest in more individual technical skills.  Those possessing such skills will likely be able to find jobs that provide far higher compensation levels. Part-timers need to find other jobs to financially make ends meet, again leaving little time for personal skills development.

Another reality is that the online world remains highly competitive, especially when it comes to Amazon. We have previously highlighted that Amazon and Wal-Mart have been in head-to-head negotiations with major suppliers for lowest priced supply of inventory.

On the very week of Wal-Mart Annual Meeting, Amazon announced a lower Prime membership fee for low-income shoppers which are Wal-Mart core customer group. Lowest income shoppers, those currently obtaining government assistance will likely be eligible for $5.99 monthly Prime membership that includes free shipping. Likewise, Amazon announced an Amazon Cash program earlier this year that allows customers to add cash to their account balances at more than 10,000 locations across the U.S. The online giant continues to step-up its merchandise offerings in lower-cost apparel and in a wider variety of household groceries and local food and grocery outlets.

The good news is that at least one large retailer, Wal-Mart, can portray an optimistic strategy of future omni-channel capabilities. On the other hand, there remains an ongoing learning that former methods, practices, and corporate culture are all subject to change in the new world of retail and in retail supply chains.