Volkswagen announced today that the company plans to add a long awaited 7 passenger mid-sized SUV to the U.S. auto market in late 2016 and that the design and production of this vehicle will originate from VW’s current facility in Chattanooga Tennessee. 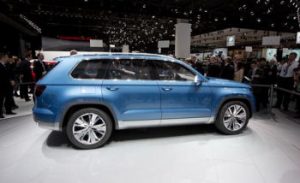 The German based automaker indicated that it plans to invest $600 million to both establish a new research center to be named National Research& Development and Planning Center to help design this new SUV and expand the existing Chattanooga to accommodate a new SUV production line. The new research center is expected to employ upwards of 200 engineers while an additional 538,000 square feet of capacity and an incremental 2000 factory jobs will be added to the U.S. facility. With this new incremental investment, annual production volumes at Chattanooga would rise to 250,000 vehicles.

The company re-iterated that from 2014-2018, it will be investing more than $7 billion in capital resources in both the U.S. and Mexico in order to fulfill its goal to deliver 800,000 vehicles in U.S. and North America sales volume.

This new model is to be based on the CrossBlue concept, developed specifically for the North American market and unveiled last year at the Detroit Auto Show. According to a posting by Car and Driver, the model is designed to compete with the likes of the Honda Pilot, Ford ExplorerJeep Grand Cherokee, Nissan Pathfinder and Toyota Highlander. Emphasis is on style and very high fuel economy including a diesel powered version. This Car and Driver article published in January 2013 declared that it was almost a certainty that the SUV would be produced in Chattanooga.  So much for hype, drama and speculation.

Business media has widely reported that efforts by VW to broaden its penetration of the U.S. auto market continue to stall.  According to a published report from Bloomberg regarding the latest announcement, VW’s U.S. sales declined 22 percent in June, accelerating an overall annual decline of 13 percent for the first-half of 2014. That is counter to a reported 4.2 percent increase in the overall U.S. market during the same period.

Readers may recall that in mid-February an effort to have workers at Chattanooga represented by the United Auto Workers union was narrowly defeated. The Chattanooga production facility was one of a very few Volkswagen global based facilities not having a formal Works Council and thus the German based IG Metall labor union advocated to Volkswagen’s senior management to encourage the formation of such a structure in the U.S.  The ultimate vote failed to win a majority, but the vote was close, with a final reported tally of 712 to 626 indicating rejection of labor union organization. Leading up to the vote, a highly charged campaign by local legislators and activists alleging that union representation would jeopardize any future work being sourced at the plant, including the pending SUV model.  Today’s VW announcement includes statements from many of the same politicians echoing the positive implications for the local economy.

However, VW may also be addressing the need for more open worker input to decisions. Today’s VW announcement additionally indicates that Bernd Osterloh, head of VW’s General and Works Council will join the Board of Directors of Volkswagen Group of America “to play a more concentrated role in shaping our U.S. strategy in the future.” In the press release, Osterioh indicates that he is “determined to uphold the interests of Volkswagen employees in Chattanooga. Previous media reports have quoted Osterloh as indicating that having a Works Council was an important factor that would play into whether another product would be made in the U.S. facility. Of more interest, four days ago, the UAW also announced that it will open a branch office close to the Tennessee facility.

Obviously, VW is late to the party in introducing a U.S. model SUV, and two years is a long time in today’s consumer’s markets.  This is a high stakes effort that requires total collaboration and succinct decision-making. Engineering, product management, supply chain and production teams will have to highly synchronize efforts to assure the 2016 milestone will happen. For its part, VW corporate will have to shed its centralized decision-making model and let the new North America based research center carry the ball.

What Should Supply Chain Management Teams Expect in the Coming Year: Global Economic and Financial Forecasts