As we pen this blog posting during the peak of the online holiday fulfillment period, this analyst would like to share highlights of a recent visit to an innovative robotics provider in the area of logistics and material handling equipment, one that is applying advanced technologies related to autonomous operations, artificial intelligence, and Internet of Things (IoT) enablement to robotics.

A tidal wave is impacting the area of warehousing, logistics and distribution. The explosion of online commerce and the dominance of Alibaba and Amazon as both dominant online retailers and now, high-volume logistics and customer fulfillment providers are certainly top of the list. As new distribution centers increasingly pop-up across the globe, so is a critical shortage of qualified employees, both permanent and temporary, to staff and operate such facilities. Higher labor costs, employee turnover and concerns for safety under rigorous around-the-clock operations remain as significant challenges as-is the constant need for improved efficiencies.

Another building concern has been the overall cost of automating a logistics and customer fulfillment facility with large numbers of fixed conveyors, pallet and pick racking and control systems that are not only expensive, but do not allow for flexibility in changing operational requirements or needs for temporary facilities.

Amazon’s acquisition of warehouse robotics provider Kiva Systems in 2012 was a watershed event that has since led to the application of large numbers of material handling robots populating Amazon’s current network of customer fulfillment centers. When the acquisition occurred, some questioned why Amazon would buy a leading-edge robotics provider. Not anymore. Amazon not only gained the expertise in material automation and order picking but also in the ability to quickly and more economically fit-up customer fulfillment centers in just about any location, large or small.

This supply chain thought leader recently had the opportunity to visit Vecna Robotics, an innovative robotics manufacturer located in Cambridge Massachusetts.  The company was founded in 1998 by a consortium of MIT engineers, and indicates that it remains a profitable, privately-funded company. A guiding principle that remains is a stated belief that people matter, and that businesses can be profitable, ethical, and socially responsible, which is to be applauded in this technology area. Vecna manifests that principle with its motto; “Better Technology, Better World,” and currently supports two broad robotics and automation areas, Healthcare and Logistics industries. While Vecna initially piloted their robotics in Healthcare and military applications, Vecna leveraged this experience and translated their technology for applied use in logistics, material movement and warehousing areas, and following successful pilots with select customers, officially launched their solution in April of this previous year. 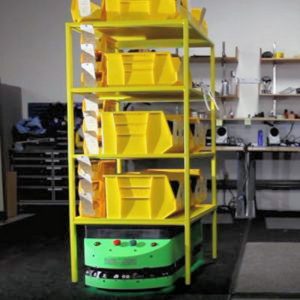 My hosts, Director of Business Development Matthew Cherewka, and Marketing Manager Brent Watters, provided me a review of the company’s technologies and associated products along with a walk-through of the respective labs that are working on the new robotics applications addressing various logistics process and decision-making challenges.  I was impressed with how far technologies have advanced and specifically how autonomous-focused applications being developed for autos, trucks and buses are now about to be applied to material movement and handling.

Machine Perception– the perception programs that allow various machines to sense and learn objects, people, and scenes in the operating environment.

Context-Aware Navigation– the leveraging of sensor and modeling technologies to navigate unstructured environments including the planning of machine paths among various obstacles, optimal path following and autonomous routing to designated docking station.

Platform-Agnostic Automation– Vecna has developed a range of mobile platforms ranging from small, low-cost bots for individual order fulfillment to the ability to automate OEM tuggers and pallet trucks to move thousands of pounds. However, all of these platforms utilize the same core technology, and so can be deployed together without requiring any changes to existing facilities.

The latter was particularly mind-blowing to observe in action and in a video filmed at a pilot customer implementation of a rather large global logistics company.

Vecna’s technologies are being applied to movements involving totes, bins, carts, shelves, pallets, and oversized objects. Plans call for multi-agent coordination to include integration with customer Warehouse Management Systems (WMS), Manufacturing Execution Systems (MES), and other applications management and decision-support software systems. Development of these technologies has involved partnering with target customers, government agencies such as DARPA and the US Navy, as well as select material handling equipment manufacturers in various pilot implementations and proofs-of-concept. Since their formal launch, Vecna has deployed across logistics, automotive, retail, and manufacturing applications, with customers ranging from Fortune 50’s to SME’s.

It is very likely that readers will be hearing more about the application of technologies such as that developed at Vecna among well-known service providers in logistics, warehousing, and material movement.