Supply Chain Matters provides an update to readers on Boeing’s prior petition of unfair pricing practices relative to Bombardier C-Series jets sold in the United States, specifically to Delta Airlines.

The U.S. International Trade Commission, today ruled against Boeing in the bitter trade case it brought against Bombardier. The unanimous 4-0 decision is being reported as a defeat for Boeing, which had argued to the U.S. Commerce Department that Bombardier’s trade practices were illegal and harmful to its business and its means to market and sell single aisle commercial jets in the U.S. The prior action called for upwards of 300 percent tariff duties to be imposed on C-Series aircraft sold in the United States, but that ruling no longer applies with today’s decision. 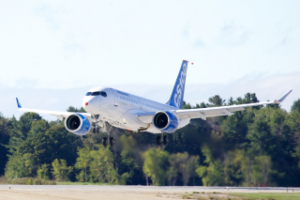 Boeing indicated in a statement that it will review the Commission’s more detailed findings in full after they are released.

As noted in our prior blog commentaries, Boeing’s actions drew direct responses from the governments of both Canada and the United Kingdom, each having major supply chain industry interests in the manufacturing of the C-Series. Boeing currently does not offer a 100-125 seat commercial aircraft offering, which added to the blowback.

The Boeing action later prompted what many in the industry described as a stunning joint announcement in October 2017, that being Airbus and Bombardier joining forces to market and sell C-Series aircraft. In what some in the industry termed as the “deal of the century,” Airbus agreed to acquire a majority stake in in the C-Series program, in-essence, throwing both a lifeline to Bombardier as well as adding its far larger procurement and supply chain resources to the program. The Wall Street Journal characterized the announcement as:

It is now believed that today’s ruling by the ITC will provide a more positive outlook for future sales of C-Series aircraft.

Meanwhile, Boeing is reported to be making overtures to Bombardier rival Embraer in some form of a deal to buy all or specific program parts of the single-aisle commercial aircraft producer. The challenge involved is that the government of Brazil owns most of Embraer, with strong domestic manufacturing and supply chain ties to that country.

Moving forward, Boeing will likely have to mend fences with both Canada and the U.K. for future sales of both commercial and military aircraft, along with certain U.S. airlines such as Delta and others such as Jet Blue who protested Boeing’s trade actions.