Investment and business circles are becoming much more concerned with Tesla after a series of cascading events that have occurred.

Business Network CNBC, financial media, and in-particular The Wall Street Journal have each been publishing reports of such growing concerns.

As we pen this Supply Chain Matters blog, Tesla’s shares have fallen over 7 percent this week in the wake of a selloff of tech-related firms. For the month of March, share have fallen a cumulative 28 percent.

More specifically focused to Tesla, was a disclosure that Moody’s Investor Services had downgraded a previous $1.8 billion August unsecured debt offering by one notch, which in-essence, downgraded the value of the bonds to 88 cents to the dollar. Moody’s attributed its downgrade to persistent negative cash flow and continued production ramp-up challenges with the Model 3 sedan.

Another event weighing-in on the selloff was a recent tragic accident that occurred in Mountain View California that involved both a Tesla vehicle, and perhaps its auto pilot technology. On Tuesday, the National Transportation Safety Board (NTSB) opened a formal investigation of the fatal Mountain View accident after indicating that the agency was unsure if the Tesla semi-autonomous driving system was in-operation during the accident. 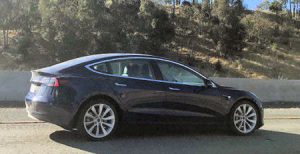 As noted in our most recent Supply Chain Matters blog focused on this innovative auto-maker, the eyes on Tesla’s operational performance are growing ever more impatient. A CNBC business network report earlier this week questions whether CEO Elon Musk is too focused on total automation of the Model 3 production process that may be hurting the ability to scale-up production more quickly. A prior CNBC report quoted one equity analyst as questioning whether Tesla would run out of money, given the company’s cash-burn rate, if production levels cannot be significantly increased for the Model 3. A WSJ Heard on the Street commentary published this morning (Paid subscription required) also makes the observation that Tesla will soon need to raise cash, and that action is looking to be more challenging. That opinion column also questions whether Tesla “would run out of usable cash before this year ends.” It further discloses the scenario that Model 3 demand may not be as high as previously communicated, citing a Bernstein research note published last week  that indicates that fewer than 30 percent of customers invited to take Model 3 delivery have elected to do so. That latter finding would tend to imply that the increased lag in deliveries have prompted select buyers to either rethink or postpone their Model 3 order reservation.

All of these new developments and added information, from the lens of Supply Chain Matters, are rather concerning.  Whereas the prime voice and architect of Tesla’s manufacturing and supply chain performance has been CEO Elon Musk, the building drumbeats call into question as to whether the company needs to lean on a more experienced and savvy operations executive who can provide day-to-day oversight. Our statement should not be perceived as a disparagement of the brilliance and creativity of Musk, but rather a call to a need for more experienced and pragmatic day-to-day operations focused leadership.

The business stakes related to Model 3 ramp-up are growing with each passing week, with the Q2 report of operational performance due out in early April being a significant test. Over-promising, under-delivering or added excuses are not likely to be well received. Now is the time for clear communication and performance.