The Paris Air Show is being held this week representing an important sales and marketing event for aerospace and commercial aircraft manufacturers and supply chain participants. Thus far, two dominant themes appear; one being efforts by Boeing to premiere or hint of new aircraft as well as added services, the other by aircraft engine producers and key suppliers, exercising influence as the critical link in commercial aircraft supply chains.

Boeing has focused this week’s event as the formal market launch of the newest version of the 737-aircraft family, that being the 737 Max 10. This latest model of the 737 can seat upwards of 230 passengers and has a reported list price of upwards of $125 million, but customers more than often acquire aircraft at discounted price levels. Industry watchers position the 737-10 as a market response to Airbus’s rather popular A320 neo series Boeing began the week by announcing 135 new orders for the aircraft, and thus far, visibility to individual airline or aircraft leasing companies have come forth, including a United Airlines order for 100 of the aircraft. The aircraft manufacturer expects to book orders of upwards of 240-250 aircraft. The 737-10 is expected to enter operational service in the 2020 timeframe. 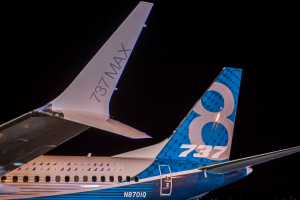 The president of Boeing Commercial Airplanes indicated to attending press that customers wanted the aircraft producer to build the single-aisle 737 bigger, and with more operating range.  From our lens, that is reflection of airlines being primarily-driven by financial metrics vs. customer comfort factors.  Anyone who has had to endure a 5-6-hour flight on a packed 737 with few amenities including lavatories likely know what we mean by customer comfort.  Welcome to the new world of airline travel, where efficiency trumps any sense of overall customer experience. But, we digress.

From a product development perspective, because of existing iterations of the 737, incremental product development and manufacturing costs for the larger model are relatively modest by comparison, boosting product margins for Boeing.  The supply chain is already in-place and ramping-up production of all models of the 737 family.

Industry media including Aviation Week report that airlines in general have a mixed view of the 737-10, mostly because of market timing and overall claimed capabilities. Boeing is therefore taking the opportunity to leverage this week’s event as a sounding board for the development of a new, smaller twin-aisle “middle-of-the-market’ aircraft with the designated name of the 797 series.

The conceptual 797 would by some accounts, be positioned between the 737, and the 787 Dreamliner, providing airlines more options in operating U.S. coast-to-coast or transatlantic flights airlines. Many in the industry view this model as a successor to the very popular 757 series.

For Boeing, the 797 series would be a test of quicker-time-to-market since by some accounts, airlines have expressed enthusiastic response to initial paper designs. A further critical design decision would be the selection of the aircraft’s available engines. Thus far, we have read indications that existing 737 MAX and A320 neo engine providers CFM International and Pratt & Whitney would be potential suppliers as well as Rolls Royce, which has up to this point, concentrated its product strategy on the larger twin-aisle segment. However, we read one show report indicating that executives from General Electric and CFM International have no interest in sharing a supplier arrangement with Boeing’s 797 series. Instead that are bidding to be the sole engine provider to assure a timely market introduction.

On the subject of aircraft engines, this week’s event has manufacturers in this segment touting their new engine orders. As an example, GE and CFM expect to book $15 billion in new business, both in hardware and services. GE Aviation indicated that its engine order backlog now exceeds $150 billion.

Beyond the marketing, as we have noted in our most recent Supply Chain Matters commentaries focused on commercial aircraft supply chains, engine manufacturers are currently the critical weak-link in the supply chains for both the A320 neo and the 787-MAX.  Pratt continues to deal with initial engine component design and manufacturing deficiencies related to its new geared turbo-fan (GTF) engines requiring the planning of whole engine spares to keep existing operational aircraft flying to schedule.  Engine supplier CFM International, the joint venture of GE Aerospace and Safran, producers of the new LEAP series engines experienced an initial quality problem in a turbine disc within operating engines of the first 737-MAX. At this week’s event, CFM International management indicated confidence in discovering root cause of the turbine disc flaw and expressed further confidence in meeting the targeted delivery of 500 LEAP engines by the end of this year.

Finally, industry and business press is highlighting the July start-up of Boeing’s newly announced Global Services Business Unit.  This week, Boeing management indicated expectations to garner much more of the estimated 8 percent of business services existing Boeing operational aircraft representing billions of dollars in potential added revenues and profits. The goal is to double annual services revenues to $50 billion in five years. Boeing management acknowledged the potential of a “healthy tension” with major suppliers, including engine producers, since many key suppliers rely on services revenues to boost their financial performance. Some engine producers are currently threatening to invest less in product innovation if Boeing insists on taking more market-share in services. That threat includes the currently contemplated 797 aircraft.  For Boeing to accomplish its business goals for services growth, it will need to convince major suppliers to give-up intellectual property as well as spare parts distribution rights. That is a tall order that is bound to lead to added supplier tensions. A further battleground will be the area of Internet-of-Things enabled service models where both aircraft manufacturers and suppliers are expected to clash on whom owns and controls customer-focused operational and services data. This is an area that bears quite a lot of observation in the months to come.