Beyond the current industry and or politically motivated speculation as to where this plant will be ultimately sourced and built are today’s new realities of major industry supply chain sourcing decisions, including fundamental power-train value-chain differences.

The plant itself is reported to be of a size capable of producing upwards of 300,000, vehicles per year and employing roughly 4000, an average sizing by today’s industry practices. Production is to be divided between both automakers and the plant has been targeted to be operating in 2021, four years hence.  That timeframe has important significance, both from manufacturing strategy, technology sourcing as well as a geo-political dimension.

In manufacturing strategy, the plan reportedly calls for the joint production of Toyota’s Corolla sedan and Mazda’s crossover SUV vehicles such as the CX5. In last week’s announcement, reports indicated that the two companies have been exploring various areas of joint manufacturing collaboration. More importantly, both companies recognize the strategic market shift toward vehicles less dependent on internal combustion powered vehicles, and more toward hybrid or electrically-powered vehicles. That has special significance in considering the 2021 timeframe. Mazda is especially in need of development of such vehicles, hence Toyota’s prior experience in its Prius hybrid and all-electric model family provides lots of proven product design and manufacturing experience. Subaru, reportedly also has a strategic partnership with Toyota for electrified vehicles. 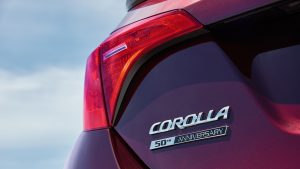 The fastest selling segment in the U.S. car market remains small to mid-sized crossover vehicles and the Toyota RAV4 stands out as a best-seller. To accommodate future demand, Toyota has linked its new Corolla U.S. sourcing decision with plans to boost RAV4 manufacturing capacity in the Canadian plant that currently produces the Corolla. The automaker will reportedly go-ahead with prior plans to construct the new manufacturing facility in Guanajuato Mexico, however that plant will now be designated to produce the popular selling Toyota Tacoma pick-up truck models, in-essence doubling existing production levels to accommodate rising demand across North America.

Toyota has been producing Corolla branded cars both in Canada and in the United States at a Mississippi production facility. In 2015, the Japanese automaker announced plans to construct a new $1 billion plant facility in Mexico, which was to be the new home of Corolla production. That caught the attention of the U.S. Presidential primary and election process, and specifically candidate Donald Trump who challenged the decision. In January, President Trump again criticized Toyota publicly for importing manufactured cars from Mexico to the United States while threatening to impose added tariffs on such cars. Mazda’s current sole presence in a manufacturing facility in Mexico, with lack of any current U.S. based manufacturing capability, exposes that company to trade and currency risks, given the current geo-political climate.

Reports indicate the eleven U.S. states are currently lobbying to land the new facility in their respective state. The short-listing is speculated to involve the U.S. South, Midwest, and Southwest regions. Many of the reported short-listed states have traditionally voted and elected Republican party candidates, hence another political dimension. Some business media publications point to the U.S. Southeastern region as a leading choice, from the notions of both a robust-network of existing just-in-time production focused automotive suppliers, existing modern transportation, and logistics capabilities, as well as tendencies to offer very attractive incentives to foreign-based manufacturers. The key determinant is noted to be labor force and best government incentives.

Supply Chain Matters hastens to add another determinant, one far more strategic. That of course, is the implied shift in power-train requirements in the 4-5-year timeframe, namely the inclusion of more lithium-ion battery packs in automotive product value-chain, along with lower direct-labor requirements via factory automation.

Current U.S. sourcing of lithium-ion batteries resides in the U.S. Western and Midwest regions, not to mention the flexibility or necessity of having such batteries or components shipped from Asian-based manufacturing. As our automotive industry-focused readers know all too well, batteries are heavy and rather expensive to transport over long distances. Thus, any direct labor or government incentives now need to be factored and balanced with the assumption of a more alternative energy focused product value-chain for Corollas or Mazda SUV’s. The good news is that automotive manufacturers have now matured auto assembly processes to be able to accommodate both predominate internal combustion and alternative energy powered vehicles on the very same assembly line.

From our lens, all the above implies that whichever state ultimately is chosen for siting, a key determinant will be strategic sourcing of battery production coupled with transportation and logistics capability and costs in the plant’s region.

The takeaway is that the tradition notions in automotive manufacturing that direct labor and local government incentives alone determine plant site selection are changing rather quickly with the increasing attraction, pricing and popularity of hybrid and electric-powered vehicles. A further new dimension is a reading of the geo-political environment in an era of increasing global trade tensions, one that features constant uncertainty as to tariff, trade, and intellectual property protection challenges. This week marks the start of talks focused on revisiting the NAFTA (The North America Free Trade Agreement), with the implication of an automotive industry highly dependent of the assumption of free-trade and movement of automotive value-chain components.