The Logistics of Valentine’s Day- One of Air Cargo Scale

Today is Valentine’s Day, a former religious holiday celebrated annually which is often recognized as a celebration of romance and love among many regions in the world.  Today’s holiday is traditional where family, students, couples and singles exchange greeting cards of sentiment, traditionally gift flowers, candy or other romantic gifts.

Happy Valentine’s Day to all. 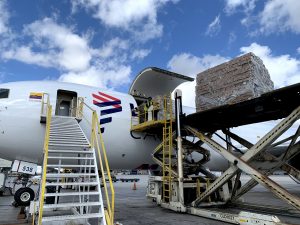 Today further represents the culmination of extensive specialized logistics and transportation involving fresh and perishable products, most notably flowers. Being the Supply Chain Matters blog, it is proper that we provide a spotlight on such efforts.

Latin America based LATAM Cargo reached out to us to call attention to a press release which points to the scope efforts that culminates in today’s holiday.

The carrier indicates that more than 210 LATAM Cargo Boeing 767-300 freighters originating from both Colombia and Ecuador, carrying 12,600 tons of flowers, represent a key response factor for the 2020 Valentine’s Day season. This year’s volume reportedly represented a growth of 45 percent compared to last year. Together with Mother’s Day, today’s holiday represents the peak of fresh flower export activities.

Similarly, other cargo carriers such as American Airlines have transported upwards of 410 tons of cut flowers among various global destinations over the past two weeks.  Similarly for FedEx , UPS and other major air cargo carriers.  And who knows, maybe this year, a few local drone delivered candies or flowers.

According to LATAM, roses, mixed bouquets and carnations were the stars of the fresh and cut flower holiday peak which started the week of January 14 and ended on February 10. Further noted was that chrysanthemums, iris, gypsophila and greenery were also big hits this season, mostly coming from Bogota and Medellin in Colombia and from Quito in Ecuador. Flowers were shipped to the United States, the Netherlands and China, among other destinations.  The cargo carrier notes that in all, this peak holiday response period was 2.2 times larger than an ordinary air cargo volume week in Columbia and 3.5 times larger in Ecuador, totaling 6,600 and 6,000 tons respectively. Such efforts obviously require a lot of pre-planning and contingency resources.

American Airlines noted its shipment surge during this same period originated from the Netherlands to various global regions including the United States.

Obviously, a global-wide sharing of love event does not successfully take place without significant months of pre-planning and resource allocation among all participants of various supply networks including various growers, manufacturers, distributors and online and local retailers.

Thus, as consumers affectionately gift their favorite flowers, candies and other gifts today, consider the overall planning and supply chain execution that has been invested to prepare for today’s holiday.

It is yet another reminder that Supply Chains Do Matter.