The litany of people, environmental and industry supply chain implications of severe hurricanes, storms and earthquakes continue for portions of the Unites States, Caribbean nations and for Mexico. Bottom-line, these events are extraordinary in timing , destruction and impact. 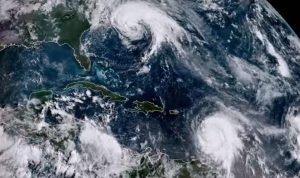 As we pen this blog update, a new storm, Hurricane Maria is churning among many impacted Caribbean nations while a weakening Hurricane Jose has begun impacting Northeast coastal regions of the United States before being forecasted to turn out to sea. A news bulletin indicates that a magnitude 7.1 earthquake rocked central Mexico, collapsing buildings, and scattering rubble on Mexico City streets. The latest quake came less than two weeks after another severe 8.1 magnitude quake left 90 dead in the country’s south.

Like Hurricane Irma, Maria’s strength has steadily increased to again be classified as a potentially catastrophic storm but different island nations are forecasted to be impacted by its path. It is still unclear if Maria will have a landfall somewhere in the United States.

As noted in a prior Supply Chain Matters update, the effects of both Hurricanes Harvey and Irma continue to evolve from many different dimensions.

The Texas Gulf coastal regions are the central hub for oil and gas well as petrochemical focused supply chains. Select oil refineries in the region are still struggling to return to normal refining capacity. Last week, about 2.4 million barrels of daily refining capacity was estimated to be offline because of the heavy flooding conditions that resulted from Hurricane Harvey. That included Exxon Mobil’s Beaumont refinery, Shell’s Deer Park refinery while the nation’s largest refinery, Motiva Enterprises Port Arthur facility remains in partial shutdown. At this point, industry watchers note that the biggest impact of the storm was to industry refiners, resulting in a much longer time than expected to return to normal operations. That impact will obviously be felt by many other industry supply chains either in added raw material or fuel costs.

Ocean ports in the region have managed to return to return to some forms of normalcy while surface transportation in rail and trucking remain capacity constrained.

Hurricane Irma which devastated certain portions of Florida had meaningful impacts to this region’s citrus agricultural regions. By some estimates, upwards of from 30 to 50 percent of major agricultural crops incurred losses. That included a large percentage of oranges, tangerines and grapefruit that were near ready to be harvested. Other crops impacted were avocados, tomatoes, and sugar cane. While it is too early for farmers to report complete estimates, it is likely that the crop damages will have impacts to food-related supply chains either in higher prices or potential shortages. Yet to be determined are the agricultural impacts of devastation among Caribbean islands including Puerto Rico.  That island has a substantial pharmaceutical manufacturing presence.

In all impacted areas, home improvement focused retailers, wholesalers and manufacturers are marshalling products to aide in the recovery and rebuilding process that will continue for many months to come.  That, in-itself is straining overall transportation resources especially trucking capacity across the U.S. resulting in spiking contract and spot market rates. With the holiday season, a mere 8-10 weeks away, logistics and transportation resources are likely to be constrained at least through the end of the year.

The cruse and vacation travel industry will likely experience the impacts of these extraordinary hurricane events as some popular destinations will be in recovery mode for many months to-come.

Industries have yet to determine whether the three natural disaster events that have already impacted Mexico during these past weeks will have an impact, but chances are they will in one form or another.

Both storms were of such impact with winds and record breaking 100-year-old rainfall levels, that environmental concerns are rising. Several air quality monitors were rendered inoperable by the storm. There are reports of rising pollution in certain portions of Houston area resulting in what is believed to be the leaking of thousands of tons of pollutants coming from damaged refineries and chemical plants. Last week, ozone levels in southwest Houston were reported well above national standards triggering Texas’s worst incidents of smog.  Five termed “superfund pollution sites” incurred heavy flooding because of Harvey. Fourteen chemical plants have reported wastewater overflows following the storm.

In certain areas of Florida, flooding caused massive sewage outflows. According to the Florida Department of Environmental Protection, power outages and flooding from Irma cased human waste to spill into streets, residences, and waterways across the entire state. One report we read pointed to more than 28 million gallons of treated and untreated sewage released in 22 counties with reports still being filed. Major incidents were reported in Miami and in Seminole County, north of Orlando.  Officials caution that it will take weeks for the full extent of the environmental impacts to assessed. In short, there is widespread concern about to risk to human health.

At this point, there is little doubt that industry supply chain teams will be managing the after effects of an incredible period of unprecedented natural disaster events that impacted portions of the United States, Mexico, and the Caribbean. We anticipate many additional commentaries forthcoming as teams practice supply chain agility. In the end, supply chain teams will again perform extraordinary acts of resilience to insure that line-of-business metrics and expected performance are met.