This five-day duration storm that first came ashore between the Corpus Christi and Houston coastal region as a Category 5 hurricane and subsequently discharged upwards of 50 inches (127 centimeters) of rain in the impacted areas. The human death toll now exceeds 70 with thousands of people having to evacuate their residences. The video and still images of victims and destruction were sobering to view. 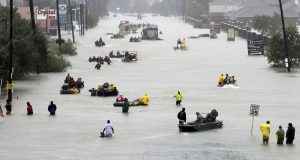 As we pen this update, much of the flood waters have begun to subside and recovery operations among federal and state agencies have been underway. Let’s address some important areas of impact concern.

The Houston area serves as a major distribution hub for many commodities and products because of its strategic location.

Three ports (Port Arthur, Port Beaumont, Port Orange) each located near the Texas Louisiana border and on the Sabine-Neches waterway, are reportedly the only of 28 total ports on the Texas coast still closed to ship traffic. Ships have not been allowed to enter these ports because of extreme river currents caused by Harvey. That stated, the Motiva Enterprise Port Arthur Refinery, the largest processor in the U.S. is supported by Port Arthur.

The Ports of Galveston and Houston, although open, are operating with certain restrictions. The Houston Ship Channel remains restricted to ships with 37 feet of draft or less, with transit limited to daylight travel only. Some initial reports indicated that it could be weeks before large oil tankers and container vessels would be able to safely navigate the channel.  That is a similar scenario to what occurred at the Port of New Orleans after Hurricane Katrina struck that region. Another report indicated that more than a dozen ships scheduled to call on Houston during the storm were subsequently diverted to other ports, as far away as the Bahamas and Mexico, during the five days of port shutdown.  That implies added transportation re-routing costs for businesses expecting such shipments. The good news was that the Houston Port Authority reported minimal damage or flooding to Houston’s port facilities and terminals, which is remarkable.

Houston’s Busch International Airport re-opened on August 31 while both FedEx and UPS resumed flight operations out of the airport. However, various ground delivery operations remain based on existing surface road and street conditions.

Demand for added temporary warehouse and distribution space is expected to continue as massive rebuilding and disaster relief efforts continue.

The likely key area of transportation concern remains with trucking.  Pre-and post disaster relief has consumed quite a lot of truck capacity, with these trucks being tied-up for multiple days due to road diversions and delays related to unloading goods in the impacted area. Reports have been circulating that truck rates are surging across the U.S. Southwest, due to overwhelming demand as well as rising diesel fuel prices, or in many cases, interruption in diesel fuel supplies. With the growing prospect that catastrophic Hurricane Irma will strike Florida or portions of the Southeastern U.S. region the demand for trucking is sure to get far worse. Businesses should anticipate far higher trucking rates, as well as potential capacity shortages, for several weeks hence.

As noted in our prior update, upwards of 30 percent of U.S. petroleum refining capacity had been shut down because of the storm. Fuel shortages were encountered within the impacted areas as well as other parts of Texas and the U.S. Southwestern and Southeastern regions. Gasoline prices across the United States have spiked more than 25-30 cents more per gallon from pre-storm levels. The Colonial Pipeline, which pumps major fuel supplies to the U.S. Southeast and Eastern Seaboard regions was forced to shut down because of the supply disruption.

With two significant hurricanes churning across the Caribbean, concerns are rising for increased fuel shortages among certain regions as emergency needs will take priority.

Many produced products and materials have their origins in petrochemical compounds and materials and thus disruption in this segment has widespread implication. The Gulf Coast represents 90 percent of the U.S. capacity to produce materials needed to product plastics alone. Commodities potentially impacted include plastic resins, polypropylene, ethylene, organic peroxides, among others.

An industry report indicates that upwards of 60 percent of the U.S. capacity to make ethylene and propylene, the most widely used input commodities, remains offline as petrochemical plants remain offline because of the lack of refined petroleum input. Thus far, manufacturers are expected to consume existing inventories of materials but many do not stock high levels of such compounds. Another concern is that rail lines servicing petrochemical complexes have yet to resume full service because of the heavy flooding.

Our last update reported on multiple explosions that occurred at the Arkema SA organic peroxides production facility in Crosby Texas.

This week, Newell Brands became the first manufacturer to issue a profit warning attributed to the effects of Harvey. All its plastic resin suppliers in Texas and Louisiana shutdown because of the storm and while Newell is actively seeking alternative resin supplies, resin costs are expected to be much higher.  Supply Chain Matters anticipates other investor warnings in the days and weeks ahead as the petrochemical industry attempts to recover to normal supply operations.

The Institute for Supply Management (ISM), authors of the widely followed ISM PMI Index, has issues a supplemental ISM Report of Business’ Hurricane Harvey Report. The report was a special survey conducted on August 31 among members of manufacturing and non-manufacturing supply procurement and management survey panels. Overall, the data collected indicates that the effect on production, new orders and employment levels will likely be minimal. Among the highlights: Two-thirds of responding supply managers believe that input materials pricing will be negatively impacted over the next three months.  A majority (56 percent) believe supplier deliveries will be at least somewhat negatively impacted over the next three months as-well. Prices and speed of delivery will, according to the survey, be the most strongly impacted.

This concludes our third reader update on the effects of Hurricane Harvey.

With the current news reflecting Hurricane Irma, the largest and strongest cyclone ever in the Atlantic, another hurricane following, and a major earthquake and hurricane impacting Mexico, it is likely that industry supply chain teams will remain highly active in business continuity support mode over the coming days and weeks.

It is clearly a very unprecedented time for disruption in the region.