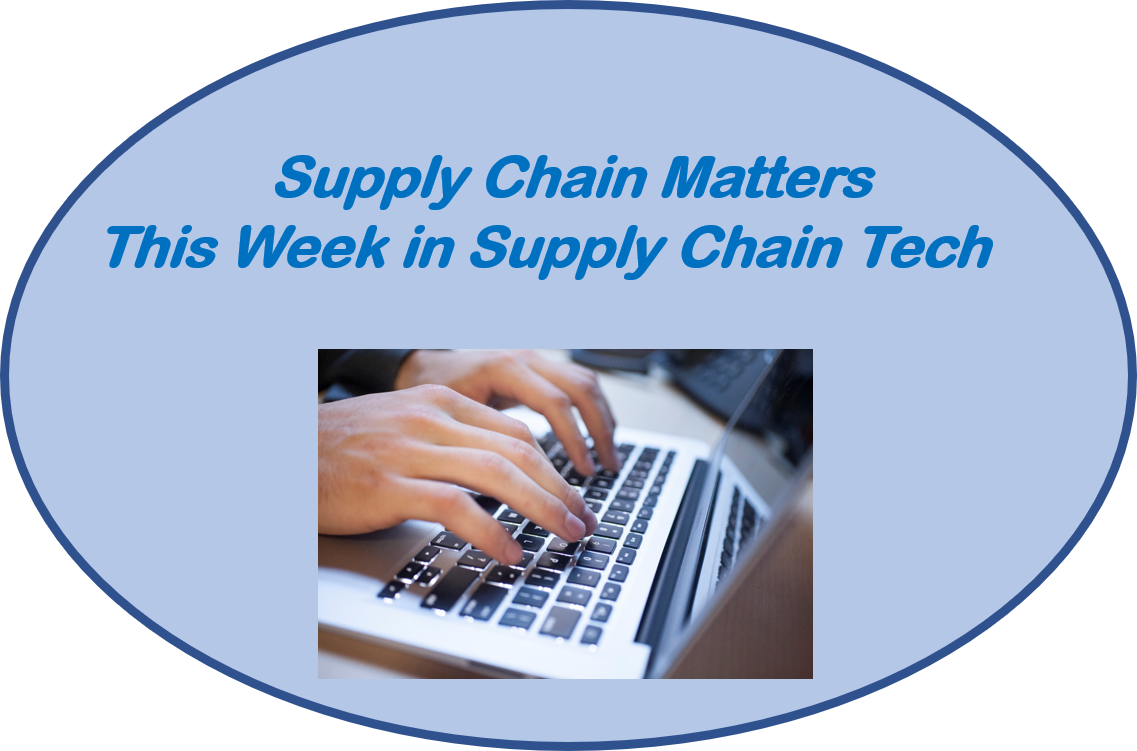 Note to readers: The following blog which originally published on July 20 is being re-posted because of a technical issue that has now been resolved.

This series presents a brief synopsis of noteworthy supply chain management technology as well as business investment news which we believe would be of specific interest to our global-based blog readership.

Our most recent publishing of this column series occurred on June 30.

The second half of 2021has begun with an active period of announcements related to technology, again in the Cloud based logistics and transportation technology segment.

Included in this edition are highlights of noteworthy announcements and/or developments from:

Uber, through its rideshare division Uber Freight, announced that the company intends to acquire non asset transportation logistics services provider Transplace from TPG Capital in a deal valued at upwards of $2.25 billion.

According to Business Broadcast Network CNBC, this deal consists of up to $750 million in Uber common stock and the remainder in cash. TPG Capital had previously acquired Transplace in 2017.

The companies indicated to CNBC that this acquisition will create one of the leading logistics technology platforms and comes at a time of accelerated transformation in logistics. That stated, the business network noted that this deal was a rare move for Uber which has spent the last year shedding non profitable businesses. That stated, this deal is likely aimed to boost efforts to make Uber Freight reach profitability sooner than its existing tract, with adjusted EBITDA estimated to be by the end of 2022.

This column’s last update related to Uber and its Uber Freight unit was a reported “Series A preferred stock financing” which was led by New York based private equity firm Greenbrier Equity Group.

Supply Chain Matters will provide a follow-up update regarding this deal at a later time.

Dubai based DP World, a large global operator of marine ports and inland cargo terminals announced earlier this month the acquisition of supply chain solutions provider Syncreon for a reported enterprise value of $1.2 billion. Reportedly, DP World has been on an acquisition spree in an effort to become a broader based, diversified global logistics service provider.

The deal is expected to close in the second half of this year.

Logistics equipment and item identification technology provider Zebra Technologies announced its intention to acquire start-up robotics provider Fetch Robotics in a deal valued at approximately $290 million. Reportedly both companies have previously been collaborating together on integration for online fulfillment. Zebra was also an investor in Fetch Robotics holding a 5 percent equity position.

Reportedly, the acquisition of the remaining equity of Fetch will be funded by cash on-hand and is expected to close in the fourth quarter of this year.

Zebra is a provider of hand-held item identification scanners and a variety of other mobile devices to track and manage inventory. Fetch’s Autonomous Mobile Robots (AMRs) are used for optimized picking in customer fulfillment and distribution centers, just-in-time material delivery in manufacturing facilities and automating manual material movements. The acquisition is aimed at further integrating both of these provider’s technologies to provide customers with a singular provider that can leverage item identification and collaborative robot technologies.

Blackstone announced that the private equity firm had entered into a definitive agreement to acquire Sphera, a provider of Environmental, Social and Governance (ESG) software, data, and consulting services, from Genstar

Capital. The investment, which values the company at approximately $1.4 billion, would be made through Blackstone’s flagship private equity vehicle.

Sphera works with organizations around the world to help them surface, manage, and mitigate ESG risk in the areas of Environment, Health, Safety & Sustainability, Operational Risk Management and Product Stewardship. The company reportedly has more than 3,000 customers in more than 100 countries.

Warehouse robotics and automation provider Berkshire Grey Inc. made a number of announcements in mid-July.

The tech provider announced that it will provide grocery-picking robots as part of a $23 million contract with an unnamed global retailer for online, same day, order fulfillment. The Berkshire Grey Intelligent Enterprise Robotics (IER) technology robotically reportedly picks grocery items from inventory and pack the items into customer bags to fill orders that are placed online and via mobile apps.

These July announcements follow an announcement on February 24 of this year indicating that Berkshire Grey entered into a definitive agreement with Revolution Acceleration Acquisition Corp that is expected to result in the tech provider becoming a publicly listed company early in the third quarter of 2021, subject to the satisfaction of customary closing conditions, including approval by the stockholders of Revolution Acceleration Acquisition Corp.

According to a published report provided by Walmart:

“Our latest solution is an industry-leading technology system poised to transform our supply chain and make warehouse work easier for our associates. Since 2017, we’ve worked closely with Symbotic to optimize the system by testing it in our Brooksville, Florida, distribution center. The brand-new technology system works to sort, store, retrieve and pack freight onto pallets. We’re using automation to revolutionize intake, increase accuracy and change how freight is handled at our regional distribution centers (RDCs).”

The retailer described the technology as a game changer:

“This first-of-its-kind tech when applied at our scale is revolutionary because, it gets products onto shelves for our customers even faster, while saving time for our associates. The new way of unloading store-friendly palletized trucks will make the process faster and simpler for our associates, allowing them to spend more time with our customers.”

No financial details have been shared regarding this deployment.

Aquiline Drones, a U.S.-based manufacturer of unmanned aerial systems (UAS) and a Cloud applications provider for commercial drone operations announced that it has purchased 50 percent of the capital of Aerialtronics, an end-to-end solutions developer headquartered in the Netherlands that utilizes drones, artificial intelligence (AI) and Internet of Things generated data to provide real-time insights for a variety of business operations.

Aquiline produces the Altura Zenith, a versatile commercial drone and the Pensar smart camera, a multispectral sensor, complete with artificial intelligence and edge computing capabilities.  This tech provider’s existing exclusive manufacturing and distribution licensing agreements with Drone Volt allows for the global production of both products along with the Hercules 2, a lightweight and compact drone.

Aerialtronics is a subsidiary of Drone Volt, a publicly traded French manufacturer of professional civil drones and embedded AI, with which AD partnered with in October, 2020.

The $9 million US dollar transaction is the latest acquisition for Aquiline in its continued commitment to becoming a full-scale, global leader in the UAS industry.

The recent transaction was based on Aerialtronics being valued at $17.92 million USD. Drone Volt will reportedly retain operational control of the company

Safety is reportedly at the heart of Volta Trucks, with its ambition of producing the safest trucks for use in cities. The Volta Zero was designed for electric from the outset, which facilitates a step-change in vehicle, driver and pedestrian safety. Thanks to the removal of the internal combustion engine, the operator of this vehicle sits in a central driving position, with a much lower seat height than a conventional truck. This combination, plus a glass house-style cab design, gives the driver a wide 220-degrees of visibility, minimizing dangerous blind spots. The prototype Volta was launched in September 2020, with the first vehicles expected to be operating with customers in late 2021.

The new prototype chassis adds the proposed production-specification frame and drivetrain and will be able to drive at normal road speeds. The prototype chassis is due to start a comprehensive testing program on proving grounds, with learnings taken into the production of a pilot fleet of vehicles expected to be delivered in late 2021. These vehicles will be tested by Volta Trucks engineers as well as being evaluated by key customers who have signed up for both testing and the option on the series production, to develop their understanding of how the Volta Zero will integrate into their operations. Full-scale production of customer-specification vehicles will then follow at the end of 2022.

Spend Intelligence and Spend Automation tech provider Simfoni announced that it has raised a total of $15 million in Series B funding led by Peakspan Capital.  With this funding, the company reportedly will significantly expand sales and marketing to meet increasing demand for its analytics-driven, turn-key Spend Automation platform, enabled by Artificial Intelligence (AI).

The Simfoni Spend Automation platform is described as a full digital procurement suite that provides more control for CFOs.  The software leverages Machine Learning (ML) and AI to leverage data to automate and streamline key aspects of the procurement process, while reducing third-party expenditures across the entire organization.

The company reportedly has over 100 customers across a wide range of industry sectors, including retail, financial services, manufacturing, technology, healthcare, and education, among others.

A note to readers: Supply Chain Matters will feature this column periodically as announcements warrant.