This Editor and supply chain industry analyst had the opportunity to attend the 33rd Annual Global Trade Day conference presented by The John H. Chaffee Center for International Business at Bryant University in Smithfield Rhode Island.
Overall, this was a great conference that featured upwards of 35 speakers very knowledgeable  in addressing today’s timely topics related to global trade. The theme for this year’s 2018 session, Technology in Global Trade, resonated well.
In the conference opening remarks session, Dr. Ronald K. Machtley, President, Bryant University stated it best: “The world is changing faster than you ever imagine, and with that comes enormous social and economic impacts.”
Many sessions were held concurrently, thus we will share highlights, insights, and takeaways from the sessions we managed to attend. In this first of other subsequent blogs, we highlight two very timely topics addressed. 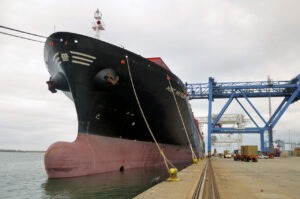 Economic Outlook
The opening keynote presentation, U.S. Protectionism, and the Future of Global Trade, delivered by Joe Brusuelas, Chief Economist, RSM LLP was an excellent, setting the tone for the current state of global trade. We often seek-out and feature highlights of economists’ observations because they are often astute observers, grounded in data, both quantitative and qualitative trending.
Brusuelas noted that 2018 is turning out to be the best economic year since the beginning of the financial crisis in 2005-2006, as global economies begin to normalize without major bank interventions. Trade volumes are approaching a cyclical high and are expected to continue thru 2020. However, risks loom large, as stated : “There are significant risks out there.” Among them:

One other highlight we share were comments related to the modernization of the NAFTA trade agreement, which Brusuelas observed as timely and welcomed. The speaker emphasized that over the last 25 years, there has been a development of a North America based supply chain: “one giant North America based economy”, now close to coming apart as negotiators run out of time for a 2018 agreement. When economists speak so directly, one has to assume that such an observation has significant meaning.
As Supply Chain Matters has often communicated to readers, industry supply chains such as those that support North America’s and other global automotive brands, the supply network, either component or sub-assembly based, transcends geographical borders. The implications for change and/or disruption can be significant, depending upon the final outcome of NAFTA and other trade talks.
Cyber Security and Operational Resilience
A further session we wanted to highlight addressed the topic of cyber security and operational resilience. Dr. Chris Demchak, Director, Center for Cyber Conflict Studies, U.S. Naval War College kicked-off a panel discussion session with an overview of the state of this top-of-mind topic.
Dr. Demchak’s knowledge of cyber security history and strategies is nothing less than extraordinary and one has to pay close attention to follow a waterfall of historic facts and threat landscape.  It is no wonder that she is part of the faculty at the U.S. Naval War College.
The audience was reminded of the original design principles that created the early Internet:

Dr. Demchak traced events to the current day notions of “cyber-conflict” where today, upwards of an estimated 1-2 percent of global GDP is lost due to cyber-theft and cyber-based information loss. The number was described as growing, and so is the threat level to individual nations, economies, and businesses. Further described were Four Levels of Systemic Threats, the top threat described as the Era of Wicked Bad Actors.
We will refrain from further highlights but suffice to state that Dr. Demchak’s messages were sobering and a wake-up call for the audience. She concluded her remarks with the takeaway message that every organization, large or small, needs to have  cyber risk and security safeguarding risk-mitigation plan.
To emphasize that point, Dr. Demchak shared that during last year’s severe malware attack that originated in Europe, global shipping line AB Moeller Maersk was one of many companies significantly impacted. By a “stroke of luck”, a couple of owned sites in Africa has inadvertently backed-up the entire Maersk database, which turned out to be blind luck in subsequent information recovery efforts. While that is no indicative of a strategy, it is profound reminder of the potential consequences.
Three other panelists, representing a local manufacturer, the State of Rhode Island, and Bryant University each articulated how cyber-security threats and what strategies have impacted their organizations have been initiated to counter such threats.

In a follow-on blog commentary, we will share additional highlights of this insightful global trade conference.
Bob Ferrari
© Copyright 2018. The Ferrari Consulting and Research Group and the Supply Chain Matters® blog. All rights reserved. 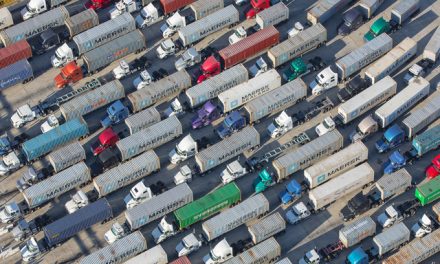 Implications of This Week’s OpenText and Google Joint Partnership Announcement