The Supply Chain Matters blog provides a capsule of noteworthy updates to prior global supply chain news developments from the past few weeks. 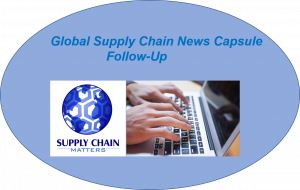 In an earlier May commentary profiling recent financial and operational company reporting: Industry Supply Network Response- Sampling of Bellwether Companies- Part Two, we profiled the global container shipping industry, specifically leader A.P. Moeller-Maersk. The headline was the strongest financial performance quarter in the shipping firm’s 117-year history. This was amid the ongoing disruption in global shipping resulting in erosion of service levels and the occurrence of unprecedented higher shipping rates.

We can add fifth ranked German based shipping line Hapag-Lloyd as added evidence of shipping line riches. The company’s recently reported Q1-2021 financial performance included earnings before interest and taxes (EBIT) of $1.5 billion, compared to $176 million in the year-earlier quarter. Reporting on the results, FreightWaves headline indicated that the shipping line raked in more profits in Q1-2021 than all of 2020.

First quarter revenue improved 33 percent to $4.9 billion, mostly attributed to higher freight rates. The average rate per twenty-foot container equivalent unit was noted as $1,509 in the latest quarter compared to a $1,094 average in the year-earlier period.

CEO Rolf Habben Jansen indicated to investors that results resulted from strong market demand, higher rates and operational bottlenecks. Ship delays reportedly tripled and that increased demand for containers have resulted in 20 percent additional delays in retrieving empty containers for new use. He further indicated: “Schedule reliability was at an absolute low in the first quarter. I think we’re going to start seeing improvement there.”

The carrier indicated that as a result of the latest quarter, an additional 150,000 TEU’s of additional container capacity will be added and that the shipping line will be in the market for adding new container ships to its global feet.

There are additional developments in efforts of two separate Canadian railroads, Canadian Pacific (CP) and Canadian National (CN) both competing to merge with a smaller U.S. rail carrier Kansas City Southern (KCS). The prize is the ability to operate a North America based single network rail connection spanning Canada, the U.S. and Mexico. Such a network could be pivotal to the newly re-constituted USMCA trade agreement.

As of late last week, reporting by Bloomberg and The Wall Street Journal indicate that the CN proposal has taken the lead after the larger Canadian rail operator agreed to add additional stock in its package to cover the $700 million break-up fee that would be due CP for KCS walking away from the previously agreed merger agreement. Canadian Pacific now has a five-day period to sweeten its offer or walk away with the break-up fee. CP indicated in a statement last week that the CN deal is “anti-competitive” and reiterated that it is “not going to enter into a bidding war” for the U.S. regional railroad. The U.S. Surface Transportation Board (STB) had approved a proposed voting trust as part of the CP deal but has not as of yet, taken-up the CP proposal.

However, specific analysts from Credit Suisse and Bloomberg Intelligence both opine that CP might not be out of the running yet, with Bloomberg indicating again that a CP-KCS tie-up may have a better shot at regulatory approval.

Indeed, in this evolving world heading towards more regionally based supply networks, a smaller U.S. regional rail operator has amassed a lot of interest and bidding.

A headline of a consumer economy that could see the fastest growth rate in nearly three decades, NRF now expects sharp consumer-led demand to continue to unfold over the coming months.  The NRF’s Chief Economist indicated that U.S. consumers are “sitting on a stockpile of cash” that could become “a spring-loaded spending mechanism.” NRF expects the U.S. economy to grow 6.6 percent this year, the highest level since 7.2 percent in 1984.

The retail trade organization revised its overall total number of 2020 retail sales to be $4.0 trillion vs. the $4.06 trillion previously reported, reflecting a 6.9 percent increase over 2019. The final NRF figure for 2020 holiday spending also dropped, totaling $777.3 billion and growing 8.2 percent over the same period in 2019, compared with an initial report in early January of $789.4 billion and an 8.3 percent annual growth. Even with those revisions, the numbers show spending was in high gear in 2020 despite the pandemic.

NRF is now forecasting 2021 retail sales – excluding autos, gas and restaurants, to grow between 6.5 and 8.2 percent over 2020, which is a wide bandwidth. That would equate to range of between $4.3 trillion and $4.4 trillion.

Such a bandwidth will likely provide added challenges for consumer-oriented business’s sales and operations planning as well as supply chain teams that are already managing wide imbalances among expected demand and constrained supply. The second half of 2021 will therefore likely be just as likely or more challenging.

Peloton Again in the News with CEO Apology

In late January, Supply Chain Matters highlighted for readers fitness equipment provider Peloton’s customer delivery frustrations and subsequent business impacts. This company’s equipment is not your average offering of in-home fitness. The company’s pricey bikes and treadmills are connected virtually, come with onboard cameras, microphone, and electronic screens.  At a cost that can approach $2500 plus, the company has created an upscale and hip image that includes well recognized customers. COVID-19 related demand for in-home fitness equipment caused the company’s machines to be in extremely high demand, with lagging supply. Some consumers were charged for their online interactive training subscriptions before their machines could arrive, causing a groundswell of social-media comments at the time.

After yet another social and general media disaster, the company’s CEO had to again apologize to consumers after initial refusal to do so. The U.S. Consumer Product Safety Commission had requested the company to voluntarily recall its Tread+ treadmill model due to reports of accidents concerning this treadmill model. The federal agency had advised consumers with young children or pets to stop using the Tread+ because of reports of dozen of injuries, and a least one death of a child, attributed to being pulled under the rear of the machine. The agency observed that the machine’s design of slats vs. a continuous belt and lack of a rear guard to the belt, posed a safety risk for small children and pets that might be in the room while the machine is in-use. Peloton’s machines are designed to have modern, sleek design and appeal to its segment of upscale fitness buffs.

The company initially rebuffed the agency’s call for a voluntary recall, calling the agency’s advisory inaccurate and misleading. The Wall Street Journal noted in its reporting that that some of the company’s customer service agents were at one point advising consumers with young children or pets that no refunds would be issued and to sell their machines if they were that uncomfortable.  The action was later changed after a barrage of consumer feedback.

The company is now offering inspections and repair, or full refunds for both the Tread and Tread+ machines.