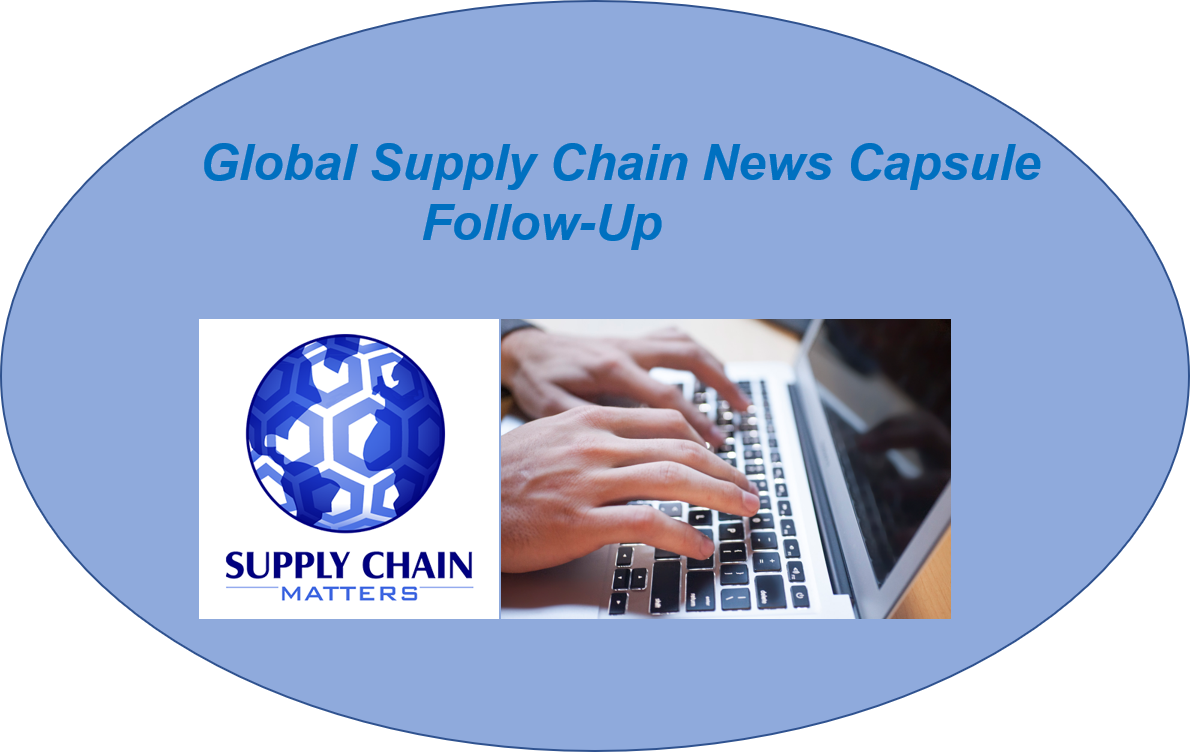 The Supply Chan Chain Matters blog provides an updated edition of our Global Supply Chain News Capsule. This series provides noteworthy news capsule updates to ongoing global supply chain and pandemic related news developments that we have previously highlighted for our readers as important areas to monitor. Our last entry in this series published on June 12th.

In this update, we highlight developments related to consumer electronics and semiconductor industry supply networks, including Apple, Samsung and TSMC,  increased COVID-19 infection rates in certain countries continuing to impact supply networks including Vietnam and Malaysia, and even more disruptions in global and domestic transportation and logistics.

Bloomberg reported this week that Apple has asked its iPhone suppliers t build upwards of 90 million of the company’s iPhones this year, a 20 percent increase over last year’s volumes.

The report indicates that the consumer electronics company has in prior years maintained a consistent initial plan for supply chain to support upwards of 75 million smartphones for the initial Fall production run that coincides with new product announcements. The report indicates that this more aggressive plan would suggest that he post COVID-19 economy will unlock additional demand for 5G enabled devices. Four updated models are reportedly being planned for announcement in September.

Taiwan Semiconductor Manufacturing Company (TSMC) reportedly is now planning for a 20 percent increase in product demand this year. The fabricator is a key chip supplier to Apple along with other high-tech manufacturers.

In conjunction with the company’s reporting of financial results, company CEO C.C. Wei indicated to reporters that the fabricator will additionally ramp-up production of microcontrollers by upwards of 60 percent this year to assist in boosting supply levels to accommodate automotive and other industry ongoing demand.

In its reporting, The Wall Street Journal indicated that some U.S. and European auto makers pressured TSMC to provide added priority for chip orders, forcing the fabricator to negotiate with other customers in freeing-up capacity for auto chip demand.

Reportedly, executives further confirmed that TSMC is weighing plans for a fab presence in Japan.

The company is reportedly likely to gain an additional increase in chip demand relative to Apple’s boosted iPhone production plans (noted above).

Report of Total Lockdowns Across Malaysia

Everstream Analytics reported in an advisory that a nationwide “total lockdown” imposed by increased cases of COVID-19 across Selangor and Kuala Lampur, both key regions for a large number of manufacturers clusters is severely impacting key manufacturing industries. Reportedly lockdown measures include the shutdown of all manufacturing plants with the exception of those producing food and daily essentials.

Nikkei Asia and Reuters report that three Vietnamese factories in Ho Chi Minh city supporting Samsung as well as a major supplier for Nike and Adidas have suspended operations after detecting COVID-19 infection rates within their facilities. The reports cite a government web site indicating that Samsung as temporarily cut its production workforce to 3,000 from 7,000 workers.

Authorities in Ho Chi Minh City have reportedly issued a directive that manufacturers must shut unless their employees are allowed to sleep on-site and our shuttled to and from work.

In what is noted as the latest pandemic related disruption, Trains reported that the Union Pacific Railroad has informed customers that it will temporarily halt shipments of containers from the U.S. West Coast ports routed to its Chicago intermodal terminal beginning this weekend. The move has been prompted by a backlog occurring at its Chicago intermodal transfer facility reportedly due to a shortage of ocean container trailer truck chassis along with drayage capacity challenges during periods of high volume. The suspension is reportedly expected to last one week.

This latest development is expected to have an additional major impact for U.S. West Coast ports, reportedly the equivalent of as many as 40,000 twenty-foot TEU’s being stuck at ports and unable to be moved. That is the equivalent of 50 double-stacked trains.

For the second time in two weeks, rail traffic remains disrupted in the British Columbia region because of raging wildfires that have damaged tracks and some railbed infrastructure operated by both Canadian National Railway (CN) and Canadian Pacific (CP) railroads. Canadian fire authorities have additionally requested the rail operators to suspend service in fire impacted areas with upwards of 300 wildfires burning across the province.

The rail lines impacted serve as a major import and export rail corridor serving the Port of Vancouver on Canada’s West Coast.  Grain, lumber and other industries are now impacted. According to Bloomberg, as of this week, upwards of 3,500 grain rail cars remained idled in the Vancouver corridor.

The Wall Street Journal’s Heard on the Street column noted that despite exploding product post COVID-19 demand surges across the U.S. economy, government data indicates that factory output is hampered.

The column indicates that in the first half of this year, factoring month-to-month volatility, overall U.S. factory output has grown a lackluster 1.1 percent and remains below pre-pandemic levels. One of the challenges is associated with the ongoing global shortage of semiconductor devices that is impacting U.S. auto manufacturing output. The report indicates that if autos were factored, manufacturing output would be closer to 2.3 percent thus far in the year. Government data further indicates that U.S. manufacturers reported an average output of 75.5 percent of manufacturing capacity, a level that existed before the pandemic. Further noted was shortages of skilled labor, component delays and transportation bottlenecks holding down manufacturing output levels.

We would add an additional component, that being the depressed state of commercial aircraft supply network manufacturing that is occurring across the U.S. because of halts to aircraft deliveries.