U.S. based discount airline Southwest Airlines declared an ‘operational emergency’ on Friday, due an unusually high number of grounded aircraft across its operational fleet with no one common theme evident regarding the numerous aircraft maintenance needs that have now prompted this crisis. The one apparent theme would appear to labor union related, but read on.

As a basis of the declaration, the airline demanded that that all mechanics show up for assigned work or risk termination, according to published reports from Business Network CNBC and the Chicago Business Journal.

In a released statement the airline indicated:

“To take care of our customers, we are requiring all hands on deck to address maintenance items so that we may promptly return aircraft to service. At the same time, our operational planners have been working in the background to minimize the impacts to our customers.”

Reports indicate that upwards of 100 scheduled flights had to be cancelled on Friday, with more than 1000 delayed, the most of any single carrier that day that was not weather related.  Southwest’s operational fleet consists of upwards of 750 Boeing 737 aircraft. Reports indicate that on Saturday, 39 flights were cancelled. The airline’s usual plan calls for anticipating upwards of 20 aircraft removed from service for unexpected maintenance issues on any given day. 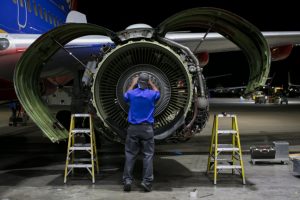 The airline has been in on and off labor union contract talks with its mechanics for upwards of seven years.

In a directive to mechanics, the airline indicated that workers “alleging illness” are required to provide a physician’s note upon return to work . Some workers will be required to work overtime and those refusing could face firing.

Members of the Aircraft Mechanics Fraternal Association which represents upwards of 2700 of Southwest’s mechanics posted a statement on the labor union’s web site that accused the airline of creating the current emergency. In the letter, the union’s National Director noted that this emergency declaration came nearly 10 days after U.S. broadcast network’s CBS News reported the FAA’s confirmation of the degrading safety culture of the airline, the level of coercion to further degrade safety while operating with the lowest ratio of technicians-to-aircraft of any major U.S. carrier. According to the union: “The CBS report exposed a problem so severe that two United States Senators have called for a congressional investigation.” Further cited was the following:

“On December 6, 2017, Vice President of Maintenance Operations Landon Nitschke characterized the state of Southwest’s safety culture by confessing:  “sometimes we hide our compliance issues under the Warrior Spirit.”  Nitschke vowed at that time:  “So big effort this year.  We definitely need to repair some things with the FAA not only as a Company, but, I think, as people … so again, compliance, compliance, compliance is going to be our theme song for 2018.”

The union’s National Director called on mechanics to not initiate a job action at this time but also not be baited into acts of defiance that would be characterized as insubordination. He urged members to get broken aircraft back into service in an airworthy condition but to resist any coercion to perform service not in accordance with federal law.

A Common Theme for Southwest

Supply Chain Matters initiated commentary as far back as 2009 when the airline was cited by the FAA for significant maintenance lapses at the time. We commented how many air travelers have more than likely experienced the quick, less than 30 minute turnaround of flight landings and departures, as well as the maximum utilization of aircraft during any given 24 hours of flight schedules. The unstated question was whether the emphasis of low cost and cheap airfares that leads to maximum utilization of aircraft use is adequately supported by required and properly scheduled maintenance. That question likely remains nearly ten years later.

In 2016, we highlighted a major outage of Southwest’s backbone airline reservation system that resulted in the delay or canceling of thousands of flights. Twelve percent of the airline’s scheduled flights were reportedly canceled over a subsequent five-day period. The outage was the worst in the airline’s history and likely cost tens of millions of dollars. Once again, we cited some observations:

Key labor unions of the airline, those that the reader can assume have first-hand day-to-day knowledge claim that the airline has focused too much on investing in stock buybacks and more cost controls rather than investing in needed IT and flight operations management investments. Company management naturally views such statements as a means to gain leverage and influence in ongoing collective bargaining for higher wages and benefits. Translation- we need to keep our costs down.

Later in that same commentary, this author stated the following:

Today, there remains continued evidence that airline route scheduling is planned to keep aircraft operating as long as possible in a 24 hour period. Maintenance checks appear deferred to the point of actual component failures, overall network scheduling with little or no tolerance for weather occurrences and/or expected delays. People and airline crews often appear overworked and not valued. In short, the industry has sunk to its lowest common denominator and the once industry innovator, Southwest, is spiraling to the point to joining the company of once stellar carriers such as American and United who have managed to reach the bottom in customer service ratings.

Once again, it would appear that operational crisis is indeed the basis of a call to action, while the underlying tenets of airlines consumed by maximum round-the-clock operations while not paying attention to preventative maintenance requirements, nor to the concerns or voices of its technicians. While some can argue that ongoing unionized labor tensions are part of the current crisis, it defuses from the underlying corporate culture that demands the “warrior mentality.” Such a culture is not just the purview of Southwest, other airlines or indeed new retail and now transportation industry disruptors such as Amazon.

While we as industry analyst’s can espouse the new future of machines able to communicate their operational status and alert to unplanned maintenance and repair needs, the needed element remains service technicians to monitor, asses and complete needed repairs and maintenance.

For Southwest, it is yet another public airing of internal operational problems that continue to fester. The difference is a noticeable increase in accident rates including in-air engine explosions and forced emergency landings.

It would seem that the current crisis should be the attention of the highest levels of the airline’s management structure because now the bottom line is indeed impacted.