The Supply Chain Matters blog has written extensively on the topic of global tariff actions and their cascading impacts on multi-industry product demand and supply networks.

The multi-year U.S. and China trade war was certainly a top-of-mind concern for industry supply chain management teams these past few years, but under the Trump Administration’s trade policies, their have been additional tariff tensions with the European Union. Indeed our Annual Predictions for Industry Supply Chains for the past two years were dominated by the effects of tariffs.

A published Bloomberg report picked-up by Business Network CNBC is garnering a lot of attention this week because it points to creativity in interpretation and understanding of existing trade laws.

This report concerns Delta Airlines and its abilities to take delivery of new aircraft produced by Airbus SE. The essence of the report is that Delta Airlines has managed to sidestep millions of dollars in U.S. tariffs on some European jetliners produced by Airbus by initially routing these jets outside of the U.S. The carrier has reportedly taken delivery of seven new jetliners by initially positioning these aircraft at overseas locations. 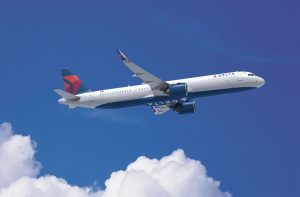 According to the report, within the rules related to European produced aircraft there is language that classifies an aircraft as “used” once that aircraft had flown for any reason other than aircraft testing and delivery. This loophole apparently avoids the imposition of a tariff even if the said aircraft eventually ends up flying from U.S. airports.

In the case of Delta, seven specific new single and wide aisle aircraft were flown from Airbus factories to locales such as Amsterdam, El Salvador, Jamaica, Japan and Mexico and placed into operational service flying from such countries. Eventually these aircraft made their way onto routes flying to and from U.S. airports to international locations.

The report indicates that the Trump Administration “appears to have created the very loophole Delta may be using” and quotes a former U.S. trade official indicating that this loophole did not appear prior to the 2019 imposition of 10 percent EU aircraft tariffs, and a subsequent increase of such tariffs to 15 percent.

In a statement provided to Bloomberg, Delta indicated that its actions enabled its aircraft deliveries to be “treated the same as foreign competitors’ aircraft, which allows us to remain competitive in the global markets we serve.” Yet, Bloomberg indicates in its report that publicly available data on imports collected by the U.S. would indicate that Airbus customers American Airlines and Jet Blue Airways were charged tariffs for new aircraft deliveries.

With this reported disclosure, the U.S. airline industry might indeed cry foul, since 15 percent tariffs on multi-million-dollar price tags are a big deal for the bottom line. Given the reality of a new incoming  leadership, they may lobby the incoming Biden Administration to make amends with the corresponding tariffs that the WTO has imposed as a result of rulings related to illegal direct government subsidies on the part of both EU based Airbus and U.S. based Boeing.

The other takeaway from this report is the probable reality that other global companies have found creative means to circumvent imposition of import tariffs by routing of finished products to alternative country destinations that eventually make their way into U.S. or EU markets. Multiple leg journeys are not an uncommon event among global based supply chains.

That stated, the tradeoff is when added costs or supply chain risk and disruption occurs, such as the COVID-19 impact on disrupting global logistics and transportation networks. Added movements and delays to final destinations add additional costs, inventory exposures, not to mention liabilities.

The same notions of creativity and ingenuity in the uncovering of trade law loopholes applies, and that is often the reality of global tariff actions. People and companies find an alternative means and the playing field is not always balanced or ethical.

Thus are the rules of competition in any “normal.”