This week and next, Supply Chain Matters will be revisiting our previously published Ferrari Consulting and Research Group 2020 Predictions for Industry and Global Supply Chains which published in early January.

As indicated in a prior commentary published in late March, the ongoing COVID-19 coronavirus pandemic has caused some need for changes to our predictions, but our theme of high uncertainty remains, along with some growing geo-political tensions brought forward with broader realization of the vulnerability of certain strategic supply networks.

In our industry-specific supply chain predictions, specifically high-tech industry, supply and customer demand networks, we predicted that the essential foundational tier of such networks, namely the semiconductor and packaged circuits segment would especially be embroiled in such ongoing changes.

In 2019, the escalating trade tensions occurring among the United States and China led to a U.S. declaration that certain technologies be classified as either strategic or subject to national security considerations. That resulted in the imposed U.S. restrictions on the ability of China based Huawei Technologies and other deemed high-tech manufacturers to procure strategic components from U.S. based suppliers.

U.S. semiconductor and packaged chip suppliers including Advanced Micro Devices, Broadcom, Intel and Nvidia were caught in the crossfire of such elevated tensions.  Industry sources and high-tech focused supply chain leaders indicated a growing concern as to whether strategic supply networks would turn toward a more near-shoring presence, diluting global expertise or economies of scale. 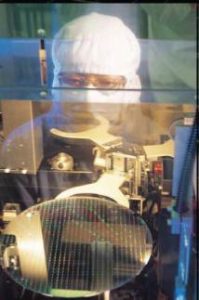 In April, the Asia based Nikkei Asian Review in a noted exclusive, that was also carried by the London based Financial Times, reported that Huawei had scored a semiconductor coup in the face of U.S. pressure. This report indicated that the Chinese telecoms equipment company has quietly begun to co-design mobile and automotive-use chips with a French-Italian company to insulate itself from a  potential hardening of US sanctions.  The joint development reportedly involved STMicroelectronics, a supplier to automakers Tesla and BMW.  Neither auto manufacturer acknowledged such an agreement. The reported implication was that if the U.S. were to impose tighter restrictions on contract manufacturing semiconductor fabs such as Taiwan based TSMC, a supplier to Huawei, this reported partnership would help to protect against any supply disruptions.

In late April, this blog highlighted a report by The South China Morning Post indicating that global contract manufacturing services (CMS) provider Foxconn, also known as Hon Hai Precision, and a key manufacturing arm to Apple, was accelerating plans to develop a semiconductor component supply chain capability internally within China. According to the report, the company signed a co-financing agreement with the government of Qingdao, a major city in eastern Shandong province, to erect and operate a semiconductor packaging and testing facility. Foxconn’s chairman was quoted as indicating to local media that this move will open up upstream and downstream semiconductor supply and accelerate (domestic) industry development. Our expressed view was the move is likely to provide yet another political flash point in the ongoing trade tensions involving both countries, and Apple will once again have to practice the company’s adroit geo- political appeasement skills.

A noted exclusive report appearing in yesterday’s editions of The Wall Street Journal (Paid subscription of complimentary metered view), reports that: “The Trump Administration and semiconductor companies are looking to jump-start development of new chip factories in the U.S. as concern grows about reliance on Asia as a source of critical technology.”

The report reiterates that the coronavirus pandemic has underscored concern by U.S. officials and executives for protecting global supply networks from disruption.  Particular concerns are directed toward TSMC, one of only three global-wide fabs capable of producing the fastest, most cutting-edge chips.

The report cites correspondence and people familiar with discussions, indicating that Trump Administration officials are in talks with both Intel and TSMC to build new fabs within the United States. TSMC indicated  to the publication that the manufacturer is open to building an overseas plant, but there are no concrete plans as yet.

This report contrasts the implications of such ongoing moves, namely the likelihood of the U.S. government spending tens of billions in industry incentives to expand domestic fabrication capabilities, along with individual chip supplier concerns as to whether any one chip fabrication provider would garner a strategic industry edge in domestic supply.

What it All Means

From our lens, these multiple developments provide evidence that indeed advanced semiconductor design, fabrication and packaging networks are subject to likely forces of change and likely added uncertainty over the next few years.

Indeed, semiconductor supply networks are being perceived as essential in strategic industry and economic growth including areas of advanced networks, artificial intelligence, alternative energy, autonomous driving, data science and national defense needs. The reality, however, is that leading edge technical development comes with a very high expense, and fabricators are unlikely to invest billions without some assurance of likely product demand and price advantage. New fabrication facilities take years to construct and there needs to be a highly skilled workforce to staff and operate such facilities.

Thus the question remains how committed respective governments and their legislators will be in such needs, given the overall cost, and the conflicting demands for other industry stimulus needs. High tech industry lobbying groups and individual companies will obviously weigh in as well.

Beyond the semiconductor segment are contrasting strategic needs deemed in the national interest, specifically that of the healthcare and safety of its citizens and healthcare providers. There are parallel developments calling for nations to more domestically or near-shore sourcing of healthcare, pharmaceutical and drug supply networks.

Other supply networks may follow, and the sum total is conceivably value-chain sourcing that was previously predicated on lowest cost or highest access to supplier competencies, to that of supply networks protecting national interests and economic priorities.

This will invariably present difficult challenges and turbulent waters for Chief Supply Chain Officers and Chief Procurement Officers  to sort thru and navigate over the coming months.