In both our summary and perspectives focused on August and July global PMI reporting, we echoed an increased trending toward declining global supply chain production momentum. We additionally noted trending indicating that many businesses were factoring uncertain product demand and supply network risks, and that was going to make industry supply chain strategies far more challenging in the weeks ahead.

Now, with September and full Q3 reporting available, global manufacturing activity has officially fallen below the 50.0 contraction threshold which is noted as the first time this has occurred since the depths of the global pandemic in 2020.

The September 2022 J.P. Morgan Global Manufacturing PMI® report, a composite index produced by J.P. Morgan and S&P Global was headlined as the global manufacturing downturn continuing as output and new orders continuing to decline.  The September value of 49.8 represented a 0.5 percentage drop from the August value of 50.3.  A further headline was business optimism sinking to a 28-month low as new order intakes declined for the third consecutive month and international trade flows contracted.

“The global manufacturing PMI saw output and new orders lost further ground in September, suggesting that global industrial production is slipping into recession. The orders-to-inventory ratio fell to another multi-year low last month as excess capacity continued to build at factories. The ongoing rise in stock-building is a worrying sign that demand is faltering and will weigh on activity deeper into 2H22. The September surveys offered a few silver linings, including signs of improving supply chain conditions and resilience in the labor market.”

Of added concern for supply chain strategy and planning teams is that output levels for intermediate goods, that representing industry supply networks, fell at the quickest pace in over two years. Reportedly, both new orders and new export business both fell at fastest rates in September, noted as the steepest downturns since June 2020. 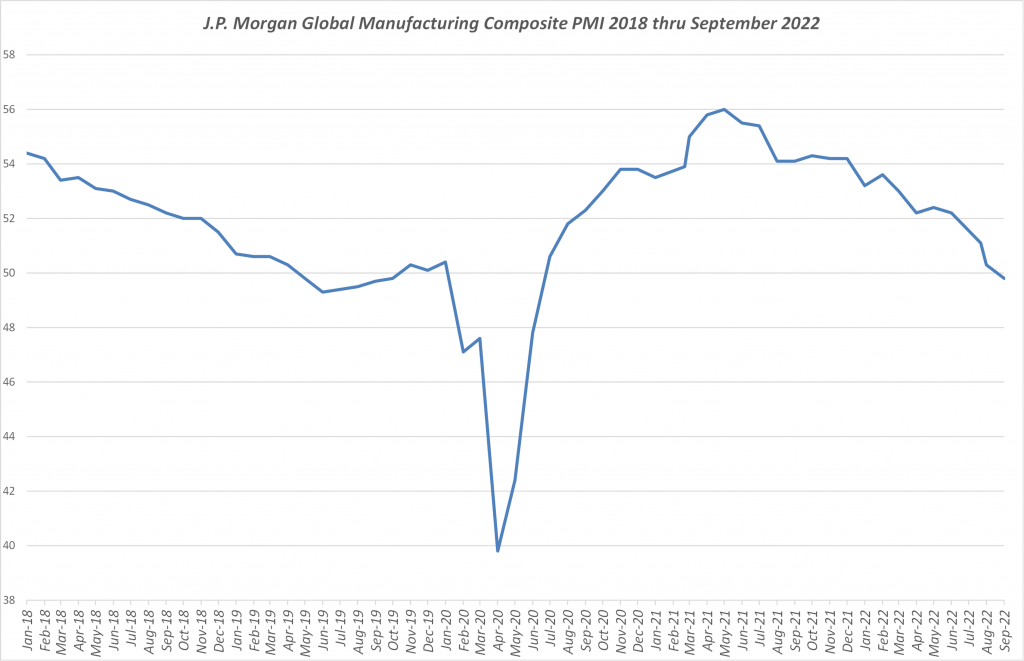 The above from our lens, is the classic sign of demand-driven contraction. Thus, global supply chains have now transitioned away from supply driven contraction to that of product demand driven. This is a significant milestone for ongoing planning and execution strategies.

The September S&P Global Eurozone Manufacturing PMI® again moved further into contraction at a reported value of 48.4, slipping 1.2 percentage points from both the August and July reported values. Noted were further declines in both output and new orders sub-indexes along with an added comment citing panelist input that lowered production output was a consequence of fading demand, the adverse impact of ongoing supply shortages and of faded customer demand.

Of continued concern, manufacturing powerhouses of France, Germany, Spain and Italy each continuing to remain at contraction level PMI values, with the former two regions reaching 27- and 28-month lows.  Ireland stood out as the only EU nation to record an expansionary PMI with a value of 51.5.

Similarly. the S&P Global / CIPS UK Manufacturing PMI® for September posted another contraction level value of 48.4, up from a 47.3 reported for August. This report’s headline was output and new orders falling further along with new export business declines.

The September S&P Global US Manufacturing PMI™ reported a value of 52.0 for September after falling to a two-year low of 51.5 for August. According to this report, production and new orders rose marginally while input cost inflation eased further. The narrative for the August report included an observation that demand for goods having now fallen for three straight months amid the ongoing impact of soaring inflation, supply constraints, rising interest rates and growing economic uncertainty.

The Manufacturing ISM© Report on Business reported a two-year low September value of 50.9, a 1.9 percentage drop from that of August, and lowest value reported since May of 2020.  Of particular concern, the New Orders sub-index declined more than 4 points, reaching a contraction value in September while the Inventories sub-index was 2.6 percentage points higher. Both of these provide clear warning signs for supply chain strategy and planning teams.

Other significant report highlights in this developed economies grouping was the index for Japan indicating that in September, new orders fell at the sharpest rate in two years, while a weakening Japanese yen drove manufacturing inflationary pressures higher.

The September S&P Global Taiwan Manufacturing PMI® once again remained rather concerning with the reported value of 42.2 at the end of Q3, reflecting four consecutive months of deteriorating manufacturing conditions. The September report headlines pointed to output and sales falling at the quickest rates since May 2020 and inventories dropping at the quickest rate for over a decade. Panelist sentiment regarding a 12-month outlook for output were noted as the second lowest on record.

“(Taiwan) Companies do not anticipate the situation to improve anytime soon, with business confidence regarding the year ahead hitting its second-lowest level on record. This was driven on fears that global economic conditions will weaken further, and demand across key markets across Asia, Europe and the U.S. will continue to decline in the months ahead.”

With Taiwan being a bastion of high tech and consumer electronics supply networks, the above commentary is indeed concerning. After benefitting from upwards of 18 months of double-digit export growth, the country’s Finance Minister warned this week that exports are expected to slow to a crawl through the end of this year.

The two recognized gauges of China’s manufacturing activity each reinforced demand-driven declining manufacturing momentum for September and for the quarter.

The official manufacturing PMI compiled by the country’s Bureau of Statistics reported a September PMI value of 50.1 compared to value of 49.4 reported for August. In its reporting of the country’s official PMI data, Reuters cited local economists indicating that the country’s manufacturing economy is struggling to regain traction after avoiding contraction in Q2. The government composite survey that includes which factors both manufacturing and services segments fell to 50.9 in September from a 51.7 value reported for August. Separately, Bloomberg reported last week that China’s industrial profit levels shrank during the first eight months of 2022 adding to economic as well as manufacturing financial challenges. Industrial profits reportedly fell 2.1 percent compared to year-earlier levels.

The Caixin China General Manufacturing PMI®, which is generally weighted toward smaller private manufacturers, remained at contraction value of 48.1 in September, compared to a 49.5 value for August and 50.4 reported for July. Report authors noted that a key factor in September’s index was an accelerated fall in new orders, the quickest rate since April. Panel participants reportedly cited travel and operations restrictions had muted overall demand. The sub-index for production fell for the first time in four months. Reportedly, concerns over repeated outbreaks of Covid-19 and the government’s ongoing zero-tolerance actions have weighed on optimism toward future output gains.

The September S&P Global India Manufacturing PMI® posted a value of 55.1, slipping from both the August and July PMI values in excess of 56. Report commentary noted a sustained increase in in new orders intakes with rates of expansion remaining historically high. The current expansion in manufacturing has now extended to 15 months. Reportedly, anecdotal evidence pointed to greater demand from domestic and international clients.

One of the most significant headlines related to this region was the announcement from Apple that the new model iPhone14 is being simultaneously produced both in China and India.

We continue to make mention of the S&P Global South Korea Manufacturing PMI® which continues to reflect a theme of a quickened downturn in the country’s manufacturing sector. The September PMI value fell deeper into contraction at a reported value of 47.3, slipping 0.3 percentage points from that of August and 2.5 percentage points from July’s value. The report authors indicated that global economic weakness weighted in on customer demand as manufacturing output slipped for the fifth consecutive month. New orders reportedly dropped significantly in September.

The country’s production decline is equated to the initial Covid-19 outbreaks incurred over two years ago. Report authors pointed to anecdotal evidence of excess inventory levels both at manufacturing and customer sites have led to current drops in output.

South Korea remains a technical and manufacturing hub for semiconductor, memory and high-tech supply networks and thus another barometer of declining production demand.

In this developing region category, we want to make mention of countries reporting increased levels of demand which we believe are a likely sign that businesses are actively seeking alternative sourcing of supply network needs.

The S&P Global Thailand Manufacturing PMI® reportedly improved at the strongest rate in that country’s survey history. The headline PMI posted a September value of 55.1 up from a value of 53.7 in August and 52.4 for July. This reportedly was the ninth consecutive month where the health of the country’s manufacturing sector has increased. The report pointed to especially record growth in September with strengthening client demand conditions.

Similarly, the S&P Global Indonesia Manufacturing PMI® for September was headlined with solid improvement in business conditions across the country’s manufacturing sector. Production levels reportedly rose at the quickest rate in eight months and supported by sharp expansions in new orders. The S&P Global Philippines Manufacturing PMI® in September rose for the first time since June to a value of 52.9.  The two most positive sub-indexes were new orders and production output with inflows of new business increasing in September. However, report authors indicated that demand increases were generally driven from domestic needs as opposed to export needs.

Among the six countries that our research arm monitors in the Developing Economies category (China, India, Indonesia, Mexico, Vietnam, Thailand) the average PMI value for Q3 was 52.1, 0.5 percentage points above the Q2 value, and 0.7 percentage points above the Q1 average value. Whereas developed countries PMI values have steadily declined thus far, developing countries have slightly risen.

Economists currently warn that these trends are subject to significant change as the rapidly increasing value of the U.S. dollar takes a measurable toll on developing countries economies and on U.S. export activities.

The September data is the clearest evidence to date that global supply chain activity levels are now reaching contraction levels. Concerns for a manufacturing recession are ever more prominent as global wide manufacturers transition into the final quarter of 2022.

Similar to what we noted as August’s PMI summary takeaways, accelerated demand-driven headwinds coupled with added global recessionary and geo-political concerns related to effects of the Russia-Ukraine hostilities and China’s potential economic stumble as a result of a strict COVID-19 isolation policy are more evident with each passing month. Contraction comparisons to that of 2020 during the heights of the Covid-19 pandemic are meaningful.

As we further opined in our August summary, the themes telegraph the likelihood of more declining global supply chain activity levels extending to the end of 2022 and into 2023 as well. Whereas the coming three months are generally viewed as a peak period for production and global transportation resource needs, there is building evidence that there is no supply nor transportation and logistics peak for Q4, primarily due to demand driven contraction coupled with heightened inventory levels. More manufacturers, retailers and businesses are now electing to more aggressively offload inventories over the remainder of this year.

We again reiterate that added scrutiny is especially important in planning and assessing product demand and supply needs as is a good amount of scenario-based business analysis. Uncertainty remains ever more a keen factor in planning and resource assessments especially as 2023 is likely going to be an especially challenging year for industry supply chains.