The Supply Chain Matters blog highlights March and Q1-2022  global manufacturing and supply chain indices, with the data indicating added headwinds and challenges in the months to come.

The data indicates a discernible shift in business and supply chain sentiment.

While developed regions have managed to sustain some production momentum, there are growing concerns related to continued high levels of cost inflation and added global transport disruption. Among developing regions, a continued near-term challenge are increasing rate of infection related to the BA2 COVID-19 variant and its impact on low-cost production regions, coupled with added transportation delays and disruption. 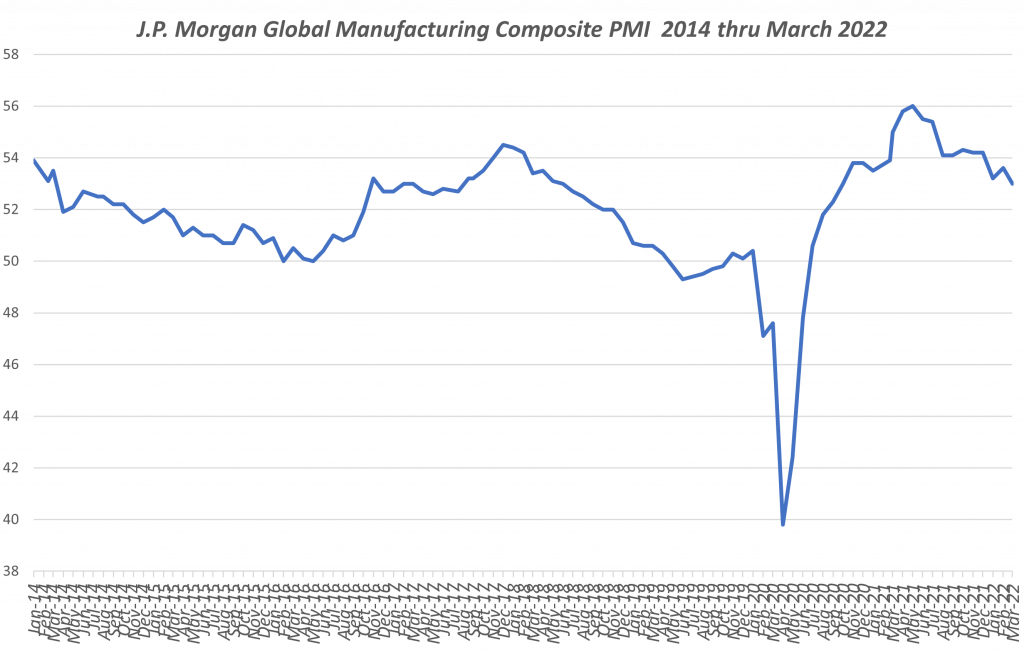 Specifically noted by the authors: “With the global manufacturing sector facing headwinds hampering growth, business optimism waned in March. Although companies still (on Average) expect production to rise over the coming year, the overall degree of positive sentiment dipped to a one-and-a-half year low”

The report authors further noted that the slowdown in manufacturing production was primarily focused in intermediate and investment goods industries, both of which reportedly saw output ease to “near stagnation” levels.

Indices reflecting manufacturing across the United States were mixed but remained generally positive.

The S&P Global US Manufacturing PMI™ reported a value of 58.8 in March, compared to a value of 57.3 for February. This report’s headline was output growth accelerating to the fastest level in seven months, amid a sharp increase in operating conditions.

The S&P Global Eurozone Manufacturing PMI® declined to a value of 56.5 in March, a 14-month low. That compared to February’s reading of 58.2 and a January reading of 58.7. Commentary pointed to a rise in geo-political tensions being mentioned as a factor weighing in on demand and having a noticeable impact on business confidence. Further noted by report authors was surging commodity, fuel and energy costs re-igniting input price increases in March which reportedly hit a four-month high. Eurozone manufacturers reportedly raised their end prices to the greatest extent in this series history.

The S&P Global Taiwan Manufacturing PMI® fell to a level of 54.1 in March, below the level of 54.3 reported for February and the 55.1 reported for January. The report authors noted that firms reported the first drop in export demand in 20 months. Reportedly, slower increases in output, new orders, employment and stocks of purchases weighted on the March index. Supplier shortages and rising inbound costs contributed to what was noted as a rapid rise in operating expenses, resulting in higher selling prices.

The official manufacturing PMI compiled by the country’s Bureau of Statistics dipped to a level of 49.5 in March, compared to a value of 50.2 for February, and 50.1 reported for January.

The Caixin China General Manufacturing PMI®, which is generally weighted toward smaller private manufacturers, reportedly declined to a value of 48.1 in March, compared to a value of 50.4 for February and 49.1 for January. Report authors indicated March’s production decline was the steepest seen in 25 months while the pace of renewed deterioration in business conditions was the quickest since February 2020.

The Guardian reported this week that the COVID-19 outbreak in Shanghai remains “extremely grim” with the city’s 26 million residents in lockdown, threatening to damage China’s economy and further disrupt global supply chains. A separate virus outbreak remains underway in the northeast province of Jilin, and the capital city of Beijing, where localized lockdowns are reported. Manufacturers in the virus impacted regions are attempting to maintain some form of production levels by following governmental directives to prohibit manufacturing workers from traveling beyond confined manufacturing campuses.

The S&P Global Vietnam Manufacturing PMI® declined to a value of 51.7 in March, compared to value of 54.3 for February, and 53.7 reported for January.

Commenting on the March data, Andrew Harker, Economics Director at S&P Global noted in part: “The surge in COVID-19 cases in Vietnam during March took its toll on the manufacturing sector, pushing output back into contraction territory. This was primarily due to labour shortages, as so many workers were off with infections that factories were unable to maintain production volumes.”

Global indices related to procurement and production activity across global regions for March are no longer reflecting the optimism indicated in February, and now reflect that of growing headwinds and added geo-political concerns related to effects of the Ukraine conflict and China’s potential economic stumble as a result of a strict COVID-19 isolation policy.

As indicated in our February commentary, an area of major concern remains the effect and duration of much higher energy prices globally along with the ultimate implications of heightened economic sanctions on Russia. There is also a developing understanding on what impacts there will be regarding supplies of key commodities that were sourced in both Russia and Ukraine.

We have begun to sense a noted change in tone among senior supply chain executives, one that reflects that a rethinking of processes and sourcing practices need to occur. As noted in our prior commentary, the bottom line remains that much work remains in the coming year in reexamination of existing practices in areas of supply network resiliency, cost inflation mitigation, added agility in logistics and transport networks and other dimensions.