As portrayed in our just published Supply Chain Matters Update Five related to the Ongoing Global COVID-19 Coronavirus Impact on Global and Industry Supply Chains, supply chain management teams have a lot on their plate right now. Other disruptions are not what such teams need right now, but teams dealing with manufacturing, farming,  energy and retail goods movement across Canada have their own unique disruption underway. 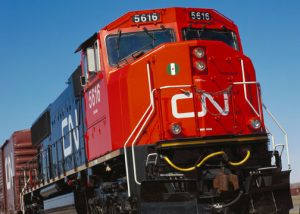 For the past two weeks, a group of protests in opposition to a proposed east-west natural gas transmission project conducted by leaders of Canada’s indigenous tribe leaders, has blocked a main east-west rail link that links cross-continent movement.

As of this weekend, the main blockage was located near the town of Bellville in eastern Ontario, essentially stopping rail movements from eastern Canadian ports to central and western Canada.

Yesterday, after two full weeks of protest, a court order from Canadian National Railway caused Ontario Police to forcefully dismantle the rail blockade and arrest the protestors. However, reports that we have viewed indicate that this police effort is likely to  threaten a fresh round of protests or other actions.

However, the disruption has had its consequences.

With three-quarters of Canada’s manufacturing capacity located in the eastern region, the Canadian Manufacturers and Exporters Association had estimated that up to C$450 million of goods per day were being stranded on either of this country’s major regions. Economists have warned that the blockade could shave 0.1 to 0.3 percentage points from the country’s February economic output.

Last week, The Canadian Press reported that backlogs have occurred among the country’s three largest ports, prompting some ships to divert cargos. Atlantic Container Line (ACL) which normally routes two container ships to the Port of Halifax has rerouted this traffic to the Ports of New York and Baltimore in order to transport containers inland via U.S. rail lines. The report notes that 4000 containers sit immobilized at the Port of Montreal, while the number of ships at anchor waiting to dock at the Port of Vancouver reached a total of 50 vessels last week.

The country’s largest supplier of propane fuel indicated last week that it has begun to ration distribution of propane gas in order to protect supplies for hospitals, nursing homes and remote households.

The bottom line is that another disruption involving Canada’s east-west rail transit routes is yet to fully resolve and that will be added burden for certain supply chain management teams in the coming weeks. That is in addition to the ongoing effects of the COVID-19 Coronavirus outbreaks.