The Boston Consulting Group (BSC) and C.H. Robinson have just released a new joint study, How the Panama Canal Expansion is Redrawing the Logistics Map, (sign-up required for complimentary report) which we feel should be essential reading for multi-industry sourcing, procurement, logistics and transportation teams. This study should motivate such teams to undertake more frequent and ongoing analysis of existing 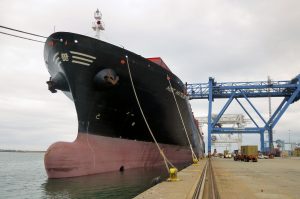 supply chain networks involving ocean container movements, in light of the opening of the scheduled 2016 expanded Panama Canal. According to this new study, the difference will be significant shifts in port volumes and resultant transportation costs.

The joint BSC-Robinson study predicts that by 2020, up to ten percent of container traffic bound for the United States from East Asia could shift their destination to U.S. east coast ports. According to the authors, that shifting volume is equivalent to building a port double the size of the existing ports of Savannah and Charleston. The study concludes that this container routing shift will permanently alter the competitive balance among U.S. east and west coast ports as well as the battleground region for determining the most cost efficient or service-sensitive assumptions in logistics and transportation routing.

Supply Chain Matters has previously viewed similar studies that analyzed the impact of the expanded Panama Canal on U.S. east coast ports.  We therefore reviewed in-detail, this latest joint study from BSC.  The research is grounded in a data point indicating that last year, 35 percent of East Asia container traffic was routed to U.S. East Coast ports. The baseline 2020 assumption of the report is that without the Panama Canal expansion, east coast share would rise to 40 percent if current economic. energy and shipping trends remain constant. However, factoring the upcoming Panama Canal expansion, the study authors predict that the east coast share could reach up to half of port volume.

Like any sound analysis, the BSC research tested three broad scenarios that included:

When all the analysis is included, the BSC model suggests the emergence of three classifications of ports:

BSC provides certain caveats. They include the very key assumption as to how efficient U.S. east coast ports become in their ability to efficiently unload and load the larger Panamax plus class of ocean container ships along with which of the four possible economic scenarios actually occurs. Supply Chain Matters has also raised such concerns, observing that the underlying logistical challenges caused by much larger container ships that affected U.S. west coast ports remain challenges for all U.S. ports that plan to service such ships.

We believe that the joint report outlined actions for readers bears consideration for multi-industry supply chain teams, logistics and transportation services providers as well as U.S. port operators and legislators.

This report’s takeaway for shippers is that the opening of an expanded Panama Canal next year will provide increased options but greater complexity. Shippers will likely need to take a much more segmented and detailed approach to possible supply routings that weigh cost vs. service time considerations.  We would not hesitate to add that this message implies more dynamic and frequent use of supply chain network modeling analysis techniques to provide product sourcing and sales and operations planning teams with continual analysis of the various cost and service scenarios for container routings.

For carriers, including U.S. railroads, the message is about interrelated decisions in investments, pricing, routing and customer development decisions. Investments in key U.S. east coast ports and supporting infrastructure is an obvious consideration along with a caution that future changes in key tariff rates could well change the overall economics for shippers. Reports indicate that investments in new warehousing and logistics facilities adjacent to the advantaged east coast ports has been steadily increasing and land costs are exploding due to this increased demand.

The BSC study concludes that time-sensitive cargo will continue to route through U.S. west coast while cost sensitive or high density cargos may have economic advantages in east coast port routings. Carriers need to consider these options.

For logistics services providers, the BSC message is to help shippers and carriers sort out these changing scenarios. For non-asset based LSP’s, there are key investment decisions remaining to be considered for customers and their routing needs.  BSC rightfully points out that LSP’s have the opportunity to be an important partner for customers in helping them to navigate these transportation changes.

Supply Chain Matters would add that carriers and LSP’s as a community, need to step-up and provide their customers with the added intelligence and service options they need to take maximum advantage of the Panama Canal expansion opportunity. We hasten to add that any entity looking to alter these decisions through self-advantage should be called out by shippers.

Finally, we re-iterate that individual supply chain teams themselves insure that they undertake their own analysis of their respective supply chain networks.  Such analysis can no longer be an occasional project but rather a more frequent activity matched to ongoing developments or events.

In this continuing environment of supply chain complexity and change, strategic and tactical network decisions should not be solely delegated to third parties, and remain the responsibility of individual supply chain teams.

© 2015 The Ferrari Consulting and Research Group and the Supply Chain Matters ® blog. All rights reserved.