With the majority of  September’s global PMI indices now reported, global manufacturing and supply chain activity levels continue to reflect a “V” shaped response from the beginning of the COVID-19 coronavirus outbreak.

From our Ferrari Consulting and Research Group lens, this trending is a reflection that many global based supply chain management teams have made significant and measurable efforts to address areas of product demand or supply disruption.

That stated, the next two quarters will be pivotal.

With the Northern Hemisphere countries approaching the Fall and Winter period where more populations return indoors, any second wave of virus disruption and/or added economic fallout will be a significant determinant to how the year 2020 ends-up and how the year 2021 begins. Availability of a global-wide vaccine is a further determinant. 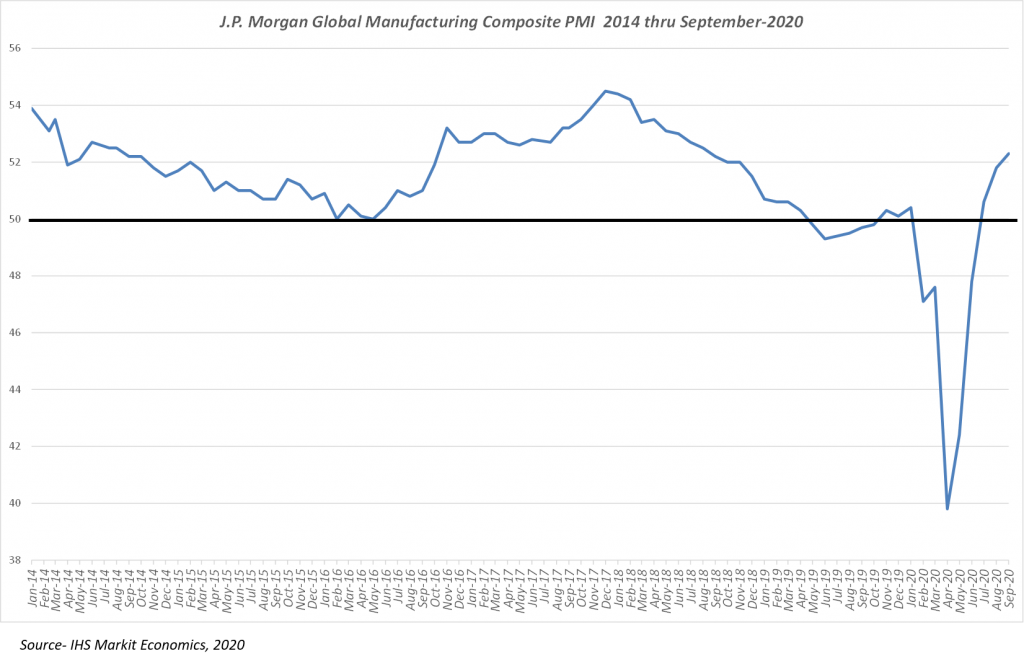 In effect, global volumes are now higher than the end of 2019.

The report authors indicate that business sentiment hit its highest levels since May 2018 and that the rate of increase in manufacturing production remained close to August’s 28-month high. Further reported was that concurrent expansions in new export business were seen across consumer, intermediate and investment goods areas for the first time since May 2018.

Among Developed Economies indices, the Manufacturing ISM® Report on Business® an index of U.S. wide manufacturing and purchasing activity was reported as 55.4 for September, reflecting a 0.6 percentage point decline from that of August. The overall average for all of Q3 was 51.6, a 5.9 percentage point increase over the average of Q2, and a 3.2 percentage point increase of the average of Q1. The authors noted that survey panel members reported that their companies and suppliers continue to operate in reconfigured factories and are becoming more proficient at maintain output. Panel sentiment was noted as predominately positive compared to cautious. Of the 18 manufacturing industries tracked in this index, 14 reported growth in September

A separate IHS Markit U.S. Manufacturing Index® was reported as 53.2 in September broadly in line with a 53.1 value reported in August. The authors indicated that contributing to the overall upturn was a quicker rise in output at the end of the third quarter with manufacturers indicating a solid , albeit slightly slower increase in new order flows. Commenting on the September report, a Chief Economist at IHS Markit indicated in-part that the upcoming presidential election caused companies to become more concerned and the U.S. sector looks to be entering the fourth quarter on a slower growth trajectory, adding to signs that final quarter growth will wane considerably from the third quarter rebound.

Continued momentum was the IHS Markit/CPIS UK Manufacturing PMI® which for September was reported as a value of 54.1 from the August value of 55.2, the latter value being a two-and-a-half-year highpoint. Output reportedly increased for the fourth consecutive month in September, with expansions seen in consumer, intermediate and investment goods sectors. New export business reportedly rose for the second straight month, attributed to stronger demand from Europe, Asia and North America. The September report did note increased numbers of firms noting uncertainty about the path forward regarding either COVID-19 and Brexit.

The Nikkei Taiwan Manufacturing PMI® reported the strongest improvement in operating conditions for two-and-a-half years at a value of 55.2 for September. That number was 3 percentage points higher than the value of August and 4.6 percentage points higher than the value of July. The September report indicated that total new work rose at a sharp and accelerated pace, hitting a 32-month high with stronger domestic as well as global demand. This significant bounce back is by our lens, a reflection of the typical Q3 ramping of high-tech electronics ramping ahead of the Q4 holiday period but may also be some initial indicators of work shifting away from China.

Of the four Developed Regions that we tend to monitor (Eurozone, Japan, Taiwan, United States) the average three-month Q3 PMI value was 50.8 compared to Q2’s average PMI value of 42.3, or the Q1 average of 48.8, the latter two reflecting a state of contraction. This reflects a solid sign of bounce back.

The standout for this grouping is clearly remains China. From being the original epicenter of the virus breakout in late December and early January there has been a consistent upswing in production and supply chain activity. China’s official government derived PMI was reported as 51.5 for September, while the closely followed Caixin China General Manufacturing PMI® which is more of a reflection of private industry reported a value of 53 for September. The latest Caixin report pointed to strong growth momentum with firms signaling further marked increases in production and new work, notably at the strongest rate since January 2011. Of note was that stronger external demand has helped to lift new export business to expand at the quickest pace since August 2017.

The other standout region was India with the Nikkei India Manufacturing PMI® September value of 56.8, the highest of all developing regions we monitor. The September value was 10.8 percentage points higher than the value of July when the country was forced to go on lockdown because of virus spread.  September’s value was noted as the highest in over eight years. Noted was that exports bounced back following six successive months of contraction. Amid loosened COVID-19 restrictions, factories reportedly went full steam ahead in production, supported by new work. However, as we publish this commentary, virus infection rates across India are again on the rise at an alarming rate. The next few months will likely present added challenges.

Vietnam’s PMI activity finally returned to growth. The IHS Markit Vietnam Manufacturing PMI® was posted as 52.2 for September, a 4.6 percentage point rise from July’s reported value. That stated, the overall average PMI value for Q3 was 48.5, reflecting contractionary forces for the early part of the quarter. The report authors indicated in the latest report that control over COVID-19 was a key factor helping to support improvement in operating conditions. Business confidence reportedly improved by the end of the quarter.

A concerning are remains that of Mexico, as the country has had a rather difficult time in dealing with the ongoing virus-related disruptions. The IHS Markit Mexico Manufacturing PMI® reportedly improved to a value of 41.3 in August. This index’s value was reported as 40.4 in July. Restrictions continue across the country with new work contracting for the seventh month running. New export orders have fallen at a substantial pace.

Of this grouping of Emerging nations (China, India, Indonesia, Mexico, Vietnam) the average PMI values for Q3 were 48.5, below the 50.8 of the Developed nations group. This is a reflection that with the exception of China, emerging nations are still being impacted in some way by the ongoing COVID-19 disruption. In proper context, the average of this category was 39.6 in Q2.

As noted in our ongoing highlights of reported global supply chain activity, their will likely be viewpoints or estimates as to whether both Q2 and now Q3’s data point to a sustained “V” recovery tract.  As noted in our opening comments, the test will be what occurs in Q4 and especially whether events related to the pandemic turn more optimistic.

In our commentary reflecting on Q2 PMI data, we opined that momentum seemed to be driven from renewed demand for consumer-focused goods within specific regions. The Q3 data points to added momentum now being reflected in intermediate and some investment goods. That is a meaningful and a cause for some optimism.

The first is that collective efforts in responding to this unprecedented disruption are showing results. Give yourselves a continued tip-of-the-hat for your efforts and dedication.

The second remains caution and staying strong to the inevitable trials that remain. Until various vaccine development efforts are deemed successful and global populations are administered the vaccine, uncertainty has to be the approach. In that context, the single, most significant new product global effort will be how vaccine distribution organization’s successfully accomplish vaccine delivery in the months to come. That will be the ultimate and sole determinant of sustained global supply chain activity response.