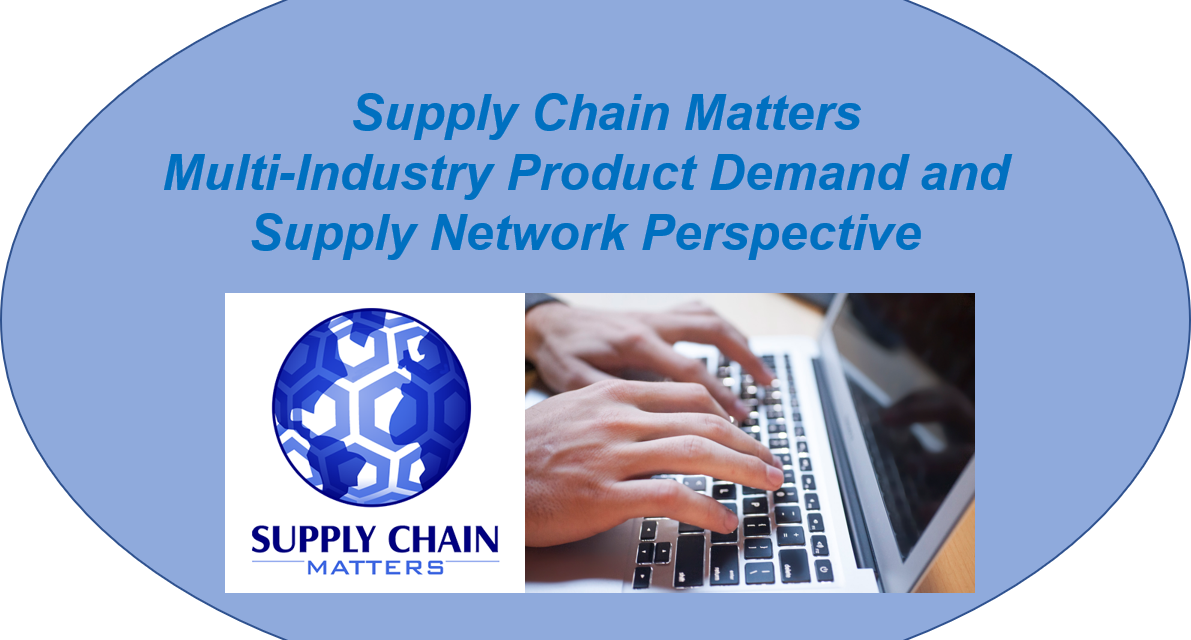 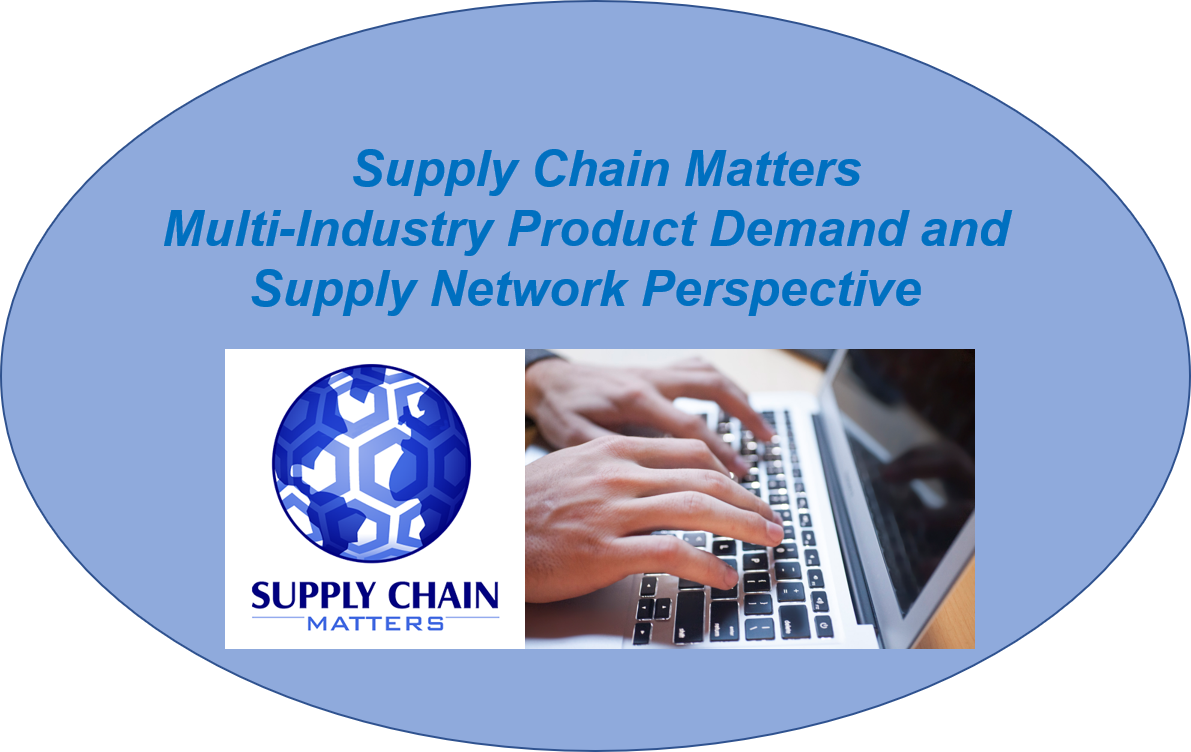 Published indices reflecting June-2021 and now Q2 ending global and regional purchasing and manufacturing indices (PMI) again reinforces that global production remains as it has been for several months, at full throttle. Strong warning signs continue to abound in multi-tiered capacity constraints, exploding input costs with subsequent price inflation, as well as elongated supplier lead times. There is now little question that the second half of this year will provide even more challenges and perhaps a few added surprises.

Reportedly, 22 out of 30 nations registered better operating conditions, but half of these nations saw their rates of expansion slow compared to May. Bright spots remained the Eurozone, with the United Kingdom, the United States and Taiwan. each reflecting continued momentum. Subdued growth was reported for China, Japan, India, Vietnam and Russia.

The five regions growing at the fastest rates in June were reported as Netherlands, Austria, Germany, Ireland and the United Kingdom. The five regions experiencing the lowest growth rates were reported as Colombia, India, Vietnam, Myanmar and Malaysia.  A common theme for this latter commentary were new outbreaks of COVID-19 infections impacting business conditions.

As noted in the graph below, global output levels remain at a seven-year high, but the curve of growth is again subsiding. 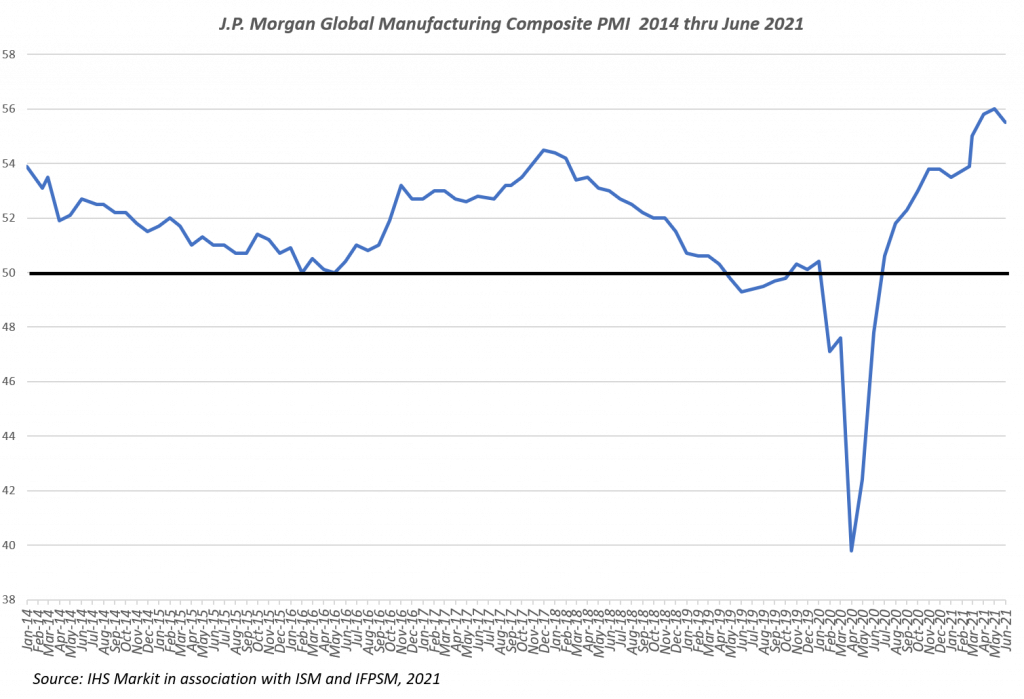 IHS Markit Eurozone Manufacturing PMI® posted a record high of 63.4 in June, setting four consecutive months of survey history record growth.  Improvement was noted in all three market groups (investment, intermediate and consumer) with investment goods producers reporting the strongest growth. Deliveries from suppliers were again noted as deteriorating at an “unprecedented rate” during June. Further reported was that European manufacturers ran down inventories of finished goods to the steepest degree recorded since August 2009. Input costs continued to rise with the Chief Business Economist at IHS Markit noting in-part: “Manufacturers are clearly willing to pay more to ensure sufficient supplies of key inputs”.

The Manufacturing ISM Report on Business® for June was reported as 60.6, a 0.6 percentage point increase from the May value of 61.2. Authors of this report continue to note that record long lead times, wide-scale material shortages, rising commodity prices and transportation delays were collectively affecting manufacturing segments. That stated, reportedly four out of five subindexes hat directly factor into the overall calculation of this index were in growth territory. ISM panelists reportedly continued to cite significant challenges in rising input costs, transportation disruption along with attracting and retaining labor among internal and supplier facilities were limiting production. The separate IHS Markit U.S. Manufacturing PMI™ was unchanged at a value of 62.1 in June. Authors of this index noted that the increase in business activity was the strongest since data collection began in May 2007, but: “Output growth was weighed down by ongoing and severe supply chain disruptions, and reports of labour shortages.”

China’s manufacturing activity contracted slightly in June. The Caixin China General Manufacturing PMI®, which is generally weighted toward smaller private manufacturers, declined to a reported value of 51.3 in June, a decline of 0.7 percentage points from the 52.0 value reported in May. The authors noted that new business expanded at a slower rate in June with recent upticks in COVID-19 infections domestically and abroad dampening growth.  Reportedly, panelists frequently mentioned that a lack of inventory stocks and logistical delays related to the pandemic hampered supplier performance. The official manufacturing PMI compiled by the country’s Bureau of Statistics, which tends to be weighted toward large enterprises and state-owned manufacturers, was little changed at 50.9 for June from a value of 51.0 in May. The statistics bureau pointed to contractions in the production sub-index for vehicle manufacturing, a reflection of the ongoing semiconductor shortage for autos, while power supply and coal shortages impacted other industry segments. New export orders reportedly contracted for a second month with media speculation that the operation disruption at Yantian port and local virus incidents in the southern region impacting this area.

Further of mention is the IHS Markit Vietnam Manufacturing PMI® which sharply fell to a value of 44.1 in June from a value of 53.1 in May and 54.7 in April.  The headline of the June report was the impact of the latest wave of infection leading to company shutdowns in some areas and worker restrictions in other areas.  Output and new orders reportedly decreased at the sharpest rates since the initial outbreaks of the virus in early 2020.  Stocks of finished goods further decreased in June. With this region serving some supply chain management networks as a resiliency back-up to that of China, particularly in the high-tech sector, this is surely an area of concern entering the second half of the year.

Implications of June and Q2 Data

The June data more clearly reflects a stark imbalance of robust multi-industry product demand levels driven by major economies now opening up with ongoing material shortages, elongated supplier lead times and global transportation disruptions now making a quantitative impact on expected output and business levels. Those shortages have now resulted in signs of a lack of flexibilities in production and transportation capacity because of either increased labor shortages or ongoing disruptions.  The demand and supply imbalance of global-wide vaccines is now a far more contributing factor.

If one views a graphical chart of PMI data among the Emerging Economies (noted below) the disparity impacts of populations remaining to be vaccinated and new more contagious variants of the virus occurring in these regions have caused each region to have a different plot than that of Developed regions. India and Vietnam are now especially impacted at this point. 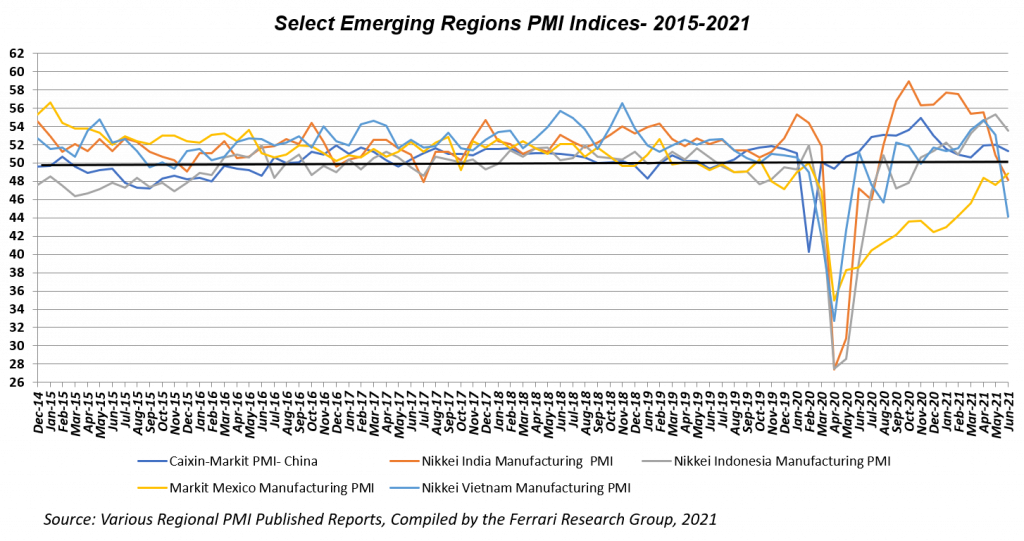 While Developed regions continue to struggle in efforts to overcome direct material supply shortages, ongoing unprecedented global transportation delays and uncontrollable increases in supply chain related cost segments, Emerging regions enter the second half of the year with challenges to be able to vaccinate more people as well as control and mitigate local outbreaks.

Our research arm via Supply Chain Matters has contributed commentaries that have reflected themes for best preparing for the second half of 2021:

There Remains A Demand And Supply Imbalance For Supply Chain Talent

Global Shipping Disruption Is Ongoing And So Are The Consequences

The now visible themes of Q2’s global production and supply chain indices now imply that supply chain management and business operations teams could benefit by a temporary breather in activity, allowing needed time to realign planning, execution processes and longer-term resources planning. That luxury does not appear on the immediate horizon.  Instead, many are likely thinking that more disruptions and their implications are in-store.

Once again, while industry and global supply chains were the saviors of many businesses in 2020, the scenario is far different and far more challenging in 2021.