Overall, the J.P. Morgan Global Manufacturing PMI was reported as 49.6 in June, the second consecutive month of a state of contraction .  The average PMI index for all of Q2 was 49.6, which represents a 0.8 percentage point drop from the average of Q1-2019, and a 1.7 percentage point drop from the start of 2019. More concerning is that the report indicates that production levels fell for the first time since October 2012  while new business shrank at the fastest pace since September 2012. The back-to-back sub 50 readings last occurred in the second half of 2012, providing an indication that the six-year growth run has reached a stumbling point. In the graphic noted below, we track this index from 2014 to date. The current cycle began at the contraction point in Q1-2016, peaked to its highest level during Q3-2017 and has now declined precipitously to its current contraction state. 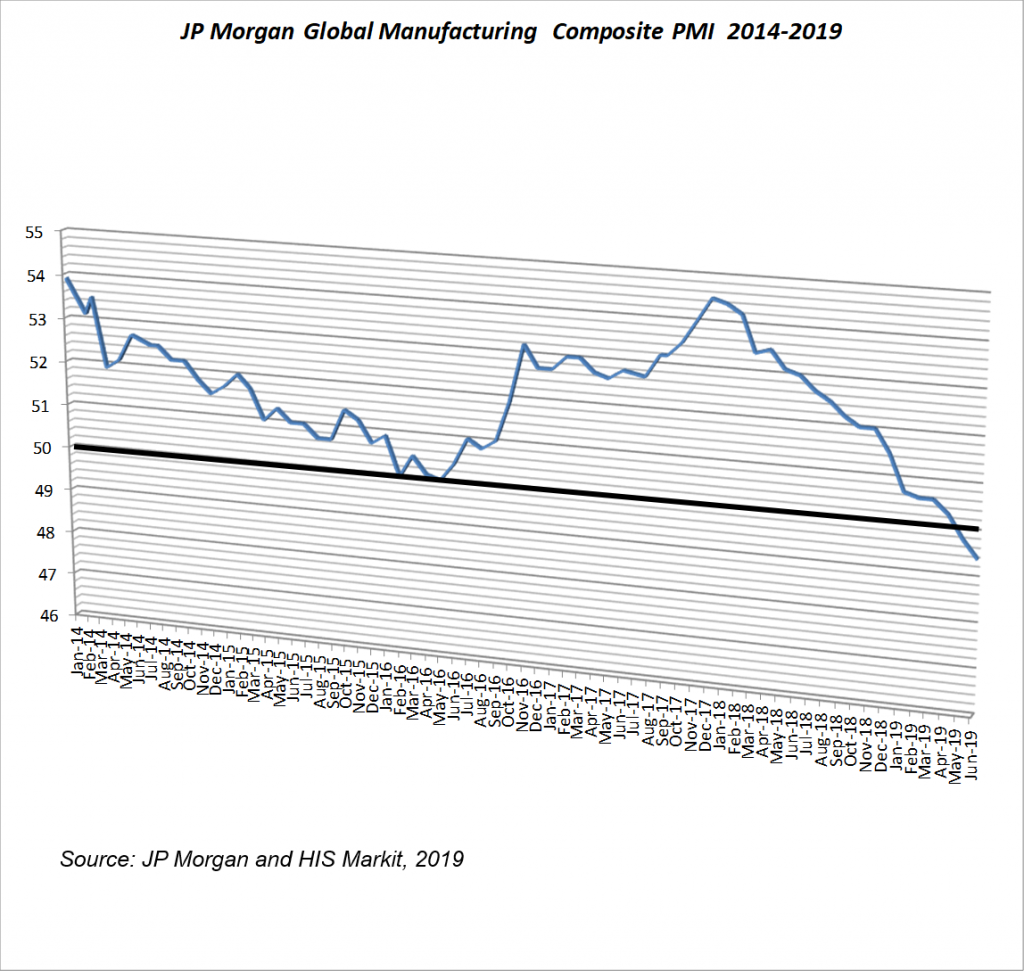 The report authors indicated that of the 30 nations that make-up the index, 18 have signaled contraction, to include China, Germany, and Taiwan, all powerhouse manufacturers. The United States, Australia, Brazil and India were noted as larger industrial nations still registering expansion.

The June 2019 Manufacturing ISM Report on Business was reported as 51.7 for June, now reflecting three consecutive months of decline. The Q2 average of 52.2 reflected a 3.2 percentage point decline from Q1’ s average reading. While the U.S. has weathered the 2019 global slowdown, increased concerns regarding trade tensions with China, Mexico and the Eurozone has weighed on results. Somewhat concerning was June’s New Orders index declined 2.7 percentage points, New Export Orders index declining 0.5 points and the Inventories index declining by 1.8 percentage points. Yet, of the 18 manufacturing industries that make-up the U.S. index, 12 reported growth in June. It will be interesting to note if the imposed U.S. government’s supply ban related to Huawei Technologies and other select Chinese high-tech manufacturers will impact the Computer & Electronic Products category reporting in the upcoming quarter.

Other concerning regions included Mexico, as the June PMI of 49.2 drove Q2’ s average PMI into contraction territory at a value of 49.8.  The Markit Eurozone PMI remained well below 50 with the average of Q2 being 47.7, a further 1.4 percentage point decline from the average of Q1. The CIPS UK Manufacturing PMI indicated contraction territory for the second consecutive month, clearly the ongoing effects of the uncertainty surrounding Brexit.

Our Ferrari Consulting and Research Group review of indices among five developed regions (Unites States, Eurozone, Japan, Taiwan) reflects an overall average Q2 PMI value of 49.2, a slide into contraction. The United States now remains the only developed region with continued momentum, but as noted, there are clear signs of declining momentum. The most concerning region is that of Taiwan, with the average Q2 PMI now at 47.4, a reflection of that country’s dependency on China’s manufacturing economy.

Our ongoing review of indices among six developing regions (China, India, Indonesia, Mexico, Vietnam, Thailand) reflected an overall average Q2 PMI of 50.8, an indication that developing countries are holding their own in manufacturing growth, despite a continued global slowdown. Other data points- Malaysia’s average Q2 PMI reflects a 3.6 percentage point increase since the start of this year, while Myanmar’s P is trending at a 1.1 percentage point increase sine the start of this year.