Pushback Regarding Broader Deployment of Blockchain Technology in Ocean Shipping

There has been a development in the ocean shipping sector involving efforts to leverage blockchain technology to better enable efficiency and security in global trade.
A published report by SHIPPINGWATCH (subscription required) indicates that number two and three global ocean container lines are indicating that the ongoing pilot blockchain technology proof-of-concept pilot being developed jointly by industry leader Maersk and IBM does not seem to meet the criteria for a joint-industry standard. 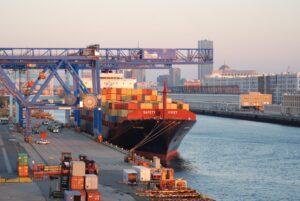 Hapag-Lloyd and CMA CGM executives expressed concerns at a recent industry conference in Hamburg, specifically to the blockchain and other digital projects underway. Hapag-Lloyd CEO Rolf Jensen reportedly indicated that while the technical approach by Maersk and IBM is a good one, it will require an industry governance that makes it an industry-wide process platform. He further added that if five to seven carriers can work together, meaningful progress could be made to benefit shipping customers.
The CEO of Maersk, Søren Skou, indicated to the publication: “It can certainly not be ruled out that we at some point will look at ownership structure.”
Developments such as this are rather common for industry-wide technology adoption as industry participants protect their competitive interests. There are often concerns as to which parties will gain additional revenues with the offering of a technology-enabled service that can provide benefits for the industry and for industry supply chain teams. We have observed this phenomena in other major tech deployments involving broad industry adoption.
This latest development comes after an announcement in January indicating Maersk and IBM intentions to establish a joint venture to provide more efficient and secure methods for conducting global trade using blockchain technology. The aim of the new company was stated as the ability to offer a jointly developed global trade digitization platform built on open standards and designed for use by the entire global shipping ecosystem. IBM further signed some bigger-name consumer product producers to also be a part of the blockchain pilot initiative.
The announcement in January indicated that Maersk and IBM would establish an advisory board of industry experts to help shape the platform, services need, guidance and feedback on industry factors and use of open standards. Supply Chain Matters had  especially applauded this move in our January update.
This week’s statements by influential shipping line executives would seem to indicate that industry players remain concerned on the tenets of an industry-wide shipping process and technology platform. That so-named advisory board of industry experts now has an agenda to pursue.
Expect more behind-the-scenes efforts to occur in the coming weeks and months.