Posted by ferrariadmin | Mar 23, 2014 | Procurement and Sourcing, Transportation and Logistics | 0 |

The termed P3 Alliance which calls for an alliance among the top three largest ocean container companies to pool shipping assets across major routes gained arrival last week from the U.S. Maritime Commission.  As noted in our previous commentaries, this alliance pools the shipping resources of 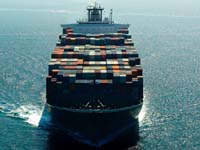 Maersk Line, CMA-CGM, and Mediterranean Shipping across what is estimated to be up to 40 percent of total cargo moved in containers from Asia to Europe, as well as other major trans-Atlantic and trans-Pacific ocean routes. This proposed alliance network still needs the approval of European and Chinese regulators in order to consummate their network.

As noted in our ongoing commentaries regarding the proposed P3 Network, smaller shipping lines, cargo forwarders and maritime fuel suppliers all objected to this arrangement for fear of a significant competitive advantage among the top three carriers.

In its reporting the gaining U.S. maritime approval, the Wall Street Journal quotes the chairmen of the Asian Shippers Forum as indicating that: “The P3 is very close to being a monopoly” and that: “Such a concentration is untenable.” The publication further quotes the CEO of SeaIntel Maritime Analysis as indicating that this alliance could be a game changer in the shipping industry, and be the forerunner of a wave of industry consolidation.

Prediction 8 of our 2014 Predictions for Global Supply Chains, called for turmoil in ocean transport to intensify well into next year as the fallout of approval of the P3 Network, or other proposed alliances play out. It appears that after reaching the critical U.S. approval, the broader industry is now fearing the realities of the implications of a significant competitive advantage.