With the October 2020 global PMI indices now reported, global manufacturing and supply chain activity levels continue to reflect a “V” shaped response from the beginning of the COVID-19 coronavirus outbreak.

From our Ferrari Consulting and Research Group lens, this trending is a reflection that many global based supply chain management teams continue to make significant and measurable efforts to address areas of product demand or supply disruption.

There are now clear signs of a flood of goods entering regional based markets for either satisfying expected demand for Q4 holiday goods or for needed medical, PPE or other product requirements related to second wave outbreaks of COVID-19. Indeed, with the Northern Hemisphere countries now in the Fall and Winter period where more populations return indoors, any second wave of virus disruption and/or added economic fallout will be a significant determinant to how the year 2020 ends-up and how the year 2021 begins.

Availability of a global-wide vaccine is a further determinant, although this week there seems to be encouraging signs. 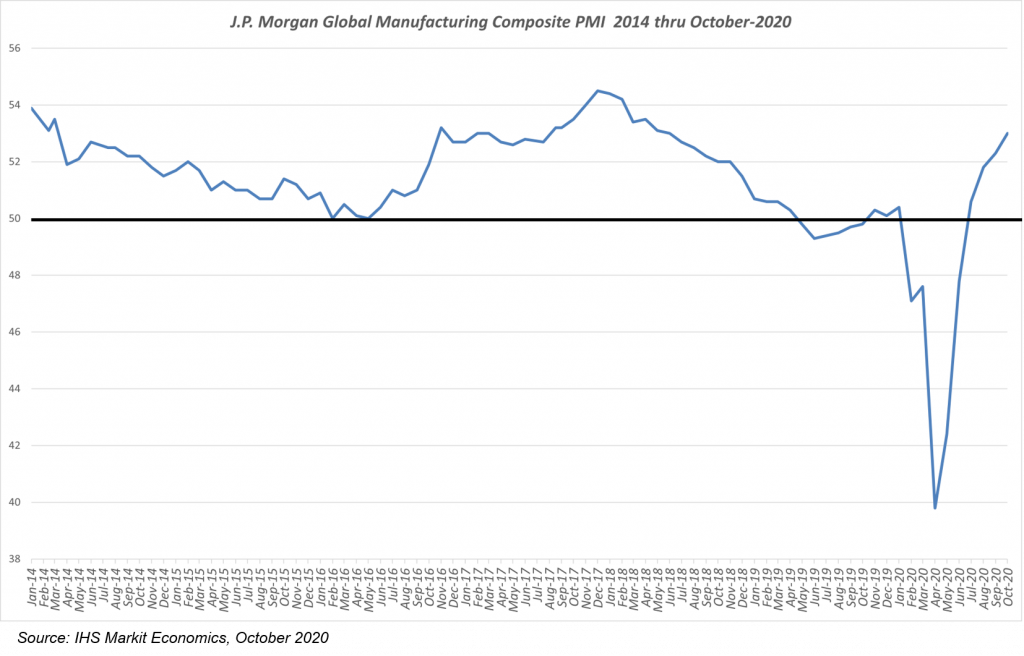 According to the authors of the J.P. Morgan Manufacturing PMI™, a reflection of a compendium of global wide indices:

“Global manufacturing output rose at the fastest pace in over two-and—a-half years in October, building on the return to growth seen during the third quarter of the year.”

The index posted a value of 53 for October, a 0.6 percentage point increase from that of September. The report authors pointed o solid growth across all three sectors: consumer, intermediate and investment goods and observed that the ongoing acceleration is being fueled by intermediate goods, where growth improved to a 33-month high. That is a sign of continued global supply chain momentum, absent any significant coronavirus disruptions occurring through the end of this year.

As can be observed in the graphic, global volumes are now higher than the end of 2019.

A separate IHS Markit U.S. Manufacturing Index® was reported as 53.4 in October, a 0.2 percentage point increase from September’s value.  The rate of output growth was reported as the sharpest since November 2019. The authors of this report indicated that input prices rose at the fastest rate since the start of 2019 and were fueled by supplier shortages, but average charges increased only modestly.

The IHS Markit Eurozone Manufacturing PMI® reinforced continued momentum from that of September. The October value rose to a 27-month high of 54.8, reflecting a 1.1 percentage point increase from that of September. Similar to the United States, growth was reported across all three market sectors with the fastest expansion being in investment goods where growth was noted as being the highest in over two years. The countries reported as reflecting the highest growth were Germany– a 31-month high, Austria- a 23-month high, Italy– a 31-month high, Spain and France.

The IHS Markit/CPIS UK Manufacturing PMI® for October reflected an ebb in momentum  with the October value falling to 53.7 from the 54.1 reported for September.  The authors pointed strengthened new export business relative to increased demand from China and the United States, and a temporary boost from Brexit related stock building among customers in Europe.

The headline for the Nikkei Taiwan Manufacturing PMI® was reported as output expanding at the quickest pace since December 2016. The reported October value  of 55.1 was little changed from the value of 55.2 for September. The October report noted that operating margins remained under pressure as costs rose sharply. Total new orders reportedly expanded for the fourth month running. Commenting on the October Taiwan report, the Associate Director at IHS Markit indicated while the sector is on course for robust growth for the final quarter, there remained downside risks to the outlook stemming from rising COVID-19 cases across a number of countries driving Taiwan’s export growth.

Of the four Developed Regions that we tend to monitor (Eurozone, Japan, Taiwan, United States) the average October PMI value was 54.5 compared to the overall Q3 value of 50.8, indeed a sign that this grouping remains in momentum.

In October, the standout for this grouping has shifted to India.  The Nikkei India Manufacturing PMI® October value of 58.9, noted as the strongest improvement in over a decade. It is further the highest of all developing regions we monitor. The October value is now 12.9 percentage points higher than the value of July when the country was forced to go on lockdown because of virus spread.  The authors noted that panel members indicated that the ongoing relaxation of COVID-19 restrictions, improved market conditions and improved demand helped to fuel October’s growth. Quantities of purchases reportedly rose at the quickest pace in just under nine years.  Once again, as we publish this commentary, virus levels have once again risen to an accelerated rate across India. Yet, according to IHS Markit economist commenting on the October report, India’s manufacturing companies are convinced that the sales resurgence will be sustained in the coming months as evidenced by a strong upturn in input buying activity.

From being the original epicenter of the virus breakout in late December and early January there has been a consistent upswing in China‘s production and supply chain activity. More and more, global economists and business media are recognizing this country’s ability to bounce back from the pandemic initial effects. China’s official government derived PMI was reported as 51.4 for October, while the closely followed Caixin China General Manufacturing PMI® which is more of a reflection of private industry reported a value of 53.6 for October. The latest Caixin report pointed to continued improvement in business conditions including a sharper increase in total new work for the month of October. The authors did note that companies are maintaining a cautious approach to manufacturing staffing levels because of increased cost pressures. The business outlook among Chinese manufacturers was reported as improving to its highest rate since August 2014 with panel members generally expecting to pandemic impact to subside and global economic conditions to improve in 2021.

Vietnam’s PMI activity continues to reflect growth. The IHS Markit Vietnam Manufacturing PMI® was posted as 51.8 in October slightly lower that the 52.2 reported September. The report authors indicated in the latest report that there were solid increases in new orders and production while control over COVID-19 remains under control. Manufacturing employment was noted as returning to growth after an eight-month period of job cuts. Business confidence reportedly has now improved in two successive months.

A concerning area remained that of Mexico, as the country has had a rather difficult time in dealing with the ongoing virus-related disruptions. The IHS Markit Mexico Manufacturing PMI® reportedly improved to a value of 43.6 in October, a 0.5 percentage point increase than that of September. This index’s value was reported as 40.4 in July. Restrictions continue across the country and the latest report pointed to a sharp deterioration in business conditions, worse than seen before the virus outbreak. The report indicates that Mexican manufacturers have turned pessimistic toward growth prospects with the PMI value not reported at over the 50-mark for over a year.

Of this grouping of Emerging nations (China, India, Indonesia, Mexico, Vietnam) the average PMI values for October were 51.1, higher than the 48.5  average of the Developed nations group. This is a reflection that with the exception of now India and China, emerging nations are still being impacted in some way by the ongoing COVID-19 disruption. In proper context, the average of this category was 39.6 in Q2.

As noted in our ongoing highlights of reported global supply chain activity, their will likely be viewpoints or estimates as to whether since the low point of April of this year, whether a sustained “V” recovery tract will maintain itself thru the end of this year.  As noted in our opening comments, the test will be what occurs in Q4 and especially whether infection rates related to the pandemic can be better controlled.

In our commentary reflecting on Q3 PMI data, we opined that momentum seemed to be driven from renewed demand for consumer-focused goods within specific regions. The October data points to added momentum now being reflected in intermediate and some investment goods, with consumer goods activity waning.

The first is that collective efforts in responding to this unprecedented disruption are showing results. Give yourselves a continued tip-of-the-hat for your efforts and dedication. However, infection rates are again rising and Q4 will present a significant amount of logistical and order fulfillment challenges. Inventory management is key.

The second remains caution and staying strong to the inevitable trials that remain. Until various vaccine development efforts are deemed successful and global populations are administered the vaccine, uncertainty has to be the approach.

In that context, the single, most significant new product global effort will be how vaccine production and distribution organization’s successfully accomplish vaccine delivery in the months to come. That will be remain the ultimate and sole determinant of sustained global supply chain activity response.