In our summary and perspectives reflecting on all of Q3 monthly reporting, we echoed an increased trending toward declining global supply chain production momentum. Now, October reporting data reinforces global-wide contraction levels in production and new orders, along with manufacturing recession conditions now acknowledged for Europe.

The October 2022 J.P. Morgan Global Manufacturing PMI® report, a composite index produced by J.P. Morgan and S&P Global was headlined with global manufacturing production now at contraction levels, and new orders contracting at the fastest pace in 28 months. Once more, the Covid recovery increases that began in March/April of 2020 are now no longer.(Figure below)

The October reported value of 49.4 slipped 0.4 percentage points from the 49.8 reported for October, and reportedly represented the third consecutive month of contracting activity. Of further concern to economists and global supply chain management teams was indicators that the October downturn was concentrated in the intermediate goods sector, which is essentially multi- industry supply network activity, the pipeline feeding production of goods.

“With business optimism and the orders-to-inventory ratio also both dipping to their lowest levels in two-and-a-half years, the outlook for production remains downbeat.”

From our Ferrari Research Group lens, the above statement provides sobering evidence that global wide demand for physical products has indeed contracted, and the outlook for any uptick is not evident. 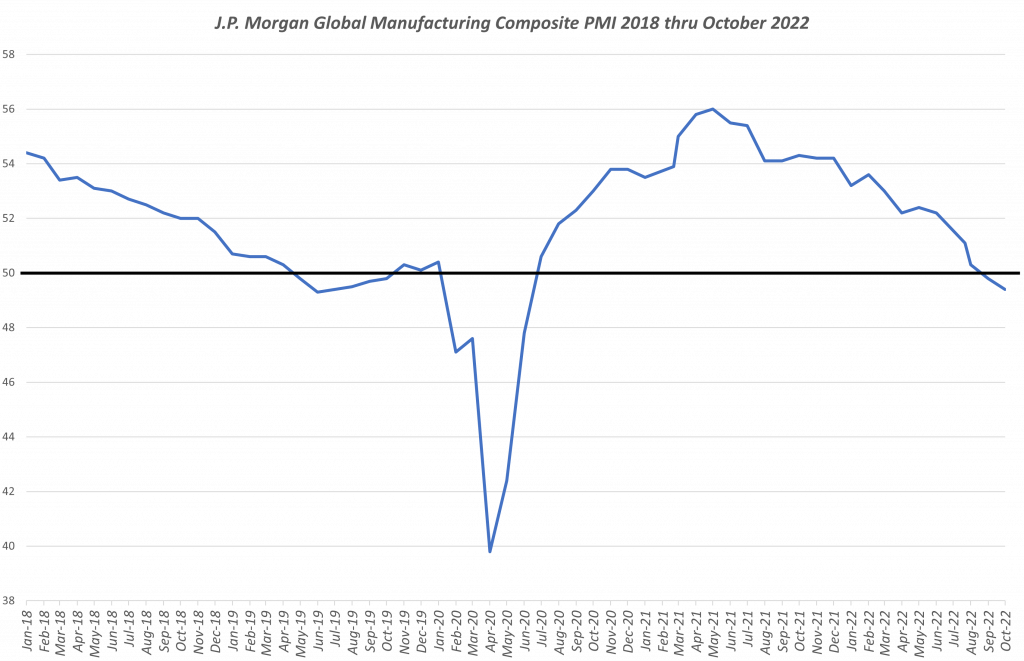 The October S&P Global Eurozone Manufacturing PMI® slipped further into contraction at a reported value of 46.4, slipping 2 percentage points from the September value, and further slipping a cumulative 3.2 percentage points in the past three months. Noted in the October report was that the sub-indexes of output and new orders fell at rates, “rarely surpassed across 25 years of PMI data collection.” At the country level, Spain, Germany and Italy reported 29-month lows in PMI activity. Commenting on the October data, Joe Hayes, Senior Economist at S&P Global Market Intelligence stated in-part, that:

“The eurozone goods-producing sector moved into a deeper decline at the start of the fourth quarter. The PMI surveys are now clearly signaling that the manufacturing economy is in recession.”

Similarly. the S&P Global / CIPS UK Manufacturing PMI® fell to a reported 29-month low of  46.2 in October, declining from 48.4 in September, and 47.3 reported for August. New order inflows reportedly contracted at the fastest pace since May 2020. Reportedly, consumer, intermediate and investment goods sectors all experienced output declines. Further indicated was that business optimism dipped to a two-and-one-half year low amid weak product demand, recession fears and rising uncertainty levels.

As our readers are likely aware at this point, a new Prime Minister has been appointed to lead the government of the United Kingdom, after former Prime Minister Lizz Truss was forced to resign after serving a mere 50 days in office, amid controversial and noted de-stabilizing economic and taxation policies.

The October S&P Global US Manufacturing PMI™ posted of 50.4 for October, reflecting a 1.6 percentage point decline from this index’s September value. The headline for this October report was manufacturing output continuing, but with weak demand conditions. Reportedly, panelists pointed to greater customer hesitancy amid high inflation, and that the decrease in new orders being solid overall and the quickest in two-and-one-half years.

The separate Manufacturing ISM© Report on Business reported an October value of 50.2, representing the lowest value of this index since May 2020, and a 0.7 percentage point drop from the reported September value. The report commentary pointed to panelists indicating softening new order rates over the past five months and indications that, “companies’ are preparing for potential future lower demand.” Noticeably, the Backlog of Orders sub-index declined 5.6 percentage points for October while the Inventories Index declined three percentage points.

The October S&P Global Taiwan Manufacturing PMI® plummeted to its lowest level since 2009. According to the report narrative, production and new orders fell at even more accelerated rates with manufacturers commenting on subdued domestic and international demand levels. The reported October value of 41.5 was 0.7 percentage points below that of September and represented the fifth monthly deterioration in Taiwan business conditions. Panelist sentiment was noted as remaining pessimistic for future production output and that manufacturers trimmed their production levels for the seventh month in a row.

We would add that during this same period, Taiwan manufacturers would have been ramping up output levels to support this quarters holiday demand needs for consumer electronics and smartphones.

The official manufacturing PMI compiled by the country’s Bureau of Statistics reported a contracted PMI value of 49.2 for October compared to 50.1 reported for September. Reportedly, sub-indexes related to production, new orders, supplier delivery times and manufacturing employment declined in October.

The Caixin China General Manufacturing PMI®, which is generally weighted toward smaller private manufacturers, remained at contraction value of 49.2, but above the 48.1 value reported for September. Report authors noted further declines in output and new orders amid lower customer demand and disrupted factory operations. Similar to other regional reporting, intermediate goods producers reportedly registered reductions. Backlogs of work reportedly fell for the fourth time in five months. Further indicated was that manufacturing employment levels have fallen for seven consecutive months.

Separately, The Wall Street Journal reported that China’s economy grew 3.9 percent during Q3, more strongly than expected. This was reportedly a marked improvement from the 0.4 percent year-over-year growth reported for Q2 but remained below the 4.8 percent growth level reported for Q1.  Overall year-to-date growth in 2022 of 3 percent is reportedly well below the established government target of 5.5 percent for 2022.

The S&P Global India Manufacturing PMI® posted a value of 55.3 for October, increasing 0.2 percentage points from the 55.1 value reported for September. Report commentary indicated that manufacturing growth remains strong and inflationary pressures remained mild. Reportedly, firms were able to land additional work and reflecting a 16-month sequence of order growth. Of particular interest, new export orders have reportedly risen markedly, with the pace of expansion being higher. The overall rate of cost inflation was reported as the second weakest in two years.

As noted in our highlights of September PMI reporting, one of the most significant headlines related to this region was the announcement from Apple that the new model iPhone14 is being simultaneously produced both in China and India. That is a reflection that this is one of two regions being viewed as an option for China Plus supply network resiliency strategies.

The S&P Global Vietnam Manufacturing PMI® declined to 50.6 for October, compared to 52.5 reported for September. The October report pointed  to signs of a slowdown amid weaker new order growth. Noted were rises in demand across consumer, intermediate and investment goods sectors. The report commentary equated October’s performance to the first signs that, “weakness in the global economy is starting to impact growth at Vietnamese manufacturers with both new orders and exports increasing at the weakest rates in 13 months.”

Both October and September PMI indices data now reinforce the clearest evidence that global supply chain activity levels are now reaching or trending toward contraction levels. With the Eurozone now declared to be experiencing manufacturing recession, and with global wide manufacturing PMI now reported as two consecutive months of contraction, the prospects for 2023 remain concerning and meaningful for global chain activity volumes.

Within a period of roughly six weeks, global wide governments continue with ratcheted up interest rates to stem high and intolerable levels of inflation. The inflation rate in Europe now exceeds 10 percent and the ongoing Russia and Ukraine conflict points to surging energy prices and likely anticipated energy supply shortages across Europe during 2023, especially the winter months. The ocean container industry has now acknowledged not only the end of the global trade boom, but dramatically reduced fleet capacity needs for 2023.

We once again reiterate that added scrutiny is especially important in planning and assessing product demand and supply needs as is a good amount of scenario-based business analysis. The year 2023 is indeed going to be another especially challenging year for industry supply chain teams.