Starting in late 2011 and early 2012, we began alerting our Supply Chain Matters readers to the building signs of potential consolidation and restructuring for the ocean container shipping industry. That was the time when the major container shipping lines began the pooling of capacity under various formed shipping alliances. Since that time, we believed it was important to provide continual updates, both on this platform, our annual predictions and other research. 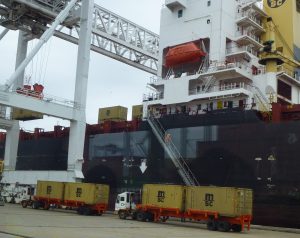 Our update in April of this year re-iterated business media reports that the industry had, in-essence, three options: either shrink, merge or continue to ride out the worst downturns in decades.

Industry media also began to question whether shipping lines have chosen to ignore the implications of introducing larger mega-ship sized container vessels within an industry wide environment that was demonstrating anywhere from 10 percent, to as much as 30 percent excess capacity. Current freight rates for the industry are barely compensating for the cost of fuel let alone overall operating costs. The financial pressures continue to mount and the smaller carriers continue to operate under enormous financial stress.

Of late, shippers have been benefitting from the fallout of severely depressed freight rates but paying the price in slower transit times and unreliable scheduling of vessels.  Some questioned whether shippers have been lulled into a perspective of sticking one’s head in the sand and assuming that excess capacity and depressed freight rates would eventually work itself out.

The current wake-up call has been the ongoing financial crisis that has been impacting Hanjin Shipping, as thousands of in-transit ocean containers were stranded by the declaration of bankruptcy protection of the south Korean based carrier. The latest development for Hanjin came earlier this week when a South Korean bankruptcy court ordered the shipping line to return its chartered ships back to their respective owners and to sell off as many of its owned vessels as possible. Neither the carrier’s banks, owners, or South Korean government are indicating any intent to bailout this shipping line to its original presence. Business media reports indicate that this is the strongest signal yet that the heavily debt loaded Korean carrier will either be liquidated or transformed into a much smaller, regionally based shipping carrier. We view the Hanjin developments as a definitive sign that the ocean container shipping industry can no longer continue to ride out the current industry dilemma.

The newest significant development will be this week’s announcement by Danish shipping giant A.P. Moller-Maersk indicating that it would split its current business operations into two separate operating businesses. Maersk Line, the world’s most dominant ocean container carrier will be the center point for a new container transport and logistics division that will consist of other owned businesses such as APM Terminals, Damco and Maersk Container Industry businesses. According to a report from The Wall Street Journal (Paid subscription required): “The split is intended to give Maersk Line more flexibility to grow through acquisitions in what is expected to be an acceleration of industry consolidation in coming months.” Further reported is a view by shipping executives that three existing Japan based carriers, along with Hong Kong based OOCL and Taiwan based Yang Ming Marine will likely be the target of bigger industry players.

Thus, the next phase for further merger and consolidations is about to commence, and shippers need to stay informed and be ready with what-if contingency planning.

At best, 2017 could be viewed as a year of continued industry consolidation. Ocean container freight rates are expected to continue at depressed and unsustainable levels with carriers idling additional vessels to protect margins and financial performance.

We advise global shippers and transportation services procurement teams to continue to plan for slower transit times and supplemental needs for adequate safety stocks.  It would be wise to have some contingency plans in place to avoid being disrupted by another Hanjin type of development.

Beyond 2017 is anybody’s guess as the larger industry players absorb certain other existing players. The open question, by our lens, is whether global maritime regulators step-in to protect shipper and industry interests.