With the bulk of November 2020 global PMI indices now reported, global manufacturing and supply chain activity levels continue to reflect a “V” shaped response from the early periods of the COVID-19 coronavirus outbreak.

According to the banner headline of the J.P. Morgan Manufacturing PMI™, a reflection of a compendium of global wide indices:

The index posted a 33-month high value of 53.7 for November, a 0.7 percentage point increase from that of October. The report authors indicated that output growth was one of the best over the past decade.  Once again, solid growth was recorded across all three sectors: consumer, intermediate and investment goods, with the steepest increase coming from investment goods. October’s report pointed to acceleration being fueled by intermediate goods. Both are continued signs of global supply chain momentum, absent any significant coronavirus disruptions occurring over the coming months.

According to the November report: “Of the 33 territories for which data was available, 19 registered expansions and 11 contractions.” 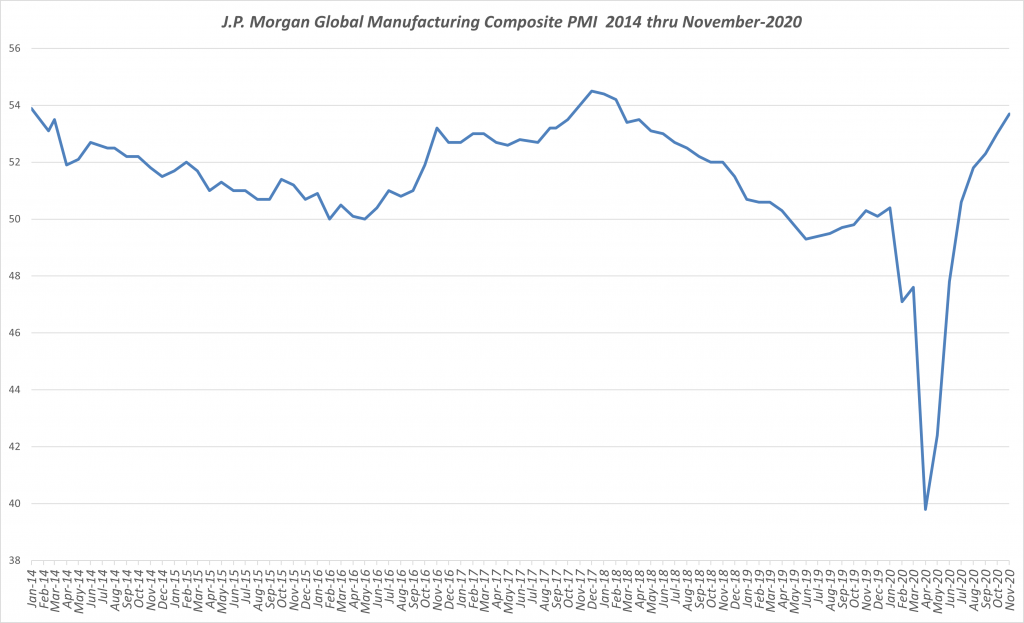 As can be observed in the above graphic, global volumes are now reaching a five-year peak achieved at the beginning of 2018, and the “V” shaped response remains stark.

A separate IHS Markit U.S. Manufacturing Index® was reported as 56.7 in November, a 3.3 percentage point increase from October’s value.  The report headline banner noted: “Steepest improvement in operating conditions since September 2014.” Similar to the ISM report, Report authors noted that pressures on available capacity were “exacerbated by near-survey record supply chain delays and input shortages.” Further noted was demand for investment goods such as business equipment and machinery rose sharply during November.

A further standout area in this Developed Regions grouping remained Taiwan with the headline for the Nikkei Taiwan Manufacturing PMI® indicating output increases at the quickest rate since July 2014.  The reported November value  of 56.9 was a 1.8 percentage point increase over October’s 55.1 value. Total new orders reportedly expanded at the steepest pace since early 2011. Commenting on the November report, the Associate Director at IHS Markit indicated that with the improvement in demand among Taiwanese manufacturers being so broad-based, there is so welcome news that global economic activity is showing signs of reviving.

The IHS Markit Eurozone Manufacturing PMI® while headlining that manufacturing growth remained strong, momentum did slow. The November value of 53.8 reflected a one percentage point decline from October.  While growth continued capital and intermediate goods, the report noted a modest deterioration among consumer goods producers for the first time in six months. The countries reported as reflecting the highest PMI were Germany– a 2-month low, Netherlands– a 22 month high, Ireland– a 3 month high, Austria- a 3-month low, Italy– a 5-month low.

The IHS Markit/CPIS UK Manufacturing PMI® reflected a 35-month high value of 55.6 in November after an ebb in momentum reported in October.  The authors pointed to strengthened new export business, rising levels of input purchasing and raw material stockpiling related to end-of-year Brexit stockpiling among customers across Europe.

In November, the standout region for this grouping now points to China.  From being the original epicenter of the virus breakout in late December and early January there remains a consistent upswing recovery in production and supply chain activity. The closely followed Caixin China General Manufacturing PMI® which is more of a reflection of private industry reported a value of 54.9 for November compared to 53.6 for October. The report pointed to the strongest improvement in operating conditions in a decade as output and new orders accelerated to 10-year highs. Further reported was that firms raised their purchasing activity at the steepest rate since January 2011. However, from a cautionary perspective, the authors indicated that both input costs and output charges are rising at sharper rates. Business confidence regarding the 12-month outlook was noted by the authors as strongly positive.

China’s official government derived PMI was reported as 52.1 in November, a three-year-high, compared with 51.4 for October.

The IHS Markit India Manufacturing PMI® November value of 56.3 declined 2.6 percentage points from the 58.9 reported for October. The authors headlined the report indicating that the manufacturing sector remained strong despite losing traction. Growth reportedly came from consumer goods sectors while new export orders increased markedly in November among key export markets. India based manufacturers noted that the pandemic was the key factor weighing on growth.

Vietnam’s PMI activity suddenly dipped to contraction in November attributed to storms and flooding. The IHS Markit Vietnam Manufacturing PMI® was posted as 49.9 in November compared to the 51.8 in October. The  COVID-19 pandemic was cited as a further factor weighing on output. Purchasing activity reportedly decreased for the first time in three months.

A concerning area remains that of Mexico, as the country remains challenged in dealing with the ongoing virus-related disruptions. The IHS Markit Mexico Manufacturing PMI® value of 43.7 in November was little changed from the 43.6 value in October.

From our Ferrari Consulting and Research Group lens, there is increased evidence of more resilient momentum heading into December and the first half of the year 2021 as global based supply chain management teams continue to make significant and measurable efforts to address areas of product demand or supply disruption.

Mitigation of now active coronavirus infection rates with the cascading effects to supply networks remain a concern. Availability of a global-wide vaccine is a further determinant with continued encouraging signs that vaccine distribution can be prevalent during the upcoming year.

As supply chain management teams navigate the final month of the all-important holiday fulfillment period, the next determinant will be if these levels of global supply can be consumed by global product demand. In other words, how accurate was product supply and demand matching.

Again, we re-emphasize that the single, most significant global effort will be how vaccine production and distribution organization’s successfully accomplish vaccine delivery in the months to come. That will be remain the ultimate and sole determinant of sustained global supply chain activity response.