As observed in our published commentary on October 2022 published PMI indices, global-wide contraction levels in production and new order intake remain at contraction and perhaps manufacturing recession levels for certain regions. There are additional signs of a global glut in overall inventory levels, yet selective component shortages remain for certain industries.

The J.P. Morgan Global Manufacturing PMI® report for November 2022, a composite index produced by J.P. Morgan and S&P Global was headlined as an ongoing intensification of manufacturing contraction with new orders and output contracting for the fourth consecutive month. 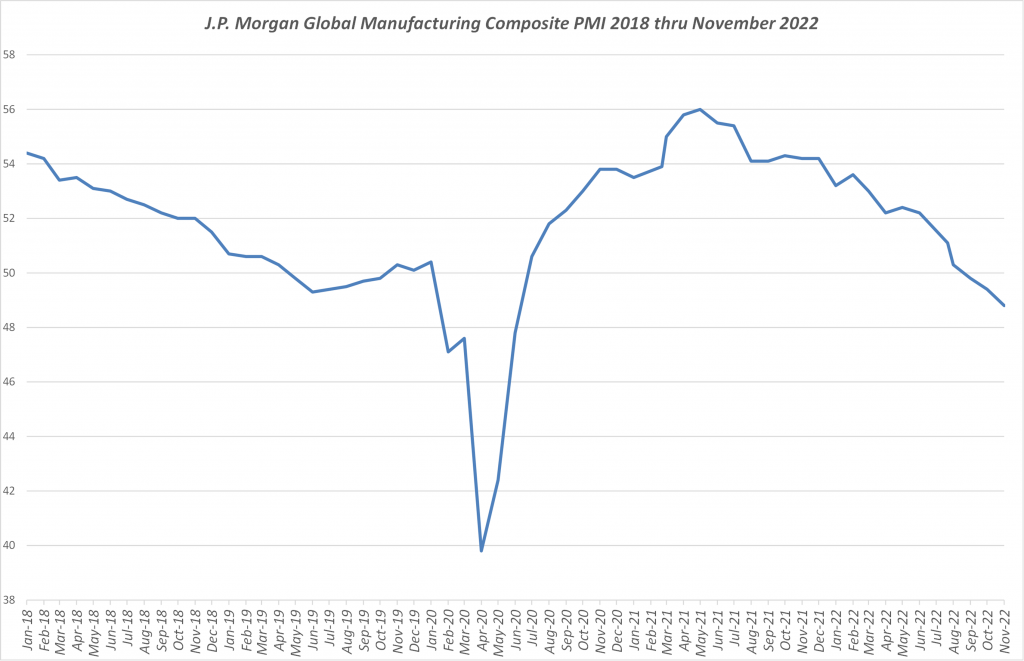 The November report reflected a 29-month low value of 48.8, slipping 0.6 percentage points from the 49.4 reported for October. As reported for prior monthly data, contraction was concentrated in the consumer, intermediate and investment goods sectors.  Of increased concern was indications that rates of decline accelerated in China, while output levels in the United States contracted after 29 months of consecutive growth. Factory activity among the Eurozone sector eased in November.

Global business optimism was reported as being at one of its lowest level  since the Covid-19 pandemic began in early 2020.

On a slightly positive note, rates of inflation were noted as easing to 24-month lows.

“The November PMI’s point to an intensification of the global manufacturing downturn, as the output index fell to a new low since June 2020. The decline in output was accompanied by a tick down in new orders as rising inventories have put the brakes on production.”

The November S&P Global Eurozone Manufacturing PMI® eased to a value of 47.1 as compared to a reported value of 46.4 for October. Noted in the November report was that the rates of decline in output and new orders were: “..less aggressive when compared to the near two-and-one-half year records seen in October.” Manufacturing output numbers reportedly fell for a sixth straight month.

At the country level, Italy, Greece and France bounced back to 4-month, 2 month, and 3-month highs but remained in production contraction levels. The reported PMI of Spain reached a two-month high of 45.7.

“The PMI signals some welcome moderation in the intensity of the eurozone manufacturing downturn in November, which will support hopes that the region many are not facing a winter downturn as severe as previously anticipated by many. However, the survey’s production index continuing to run at one of the lowest levels recorded over the past decade. At these levels the survey is indicative of a marked annualized rate of contraction of approximately 4 percent. While official manufacturing data have been more buoyant – and more volatile – in recent months, such weak PMI readings have always been followed by commensurate steep declines in the official statistics.”

The S&P Global US Manufacturing PMI™ posted a value of 47.7 for November compared to a 50.4 reading in October. The headline for the November report was the first deterioration in U.S. manufacturing performance since June 2020. Noted was that decreases in output were solid overall, and the most rapid in two-and-one-half years.  New orders reportedly declined at the sharpest rate since May 2020.

Manufacturing conditions continued to deteriorate within Taiwan which reportedly experienced a further and described sharper decline in operating conditions. The S&P Global Taiwan Manufacturing PMI® for November reportedly rose fractionally to a value of 41.6, after plummeted to its lowest level since 2009 in October. Panelists reportedly cited weak product demand with new export orders falling sharply during the month.

The official manufacturing PMI compiled by the country’s Bureau of Statistics again reported a contracted PMI value of 48 for November, compared with 49.2 for October, and 50.1 reported for September. Sub-indexes related to production output, employment and supplier delivery times reportedly each contracted at a faster pace in November.

The Caixin China General Manufacturing PMI®, which is generally weighted toward smaller private manufacturers, ticked up marginally to a value of 49.4 for November, compared with a 49.2 value reported for October. Report authors again noted that the ongoing rate of Covid infections, a consequent zero tolerance policy on the part of local government officials, and subsequent challenges related to production and transportation activities all contributed to declines in output.  Further indicated was survey data indicating a decline in purchasing activities as manufacturers experienced lower production requirements.

Regarding ongoing production disruptions related to Covid outbreaks, Supply Chain Matters has highlighted ongoing developments related to contract services manufacturer Foxconn’s largest production facility producing Apple iPhones has being impacted by a localized outbreak and ongoing worker walk outs. The latest reporting from Bloomberg indicated that a shortfall of upwards of six million units of Apple’s recently announced iPhone 14 model could be impacted for ongoing holiday demand. Similarly, auto makers across China have had to once again temporarily suspend production because of either parts shortages or local population or worker lockdown measures.

Global and local economists are increasingly indicating that the ongoing pandemic restrictions could jeopardize the country’s overall growth rate this year. Overall year-to-date growth of 3 percent is reportedly well below the established government target of 5.5 percent for all of 2022.

A global hotspot of manufacturing and supply chain activity remains that of India, with this region benefiting from a seventeen consecutive month of expansion.

The S&P Global India Manufacturing PMI® posted a value of 55.7 for November compared with 55.3 reported for October. Report commentary once again indicated that manufacturing growth remains strong and inflationary pressures remained mild. Reportedly, a stronger upturn in order rates drove the November index higher. Once again, new export orders have reportedly risen markedly, with the pace of expansion being higher. November report commentary further indicated that the level of positive sentiment among this country’s manufacturing sector was the best in upwards of eight years.

The combination of September, October, and now November PMI trending continue to reinforce that global supply chain activity levels are now clearly at contraction levels.  The prospects for 2023 remain concerning both from indications of an economic downturn and for global supply chain leading sub-index indicators. The IMF warned in October that “the worst is yet to come” with and added statement that “global trade will decline sharply,” and a revised forecast of 3.2 percent overall GDP growth this year, followed by 2.7 percent expected growth in 2023.

However, there are some signs of optimism related to a peak in global inflation levels being reached and perhaps the Eurozone being able to manage energy needs thru the upcoming winter months.

We once again reiterate that added scrutiny is especially important in planning and assessing product demand and supply network needs as is a good amount of scenario-based business and supply chain analysis.

The signs clearly indicate obvious supply chain business planning and execution challenges for 2023, along with selective component and reduced production capacity and supplier focused challenges in the months to come.

In the nuance of air travel- Buckle those seat belts and be prepared for added turbulence.