The latest  U.S. government investigative report on the series of contaminated romaine lettuce incidents during 2018  has prompted Supply Chain Matters Editor Bob Ferrari to comment on where technology can play an important role. The answer is not Blockchain alone but in a full understanding of the problem to be solved and the benefits for all stakeholders. 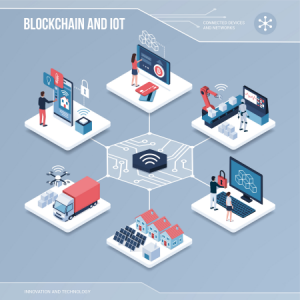 This month, the U.S. Food and Drug Administration (FDA), in conjunction with the U.S. Centers for Disease Control (CDC), U.S. state partners, and Canadian health officials produced an investigation findings report focused on the Fall 2018 multi-state breakout of E.Coli 0157:H7.

This Editor took the time to read the entire report. I did so for three reasons.

First, I have always been an avid home gardener and I have passion in farm to fork food safety needs. I do so because I am increasingly concerned about industry’s overall approaches to food safety across today’s supply chains. Thus I need to alert readers in-advance that this will be a lengthy Supply Chain Matters commentary.

Second, as a supply chain management technology industry analyst, I really wanted to better understand whether the application of technologies such as Blockchain, can really make a difference in improving food safety. Third, this will the basis of an upcoming broader technology advisory report.

The U.S. government report tracks a complete timeline of the romaine lettuce contamination incident, and indeed makes direct linkage to the early 2018 incident, and to former incidents. Here are highlights:

The joint government investigation spanned the timeframe from November 1, 2018 thru January 9, 2019, a period of about 9 weeks. Considering the description of the situation, the state of the evidence and the overall scope, it was amazing what was able to be uncovered in that period of time. The use of advanced technology was very apparent.

Investigators had to determine what specific food might have caused the outbreak and that required a joint-agency all-out effort. It was determined after rigorous interviews that the vast majority of affected consumers interviewed reporting eating romaine lettuce the week before illness onset. Based on the imminent threat, FDA issued its public health advisory on November 20, 2018, three weeks into the investigation. An important statement to focus on was: “Because the exact growing locations and dates of harvest were uncertain in available traceback records, and the outbreak appeared to be ongoing, FDA recommended that consumers not eat any romaine lettuce until further notice.”

As a reference, the Food Safety Modernization Act (FSMA) played an important factor in granting the FDA the discretion to suspend sales of any product deemed to an imminent threat to public health. While many nationwide romaine lettuce growers were obviously impacted by the order, it was a necessary action until a definitive source or sources of the contamination could be determined.

One could further speculate that with the history of multiple past incidents involving romaine lettuce as a source of infection, federal authorities absolutely needed to take such action to protect the public. The report cites that isolating the E.coli strain from ill consumers through use of genome sequencing determined that the bacteria strain in the latest incident was previously seen in ill consumers in the Fall of 2016 and the Fall of 2017. Hence, a repetitive occurrence.

From the all sales suspension point, tracebacks from points of service identified 14 distributors, 17 farms and 15 ranches  in multiple California counties as potentially supplying the contaminated lettuce. It wasn’t until multiple subsequent feet on the ground inspections and investigations were completed that a specific California growing region was identified. It took until December 13th for investigators to narrow the search to three California counties.

Applying cross-triangulation information from the 2017 outbreak, investigators honed-in on an on-farm water reservoir in Santa Barbara County, which tested positive for the outbreak strain. The particular farm was linked to a 2017 outbreak of the same strain of bacteria.

Added investigation led to a conclusion that the romaine lettuce that made people sick was likely harvested between late September and mid November 2018, thus consumer exposure to this potentially harmful lettuce spanned upwards of 6 weeks, conservatively.

The FDA concluded that the contaminated lettuce may have been grown on multiple farms beyond that of the farm serviced by the contaminated reservoir. Here is an important sentence for our community to dwell upon:

“An alternative explanation for the lack of traceback convergence to a single farm may be due to ill consumers having multiple romaine lettuce exposures and limited recollection of exposures and brands that ate.”

Hold that statement in your mind.

The FDA report provides a number of recommendations for prevention of contamination:

It validated that this was the second multi-state outbreak associated with romaine lettuce in the U.S. in a single year with ramifications for the produce industry. The Fall 2018 incident was directly attributed to use of contaminated water of a Santa Barbara county farm. This report made a direct link to the investigative report of the Spring of 2018 in terms of the responsibilities of state agencies and the produce industry as a whole regarding safe practices. An overall recommendation points to the following:

“Outbreaks involving leafy greens are challenging to investigate because of the short shelf-life of the product leading to lack of available identifying packaging at the time of the investigation, the wide distribution and consumption of leafy greens, the complex supply chain between the farm and the end user and traceability records and product labeling that often lack key data elements (e.g. where leafy greens are specifically grown). These factors further demonstrate the importance of implementation of applicable provisions of the FSMA Produce Safety Rule and Good Agricultural Practices (GAPs) on all produce farms.”

“FDA strongly encourages the entire leafy greens supply chain to adopt traceability best practices and state-of-the-art technology to assure quick, accurate and easy access to key data elements from farm to fork when leafy greens are involved in a potential recall or outbreak. Fresh produce, including leafy greens, are a highly perishable commodity, and traceability information should facilitate the rapid tracking of implicated product throughout the entire supply chain to expedite its removal from commerce, prevent additional consumer exposures, and properly focus any recall actions. A key element that would assist tracing efforts during an outbreak is the ability to identify specific farms or ranches and dates of harvest for product that contribute to production lots if product has been commingled. While it is important to understand where the product was grown and not simply the location of the business entity that shipped or processed it, it is equally important to be able to determine which farm(s) and growing region(s) are responsible for supplying the contaminated product, and the time frame when product was supplied.”

If any of our readers have conducted food shopping in physical stores of-late, you may have noticed that heads of romaine lettuce, regardless of growing region remain unsold on store shelves, while other lettuce varieties are being sold. Consumers remain concerned and likely need additional safeguards concerning specific food safety related to romaine and other lettuce varieties.

Some readers may immediately jump to Blockchain as the most obvious technology that can address such food safety concerns related to leafy greens. Such a response likely stems from awareness to food retailer Walmart’s existing mandate to have all of its lettuce suppliers to be compliant with a blockchain enabled process by the Fall of 2019.  Mandates from Walmart are common occurrence- who can forget those RFID implementation mandates directed at item-level traceability several years ago. From our lens, that initiative was not successful because of a:

After reviewing the romaine lettuce investigatory findings, and thinking about the problem statement, my belief is that blockchain is not the sole answer. It may well be a combination of technologies, either well known or emerging.

First is monitoring of good farming practices among all fields and means to more readily identify when practices stray beyond acceptable control limits. That could consist of periodic and timely soil and water testing electronically communicated to local inspectors.

It likely includes visible item-level identity for each head of lettuce that consumers can read and recall.  Reflect on the FDA statements on trackback convergence, that consumers have limited recall of food that they consumed. How many times have readers purchased a head of lettuce with absolutely no item level packaging? Probably many, many times, because most lettuce is shipped in bulk in coated carboard cartons, and then broken down into heads on-shelf in either plastic bags or unpackaged. The visible identity to farm, growing region or harvest date may or may not be at carton level.

Once a person turns seriously ill, the first question is always, what did you consume and where did it come from? Therefore, step one is to provide consumers, along with health officials, the ability to readily identify the brand, origin and harvest date of leafy greens in a very timely and visible manner.

To be fair, since the two nationwide outbreaks and recalls, some retailers have posted signs on the shelf or bin, indicating where the romaine lettuce came from and its growing date. But that we believe, is a small percentage, and only for romaine lettuce as compared to other leafy greens.

Will blockchain be able to address this complete problem statement of detailed item-level visibility? Not totally, unless the Blockchain provides the ability to generate item-level labeling. Are there other technologies such as bar codes QR codes to address labeling identification, or Internet of Things enabled electronic readings of soil and water conditions, perhaps so?  Should combinations of technologies be evaluated and considered as to various impacts- absolutely.

A further question relates to blockchain’s ability to address obvious concerns for added implementation, ongoing support and operating costs at the farm level? That to us remains very unclear.

The reality is that for the many farms that grow and harvest leafy greens, labor costs are a crucial concern because of the relatively low margins of leafy greens. Most all of the added costs involved from harvest to retailer involve migrant labor, packaging, transportation and distribution. Any technology deployment strategy has to be sensitive to whether that technology adds to or removes such costs. The other perhaps hidden notion of cost is that individual retailers and/or growers do not want to be held liable for providing contaminated food to consumers. Lack of item-level and specific farm visibility is convenient toward shielding liability and responsibility.

This commentary is not to knock blockchain or any other promising technology. Blockchain will indeed make its impact on supply chain business process challenges. As in other advance technologies, the timing relates to common, non-proprietary technology standards, maturity of the technology, overall economics and meaningful benefits for all stakeholders, most importantly customers and their suppliers.

Rather it is yet another call to technology provider, system integrator and  broad stakeholder communities and their respective customer sponsors to fully understand the complete problem statement, and to not bias a specific technology as the answer for multiple challenges.

The overall benefits should be translated to not be for any one stakeholder but for all stakeholders.

Mandates are a result of overt buyer influence. Shared benefits are a result of insightful thinking and positive collaborations among teams on how to best solve a vexing problem with an open mind and a clear, unbiased lens.