Last week, general, business and automotive industry media echoed headlines from Amazon.com indicating intent to acquire over 100,000 electric powered delivery vans. The announcement was viewed as a response to Founder Jeff Bezos’s pledge that this retail and computing giant will be carbon neutral by 2040.

There is little secret that Amazon is under constant scrutiny not only for environmental impact, but business and labor practices as-well. So much so, that the actions from retail industry competitors is to shun anything having to do with Amazon’s tentacles and business interests.

As The Wall Street Journal reported, Amazon’s climate pledge came just one day prior to a threatened walk out of more than 1500 of the company’s worldwide employees, planning to protest the online retailer’s lack of action related to climate change.

As with all significant announcements related to Amazon, there is always a broader strategic purpose and motivation. Supply Chain Matters was more focused on the selection of a generally little- known start-up, Rivian Automotive, as the recipient of a commitment to acquire a total of 100,000 vehicles over the next ten years. 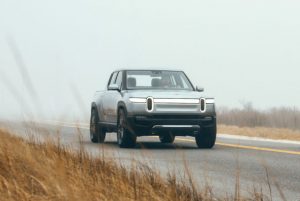 Originally founded in 2009 by an MIT engineering alum, this manufacturer’s stated Mission is in developing vehicles, products and services related to sustainable transportation.

During the company’s early years, vehicle prototypes were geared toward “ride-sharing and driverless” automotive or vehicle markets, generally focused on the principal value-chain components of such vehicles, namely the batteries and electric drive trains.

The company had been generally characterized as a niche luxury electric-vehicle producer, somewhat in same persona of a Tesla Motors.

In 2015, the company was the recipient of a significant equity investment, allowing an expansion in its research efforts not only in Michigan but Silicon Valley as well.

In September of 2016, Rivian had the opportunity to acquire the former Normal Illinois automotive assembly manufacturing facility then owned by Mitsubishi Motors.

Thus far, Rivian has announced the launch of two all-electric vehicles, one being an electric pick-up truck and the other a three-row sports-utility vehicle. Each promises to have over 400 miles of battery range and: “provide an unmatched combination of performance, off-road capability and utility”

Regarding the former, Ford Motor Company invested a reported $500 million in April of this year, as the principal sponsor of the electric pick-up vehicle, which is currently planned for market launch in late 2020.

Both vehicles are reported to feature shared battery and drive train components.

It was in February of this year that Amazon initially indicated interest in Rivian, by leading a $750 million equity investment round. As in past such investments, added details regarding Amazon’s contribution and further investors were withheld.

By June of this year, this electric vehicle manufacturer reportedly employed over 1000 people.

History as a Guideline

The obvious question is what attracted Amazon to Rivian, which up to now, has demonstrated little intent to market and produce commercial electric delivery vans.

Part of such attraction may well be the underlying technology, part may be the spirit of the management team, and part may be the similarities to Tesla in tendencies to disrupt existing industry norms such as independent dealerships, coupled with technology updates delivered by continuous online software upgrades. Having little detailed knowledge, this commentary will assume that the technology attraction was significant.

As to whether Rivian can operationally scale to deliver 100,000 delivery vans in addition to other product commitments related to high-end autonomous pick-up trucks, SUV’s or other vehicles remains to be determined.

What we find of more speculative interest is whether the election of Rivian has broader strategic connotations.

Looking back as Amazon’s previous strategic decisions in the leasing of now upwards of 100 large body air freight aircraft from aircraft lessors, the decision was preceded by an equity investment. In the case of Air Transport Services Group (ATSG), the selection came with a nearly 10 percent initial equity stake. Ten years later, and two additional aircraft fleet expansions, the equity investment in ATSG is now reported to be approaching 33 percent. A similar equity pattern was demonstrated with Atlas Air Holdings, the other provider of leased aircraft to the online provider.

In September 2018 when Amazon announced its acquisition a total of 20,000 Mercedes Sprinter parcel vans to be available to independent small business operators that would be able to form small package delivery companies, the strategy was not directly owning rolling assets, rather, ownership of these delivery vans to be assumed by independent fleet management contractors who would be provided special lease rates. Lacking specific details, we will assume that the future electric powered vans will similarly be leased by independent delivery contractors.

If Rivian were to directly compete with other parcel truck manufacturers, high-end electric vehicle producers such as a Tesla or even global automotive manufacturers such as General Motors and Volkswagen which are each plowing substantial monetary and technology development assets into various new models of autonomous and electrically  powered vehicles, Amazon would have some form of interest.

The summary takeaway for our commentary is thus for supply chain and transportation management teams to not just focus on the sustainability strategy aspects of Amazon’s announcement, but the broader strategy facets that point to either Amazon’s potential direct or indirect involvement and influence in development and manufacturing of commercial driverless and electrically powered vehicles sometime down the road.

With Amazon, it always think big and think bold.