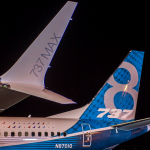 The Seattle Times reported this week that the after conducting flight tests in June, the U.S. Federal Aviation Administration (FAA) uncovered a potential flaw in the aircraft’s flight control system. That has reportedly spurred Boeing to undertake what is described as a fundamental software design change relative to the aircraft’s flight control systems.

This change involves taking input from both on-board flight-control computers at once instead of relying on one. The prior approach was one that if some serious condition occurred with a single flight control computer, then the computer output to the flight controls could be in error, even if two angle of attack sensors are working properly. Similar to such sensors, there are two flight control computers in the cockpit but only one was programmed for control during flight operations.  Flight computer inputs would be switched among the two computers on each subsequent flight.

The report notes that while that might seem simple, the software architecture relying on one computer input that has been in place on among 737 aircraft for decades. The reason for this change is that the original design assumption was that the aircraft pilots can be relied on as a backstop in unusual scenarios such as unforeseen movement of the plane’s horizontal tail stabilizer.

The FAA testing in June uncovered a new potential fault with a microprocessor in the flight control computer, and the details and implications are now coming out from informed sources.

Further noted is that Boeing believes the software changes can be accomplished in-time to meet an October goal to win aircraft re-certification.

Cited is a Boeing engineer indicating that: “..the proposed software architecture switch to a “fail-safe,” two-channel system, with each of the computers operating from an independent set of sensors, will not only address the new microprocessor issue but will also make the flawed Maneuvering Characteristics Augmentation System (MCAS) that went haywire on the two crash flights more reliable and safe.”

Citing three other sources, the report emphasizes that Boeing could have rewritten the software governing functions monitored with in flight control computer but elected toward the broader approach, one that would both fix the microprocessor issue and MCAS more reliable.

In reporting the company’s most recent quarterly financial performance, aircraft engine manufacturer General Electric indicated in a regulatory filing the 737 MAX grounding could result in a $1.4 billion impact on the manufacturer’s cash flow because GE does not get paid for its LEAP model engines until airlines take delivery of new aircraft.

More significantly, GE disclosed that the company has now slowed production levels of the MAX engines.

From our Supply Chain Matters lens, that is a rather significant development since aircraft engine deliveries were the previous weak link in attempts to crank-up monthly production volume of the Max. One would assume that Boeing agreed to this slowdown because inventory levels were such to support reduced production levels. That stated, if and when the aircraft returns to increased monthly production volumes, there will again be a close looking glass on GE’s ability to sustain monthly cadence.

In its reporting of GE’s recent quarterly financial performance, The Wall Street Journal cited an investment analyst as indicating that once the aircraft is approved to fly again, Boeing may be compelled to discount the aircraft’s price, which implies less revenues for suppliers, including GE. Such a scenario is likely a significant concern for all existing Boeing 737 component and systems suppliers.

The WSJ additionally reported that aircraft fuselage and structural components supplier Spirit AeroSystems indicated this week that 200 workers have taken voluntary retirement as part of an effort to mitigate the impact of the ongoing Max monthly production cuts.

That situation can get worse for all existing suppliers if Boeing elects to temporarily suspend Max production until the aircraft is re-certified.