Supply Chain Matters has been focusing on the implications of many recent major supply chain disruptions.  Beyond the immediate impact of an incident are the longer-term implications, both 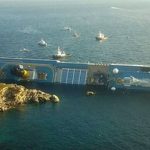 financial and operational in nature. Thus may be the case concerning the tragic grounding of the passenger cruise liner Costa Concordia that occurred in January.  This cruise liner with 4200 passengers and crew went aground off the coast of an ecological sensitive marine sanctuary area of the Italian coast on January 13, incurring the loss of 32 human lives with lots of open questions regarding ship safety procedures.  The incident itself should not only be of considerable concern to the cruise line and travel industry, but also to supply chain transportation teams who rely on ocean transport.  For it is the final magnitude of the monetary cost that will potentially impact shipping operations for years to come.

Beyond the obvious cost of human life is the rather unprecedented difficult challenges and ultimate financial cost of this tragedy in monetary terms.  The operator of the vessel, Costa Cruises, has since been forced to declare the 14 deck ship a total loss, giving-up ownership but maintaining “judicial custody”.  The original cost of the Concordia was reported to be €450 million (roughly $590 million).

The next phase will be a salvage operation that can only be described as incredibly challenging. Six bids were submitted and a contract has been awarded to a partnership of U.S. based Titan Salvage and Italian based Micoperi. Their proposal involves building an underwater platform beneath the sunken Concordia, repairing of the massive gash in the ship’s hull, re-floating the vessel using air bags, and towing it to a convenient port to begin salvage.  While all of this is happening, the contractor must take measures to both protect the existing marine sanctuary and restore any marine ecosystems that might have been harmed, such as posidonia, a protected species of seagrass.

This preparation and re-floating effort may take over a year to complete and being unprecedented in scope, there are no certainties that all can be accomplished without unforeseen setbacks.  In terms of financial costs, Bloomberg BusinessWeek originally reported that impact to the ship’s insurers to be upwards of $512 million. Costa’s parent company, Carnival Cruise Lines recently reported fiscal first quarter earnings which indicated incident expenses of $29 million, including a $10 million insurance deductible related to third party personal injury liabilities. The company recorded an insurance recoverable of $515 million (€384 million), which offset the write off of the net carrying value of Costa Concordia.  More importantly Carnival indicated that expectations for 2012 will be affected by the direct and indirect financial consequences of the incident.

Meanwhile the investigation into the accident continues as authorities are looking into the actions of nine individuals, including Francesco Schettino, the captain of the Concordia, who remains under house arrest on suspicion of manslaughter and abandoning ship.  He has denied any wrongdoing in the accident. Both the European Cruise Council (ECC) and US-based Cruise Lines International Association (CLIA) have conducted initial operational safety reviews and have issued new standards regarding the supply of life vests on cruise liner decks, adhering to prescribed navigation routes and the banning of visitors to a ships bridge when the vessel is operating. The open question is whether these new guidelines are strong enough to avoid future accidents, loss of life or considerable monetary and ecological damage.

While the cruise line industry is uniquely different than ocean container and bulk freight movement, the potential for spillover impacts is possible in terms of longer-term insurance and operating costs implications. Related events in the coming months will obviously provide the total scope of implications, including the ultimate verdict of trials and whether the extraordinary salvage operation is successful.

Breaking News: China Retaliates with Added Tariffs and Trump Responds with an Order for U.S. Companies to Exit China