Industry supply chain management teams have the opportunity to once again pivot to provide positive revenue growth opportunities for businesses. However, achieving on-time customer satisfaction needs while meeting budgeted product cost and margin objectives will be a tall order.

The J.P. Morgan Global Manufacturing PMI® report, a composite index produced by J.P. Morgan and IHS Markit rose to a ten-year high for the month of March. The report authors summed up March’s global activity levels as exceptional:

“Manufacturing production increased at one of the quickest rates over the past decade, underpinned by the strongest expansion of incoming new work for just over a decade.”

The caveat, however, was stated rather directly:

“Demand outstripping supply also contributed to a marked increase in purchasing costs during March. Input price inflation surged to a near decade high, the pass-through of which led to the steepest rise in output charges since data on selling prices were first tracked in October 2009.”

As Supply Chain Matters latest editorial reflection noted, this week’s opening of the Suez Canal after a six-day container ship blockage has resulted in a massive disruption in global shipping scheduling and service levels. Added to that are specific industry supply network challenges such as the global wide shortages of semiconductor devices impacting global automotive manufacturing and other industries. It is no wonder that the message for industry supply chain management teams is to now prepare for the worst and plan for the best likely.

March’s index value was reported as 55.0, 1.1 percentage points higher than that of February.  Solid growth was noted across consumer, intermediate and investment goods sectors.

The average index value for Q1-2021 was 54.1, 0.6 percentage points higher than that of Q4-2020, a typically high activity period as businesses scramble to meet year-end revenue objectives.

A further context is that this activity is occurring when nations across Europe and other countries were again experiencing COVID-19 infection induced added lockdowns. Other nations, such as the United States have been steadily ramping up vaccine supplies and vaccination rates.

As noted in the graph below, global output levels are now at a six-year high, and yet alarm signals are blaring across the board. The graph visualization alone provides the scope of why the Suez canal disruption could not have happened at the worst time. It further implies the potential scope of a downside risk if the fallout from the Suez incident completely upends global transportation and logistics networks with more cascading disruptions. 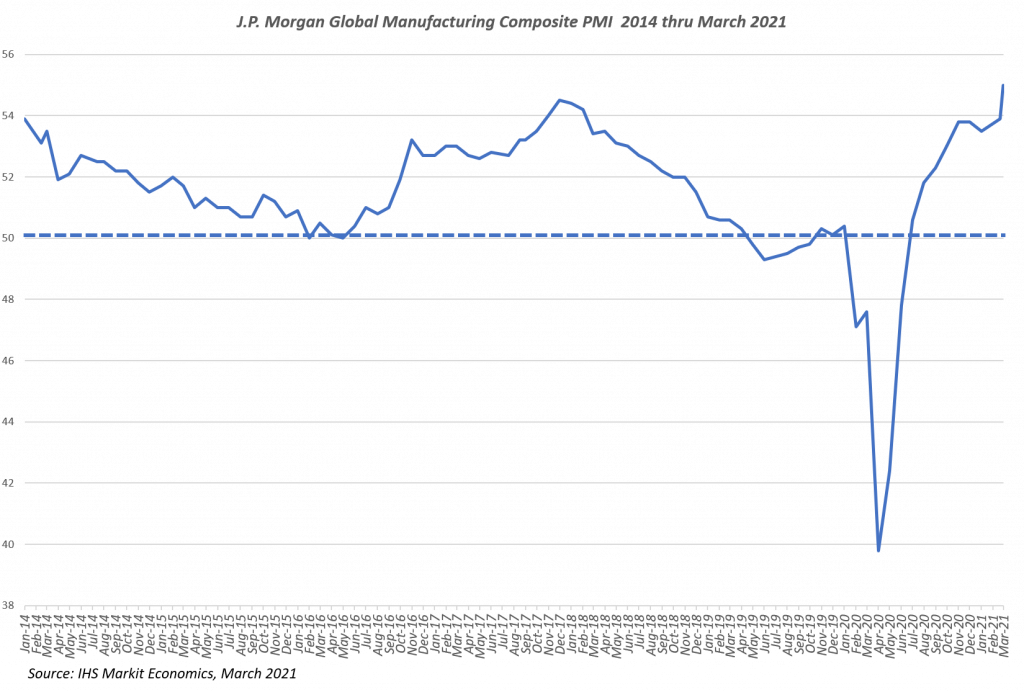 The J.P. Morgan index reflected the five fastest growing nations in terms of production as being Germany, Netherlands, Austria, the Eurozone, and Taiwan.

China, on the other hand provided some mixed signals. The Caixin China General Manufacturing PMI®, which is generally weighted toward smaller private manufacturers declined 0.3 percentage points to a value of 50.6 for March, the lowest reading since April 2020. Noted was the pace of expansion has slowed during the past four months.

China’s PMI index produced by the nation’s Bureau of Statistics climbed to a three-month high value of 51.9 for March. The agency pointed to an accelerated recovery in manufacturing since the Lunar New Year festival.

Now with the March indices available, the warning sirens are blaring but from a different context. There is obviously robust product demand from all three sectors of investment, intermediate and consumer goods. Manufacturing plants across the globe have ramped-up capacity but are hampered by more volatile disruptions in inventory needs and dramatically increasing material input costs.

Thus, are the pressure cooker warning signs for global supply chain management teams entering Q2-2021, and teams accustomed to lean supply chain practices must change their perspectives. As stated in our previous commentary, do not assume business as usual relative to inventory policy, capacity, material or inventory timing considerations.  In this environment, information and developments will continually change. The goal is the ability to anticipate such changes, along with their implications, before they occur.

Strap your seat belts for a wild ride over the coming months.