For the full year, Maersk reported total revenues of $30.9 billion, a 13 percent increase over 2016. Q4 revenues were $81.2 billion in Q4. Net profitability, accounting for restructuring and discontinued operational costs amounted to a $1.2 billion loss compared to a $1.9 billion loss in the prior year.  Fourth-quarter net profit was $386 million, considerably better than the $2.86 billion loss in the same period last year. However, cash flow from operations nearly doubled to $2.6 billion vs. $1.3 billion in the prior year. 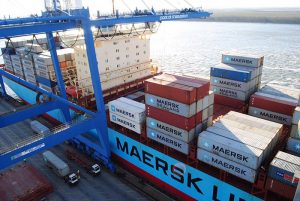 The transportation provider’s Maersk Line recorded $24.3 billion in full year revenues, an increase of $3.6 billion over the prior year. Annual profit was $541 million vs. a loss of $376 million in 2016. Maersk Line reportedly contributed a reported 80 percent of 4th quarter revenues and delivered $53 million in underlying quarterly profit.

Amid the latest report of financial performance, Maersk CEO Soren Skou indicated to The Wall Street Journal that his firm is simply not making enough money, somewhat of a candid admission. The CEO elaborated that Maersk needed to improve profitability through a combination of higher shipping rates and added cost reductions.

As Supply Chain Matters has highlighted in prior commentaries, a lot has occurred in a year’s time.  However, the global ocean container transportation industry remains in an over-capacity situation.

The corporate parent has sold-off other marginally performing transport units including a crude oil related services business and separate oil tanker shipping unit reaping $10 billion in the process. The shipping giant has established a milestone to sell its oil drilling arm by the end of year. Maersk further completed its over $4 billion acquisition of German-based peer ocean container shipping line Hamburg SuD in December, and now controls a reported 19 percent of global ocean freight movements, which is considerable market-share influence.

Industry supply chain ecosystem transportation procurement and operational logistics teams know full well that container shipping vacillated throughout 2017 but also peaked in Q2 and Q3 at the height of inbound shipments related to the Q4 holiday fulfillment quarter. In a previous Supply Chain Matters commentary after Maersk’s mid-year financial report, we highlighted two important signposts for Maersk. One related to validation of the then current rising ocean container transport rates, and the other being a stark reminder of Maersk system’s not being prepared for the monetary risks related to a cybersecurity attack. While container volume rates averaged 5 percent growth for the entire year, volume in Q4 slowed to 3 percent. Industry supply chain obviously planned for earlier shipments and inventory for the all-important Q4 peak selling period.

In August 2017, Skou indicated to the Financial Times: “We have the strongest fundamentals for container shipping since the financial crisis.”  That translated to an average 22 percent rise in freight rates in Q2. Once more, the CEO forecasted added industry consolidation observing that smaller lines would not be able to compete with the larger players which are now grouped among three operating alliances to pool capacity and port calls. Mr. Skou went on to observe that while three years ago, there were 20 global shipping lines, now there are 11, and his prediction that in the future, there will be five or six.

Now, Skou has pinned the future growth of Maersk on both integrated surface transportation and logistics services coupled with integration and digital transformation of existing business and operational management processes.

That obviously includes investing in a 300 person digital capability center to be located in Bangalore India, a highly publicized joint-venture with IBM to pilot and eventually implement blockchain technology in shipping processes., and a previous announced strategic partnership with Microsoft that calls for transforming supply chain management and global trade via Cloud based services and applications.

The brute reality, however, is that the shipping industry has a very long way to go in reaching digital transformation, given decades-old manually intensive administrative and shipment booking processes, data management and systems technology. That vulnerability was evident from last year’s NotPetya malware attack incident that nearly crippled the shipping giant for upwards of two weeks and incurring upwards of $400 million in mitigation costs.

To the CEO’s credit, he also indicated separately to Bloomberg that he recognizes online giants Alibaba and Amazon as both customers as well as industry disruptors in their abilities to deliver integrated logistics and transportation services for businesses. Both online retailers will demand Cloud based seamless information and transactional capabilities along with advanced intelligence and data security.

The net-net for Maersk is one of executing on a strategic plan, one that does not have total reliance on increase shipping rates as the piggy bank to fund digital transformation. Shippers are already reeling from significant increases in logistics and transportation costs, especially in Europe and the U.S.

The notions of a world-class service-based business is to deliver superior operational efficiency and customer services at a competitive cost. That does not necessarily imply delivery of such services via a pooling of capacity and service scheduling that now exists under the current three major shipping network alliances that now exist, the largest being anchored by Maersk. The alliances now exist to maximize efficiencies, scheduling and sailings among alliance partners vs. the specific needs of individual shippers or industries.

It implies a strategic plan that has a keen focus on acknowledging areas needing improvement in responsive and reliable sailings and on-time performance. To its credit, the 2017 Annual Report acknowledges Maersk is “implementing measures to improve the level of customer service for Maersk Line customers and to restore Maersk Line’s reliability so it is in the top quartile for the industry.” It further implies digital transformation of administrative processes, not at the convenience of carriers and service providers, but at the timetables that customers require.

That contrasts to the headline of a CEO communicating the need for seeking even higher rates via industry and services consolidation.

From our lens, multi-industry supply chain customers seek the former, not the latter.