Posted by ferrariadmin | Dec 1, 2017 | Procurement and Sourcing, Transportation and Logistics | 0 | 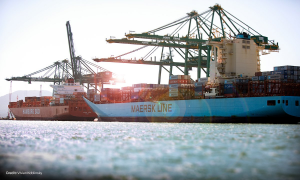 A year-ago, Supply Chain Matters began highlighting business and transportation media reports that Maersk was looking to acquire the German based ocean container shipping line. The latter owns and charters upwards of 130 container ships it had nearly 6000 employees and $6.7 billion in revenues in 2015.

In December, the formal announcement was made, with parent company AP Moeller Maersk formally announcing the acquisition of the German container shipping line from the Oetker Group for £3.7B on a cash and debt-free basis. With this week’s announcement of regulatory approval, Maersk can now proceed with the completion of the acquisition.

In September of 2016, parent A.P. Moller-Maersk announced that it would split its current business operations into two separate operating businesses. Maersk Line, the world’s most dominant ocean container carrier being the center point for a new container transport and logistics division that will consist of other owned businesses such as APM Terminals, Damco and Maersk Container Industry businesses. In this week’s announcement, Maersk points to an important milestone being achieved in the Maersk Line strategy to become an integrated transport and logistics company.

Combined, the two lines are expected to realize synergies in the region of $350-400 million annually starting in 2019, primarily from integrating and optimizing both shipping networks and standardizing procurement. Together, both lines will operate a total capacity of 4.15 million TEU’s, a combined fleet of 773 vessels owned and chartered, with an estimated 19.3 percent share of global capacity, which solidifies Maersk’s position as a global shipping leader.

Hamburg Sud will also have a new CEO, Dr. Arnt Vespermann, who indicates that the line will continue to serve customers as a separate Hamburg Sud brand.

The takeaway of this week’s announcement for globally based multi-industry supply chain transportation acquisition and services firms is that the forces for ocean transportation consolidation continue along with the influence of major lines and their current transportation consortium networks. As Maersk continues in executing its strategies to further transform to an integrated transport and logistics services provider, there will be added impetus for further industry M&A and consolation forces in the global logistics services sector as-well. The new strategy is clearly becoming global-scale.