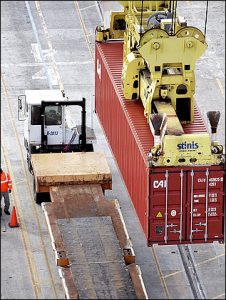 Last week, top economic officials from both China and the United States met for two days of talks in Beijing to conduct high-level trade talks to try to resolve growing tensions related to announced tariffs on imports. The U.S. has essentially requested China to cut its trade surplus in the amount of $200 billion by 2020.
On Friday, the talks ended without any agreement with news outlets indicating scant progress. China’s Xinhua News Agency indicated that the two sides reached a consensus in “some areas” and would establish a “working mechanism” to maintain communications. The White House released a statement indicating both sides “held frank conversations” about “rebalancing” U.S.-China economic relations. An opinion commentary from The Economist observed:
“The positions that both sides took were so extreme and contradictory that compromise appears a remote prospect. What, until now, has been largely been a war of words could easily careen into a full-fledged trade war.”
With no meaningful actions related to next steps, indications are that trade tensions among the two influential nations are likely to continue toward added tariff actions, with either side not willing to concede. Beginning on May 23rd, the U.S. can elect its first set of import tariffs amounting to upwards of $50 billion in trade. China would likely respond with its own previously announced tariffs.
Meanwhile, the chairperson of the world’s largest contract semiconductor fab producer, TSMC, indicated in an interview with the Financial Times on Sunday that the Apple supply chain could suffer if a trade war erupts between the U.S, and China. Morris Chang warned of the escalating threat of higher tariffs would adversely affect companies like TSMC, which currently generates over half of its revenues from semiconductor processors powering multi-brand mobile devices including Apple’s iPhone lineup. The Financial Times also cited Taiwan based Yuanta Securities analyst Sam Kao, a noted Apple supply chain watcher, as indicating that Apple suppliers Hon Hai Precision, Pegatron and Wistron could face the most pressure from the effects of a trade war.
Commenting on the Chang interview with FT, the Australian Financial Review quotes a regional director of The Economist Intelligence Unit as indicating that while Apple’s finished product might escape the tariff net, it is likely inevitable that part of the high-tech consumer electronics component supply chain will get caught-up.
Apple has decline comment to multiple publications.
For industry supply chain teams in multiple industries and product sectors, these latest developments obviously add to higher levels of uncertainty. The question now turns to what trade actions will follow and how many other products are caught in the escalation of tariff actions among China and the U.S., as well as other global regions.
There should be little doubt that international supply management and supply chain risk mitigation continue to be part of C-Suite discussion and action planning. Insure that your business and your senior management teams are prepared with sets of cost impact scenarios.
Bob Ferrari
© Copyright 2018. The Ferrari Consulting and Research Group and the Supply Chain Matters® blog. All rights reserved.