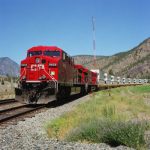 Canadian mining, agricultural and other commodity industry players. A report published in The Wall Street Journal quotes a Canada’s Labor Minister as indicating that this strike could cost the Canadian economy up to 500 million Canadian dollars per day. The government is threatening passage of back-to-work legislation if the labor dispute continues.

Interesting enough, this action comes on the heels of a shake-up involving CP senior management.  A elongated proxy battle between U.S. activist investor Bill Ackman and the CP board resulted in the recent exit of CP’s long time CEO, Fred Green.

CP also operates service across 13 U.S. states but thus far, these operations have not been affected by the labor action. However, if this strike continues over an extended period, U.S. grain and other export commodity shipments may have to be re-routed from ports in western Canada.

The State of U.S. Logistics is Once Again Troubling

April 26 2019 Edition of This Week in Supply Chain Tech