Published indices reflecting July 2021 global and regional purchasing and manufacturing indices (PMI) again reinforce that global production remains as it has been for several months, at full throttle.

Multiple constraints and supply chain disruptions continue to abound in multi-tiered capacity constraints, exploding input costs, price inflation, as well as elongated supplier lead times. The data further reinforces that the ongoing restrictions brought about by new variants of COVID-19 are having a much more discernable impact on emerging regions.

The J.P. Morgan Global Manufacturing PMI® report, a composite index produced by J.P. Morgan and IHS Markit dipped again in July with a reported value of 55.4, compared to the June value of 55.5. The report authors headlined the July report as: “Supply chain constraints stymie growth of global manufacturing.”.

Commentary further indicated rates of increase in production output and new order flows once again eased amid record supply chain constraints. Of concern is a notation that purchase price inflation is now among the steepest over the past 13 years. Further reported was that the challenging operating environment has dropped confidence levels to a nine-month low.

Reportedly, 22 out of 29 nations reported production growth in July. Bright spots remained the Eurozone, specifically the Netherlands, Germany and Austria. Other countries called out for positive momentum were the United States, the United Kingdom, Italy and Taiwan.

The five regions growing at the fastest rates in June were reported as Netherlands, Austria, Germany, Ireland and the United Kingdom. The five regions experiencing the lowest growth rates were reported as Myanmar, Indonesia, Malaysia, Vietnam and Russia.  A common theme for this latter commentary remained new outbreaks of COVID-19 infections impacting business conditions.

As noted in the graph below, global output levels remain at a seven-year high, but the curve of growth is again reflecting a downslope due to significant constraints. 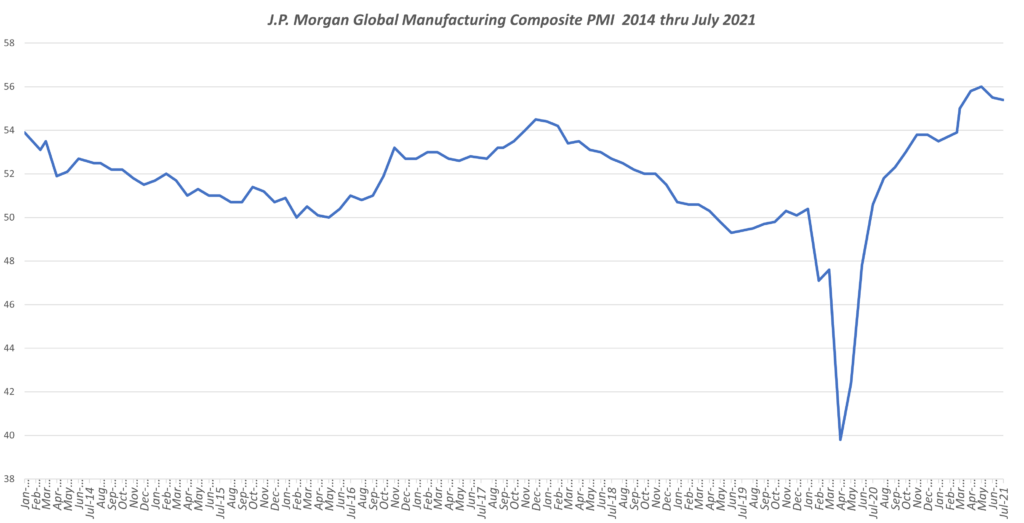 The Manufacturing ISM Report on Business® for July was reported as 59.5, a 1.1 percentage point drop from the 60.6 reported for June. Authors of this report indicated in part: “. all segments of the manufacturing economy are impacted by near record-long raw materials lead times, continued shortages of critical basic materials, rising commodity prices and difficulties in transporting products.”

The separate IHS Markit U.S. Manufacturing PMI™ ticked up to a record high of 63.4  in July from a value of 62.1 in June. Authors of this index noted that supply delays and price pressures hit new peaks and specifically noted: “Unprecedented supplier shortages and delays continued to exert upward pressure on input costs and stymie firms’ ability to process incoming new work.”

The IHS Markit Taiwan Manufacturing PMI reported a value of 59.7 for July, a 2.2 percentage point increase over June’s value and noted as a significant improvement in operating conditions. Panelists reportedly indicated improved order flows from Europe, mainland China and the United States during the month. Report commentary, however, indicated that Taiwanese manufacturers are still noting considerable supply chain disruption amid the ongoing pandemic with backlogs of work rising at a near record pace. Keep in-mind that this specific region serves as a global epicenter of semiconductor processor and device production.

China’s manufacturing activity contracted again in July. The Caixin China General Manufacturing PMI®, which is generally weighted toward smaller private manufacturers, slipped to a reported value of 50.3 from the 51.3 value reported in June. This value reportedly signaled the slowest improvement over 15 months. The authors noted that new business eased to a slower rate in July with recent upticks in COVID-19 infections domestically and abroad dampening growth. Chinese manufacturers reportedly were generally optimistic that output would increase in the second half, but confidence levels slipped to a three-month low.

The official manufacturing PMI compiled by the country’s Bureau of Statistics, which tends to be weighted toward large enterprises and state-owned manufacturers, eased to 50.4 from the 50.9 reported for June. Reportedly, economists were more concerned that new export order index fell to its lowest level since July of last year when activity was robust. The country further experienced localized outbreaks of COVID-19 variants that impacted certain production and transport activity, particularly the Port of Yantian, the globe’s busiest facility.

The IHS Markit Vietnam Manufacturing PMI® ticked up slightly to 45.1 in July after sharply falling to a value of 44.1 in June.  Manufacturers in the country continue to be severely impacted by the latest wave of COVID-19 infections leading to company shutdowns in some areas and worker restrictions in other areas. Commentary associated to the July numbers indicated that this sector is likely to remain under pressure and struggle to generate growth until virus outbreak levels are brought under control. As noted in our June and Q2 2021 PMI summary highlights, with this region serving supply networks as a resiliency back-up to that of China, particularly in the high-tech sector, this remains an area of concern entering the second half of the year.

India’s manufacturing and supply chain have bounced back from conditions reported in May and June when the country was raging with coronavirus infection levels. The IHS Markit India Manufacturing PMI® rose above contraction to a value of 55.3 in July from the value of 48.1 reported in June. The report authors noted that factory orders rose amid improved demand levels for goods and the easing of restrictions. New export orders reportedly rose sharply in July with manufacturers increasing hiring levels.

A further and welcomed bright spot in the developing regions category was that of Mexico. The IHS Markit Mexico Manufacturing PMI© rose for the second month running to a value of 49.6 in July, after languishing at contraction levels for several months. The July value was the highest from a 17-month sequence of contraction brought about by high incidences of coronavirus infections and consequent factory and services closures. That stated, the region reportedly remains impacted by logistics bottlenecks and raw material shortages.

July’s PMI data again reinforces the stark imbalances occurring among multi-industry product demand levels contrasted with ongoing material shortages, elongated supplier lead times and global transportation disruptions. Those shortages have now resulted in signs of a lack of flexibilities in production and transportation capacity because of either increased labor shortages or ongoing disruptions.  The demand and supply imbalance of global-wide vaccines among emerging economies is now a more growing concern for global supply chain management teams.

At this point, multi-industry supply chain management teams are encountering multiple simultaneous challenges and the outlook for the remainder of this year is to likely anticipate even more challenges.

Once again, while industry and global supply chains were the saviors of many businesses in 2020 in efforts to respond and mitigate the impacts of a global pandemic, the scenario is different and far more challenging in 2021 across multiple dimensions. The outlook moving forward remains fraught with uncertainty and anxiety as to what other disruptions are yet to occur.