As a further follow-up to our Supply Chain Matters sixth update report focused on the ongoing COVID-19 Coronavirus impact on Global and Industry Supply Chains, with the bulk of the month of February’s global PMI indices now reported, there is ample quantitative evidence that reinforces the disruptive impacts of the ongoing outbreak on global supply chain activity levels.

Both the reported Caixin China General Manufacturing Purchasing Managers’ Index (PMI) and China’s official government PMI Index for the month of February reinforce the magnitude of the impact to that country’s production and supply chain activity as a result of the virus outbreak.

The latter’s report, which is more weighted toward general manufacturing and SMB activity across China, featured the headline: “Production declines at record pace as factories shutdown due to coronavirus.” The February reported value of 40.3 was 10.8 percentage points below the 51.1 value at the start of 2020, and obviously, unprecedented.   Noted was that production, new work and staffing levels collectively fell at the fastest rates since the survey began 16 years ago.

The latter report which is more weighted toward state-owned manufacturers’ reported a February value of 35.7, also contrasted the contraction as the fastest pace on record. That value was a 14.7  percentage point drop from January’s reported levels of production and supply chain activity. The official government PMI value was also the lowest reading since the survey began in 2004.

The widely followed J.P. Morgan Global Manufacturing PMI composite index headlined global manufacturing experiencing its steepest contraction in over a decade as a result of the virus outbreak. The February value fell to 47.2, well below the milestone 50 neutral mark, and 3.2 percentage points below January’s index. Much of the February decline was attributed to the impacts experienced in China. With the reported global manufacturing output index for February collapsing over seven points, the report authors note the second-largest monthly decline recorded as far back as 1998. 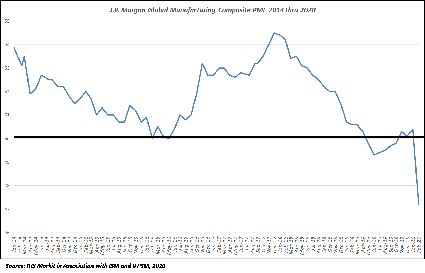 With the February value, global-wide manufacturing and supply chain activity levels are officially now at contraction level, as well as the sign of manufacturing recession. According to the report’s authors, of the 31 nations for which February data was available, 15 registered contraction.

Our glance of reported February PMI values across developed nations noted that the Eurozone, Japan and Taiwan are each at contraction levels. The Jibun Bank Japan Manufacturing PMI’s report headline indicated that manufacturing output was hit by the biggest drop in new orders since December 2012.

Conditions reflected by the February IHS Markit Vietnam Manufacturing PMI headlined a sharp contraction in manufacturing output brought about by the coronavirus disruption. Noted was the quickest fall in production since June 2013. Vietnamese manufacturers reportedly are struggling to obtain essential inputs of materials from China based producers, which is a reflection of how companies have turned to Vietnam to be the offset for China dependence.

Following the path of the virus movement beyond China, The Nikkei South Korea PMI report noted the sharpest fall in production activity since 2015 amid factory closures as a result of the virus spread within that country.

With the bulk of inventory supply shortage impacts expected to impact U.S. manufacturers and retailers by the end of this month, or next month, we would not all be surprised if the U.S. index falls to contraction level by that time.

Global-wide PMI indices for February provide the initial quantitative evidence of the significance of supply chain disruption, but also  the beginning of what can likely be unprecedented disruption in the coming months as the cascading ripple effects on customer demand as well as product supply networks continue across the paths of the ongoing virus spread.

Companies should likely anticipate that contraction levels will continue for several additional months, depending on the extent of the virus spread globally.

Needless to state, active monitoring, supplier communications, continuous planning and scenario analysis are now crucial in determining the impacts for respective businesses and industries.  February is one data point, of many others, including logistics activity indices and on the ground reports.

The coming months are sure to again test planning, analysis and supply chain decision making capabilities amid a major disruption.