As we pen this Supply Chain Matters blog, Hurricane Michael, after following a path across the Gulf of Mexico, has made landfall as a Category 4 hurricane with reported winds of 155 miles-per-hour. Initial impact was near Mexico Beach in the Florida Panhandle region. Warnings for catastrophic damage from wind damage remain in-effect for the Florida Panhandle region. Initial storm surge was reported as high as 13 feet in some areas. 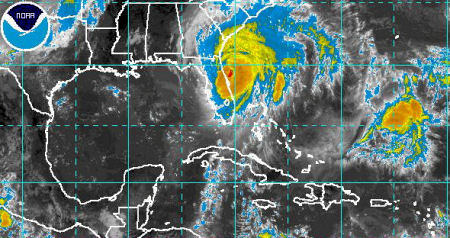 The governor Florida has declared: “This is the worst storm that our Florida Panhandle has seen in a century.”

Weather officials are labeling this storm as historic, stronger than what has occurred in decades.

The historic storm is expected to traverse northeast  through portions of central Georgia, South and North Carolina, and Southeastern Virginia, exiting into the Atlantic Ocean. Winds are expected to stay at hurricane strength as this storm moves inland, with forecasts of an average of 4-8 inches of widespread rainfall, and as much as 12 inches of rainfall in certain areas of initial landfall. Downed trees and power outages are expected all along the path of this storm. Coastal flooding is expected along the Georgia, South and North Carolina coastlines. The governors of Alabama, Florida, Georgia, North and South Carolina have each declared emergencies for parts of their states, encompassing tens of millions of residents.

Unlike Hurricane Harvey that impacted the Texas Gulf Coast last year, and Hurricane Florence that impacted portions of North and South Carolina two weeks ago, this storm appears to be fast moving is expected to traverse inland portions by Friday of this week.

According to current weather forecasts, the magnitude of river and stream flooding in portions of North and South Carolina is expected to be less than that of Florence. However, there remains a risk of major flooding in areas of southwest portions of South Carolina, Georgia, Florida and eastern Alabama, areas that were not really affected by Florence.

From an industry supply chain disruption perspective, the impacted regions have strong agricultural and manufacturing presence. The Southeast U.S. is a major hub for automotive supply chains and other industrial manufacturing. This area is a major transportation hub with the presence of the Ports of Savannah and Charlestown and with a number of inland ports supporting the wide concentration of manufacturing in this region. Surface transportation and trucking are certain to be impacted, the question being for what duration.

Industry supply chain teams are obviously on alert as well as emergency and disaster response teams.