Following up on our earlier alert, Hurricane Laura made U.S. landfall near Cameron Louisiana as a Category 5 hurricane with winds estimated to be 150 miles-per-hour recorded near Lake Charles, Louisiana. We indicate estimated since the electronic wind gauge at a local airport was destroyed during the initial part of the storm.

According to local media reports, the storm was the largest to impact to this particular area and the U.S. Gulf Coast in decades, more so than recent damaging storms. Thankfully, it appears that large numbers of deaths did not occur. As we pen this blog, Louisiana officials have indicated 6 deaths tied to this hurricane. 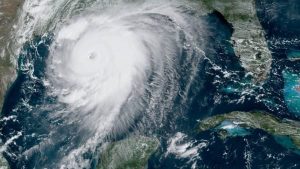 Search and rescue efforts remain underway in the impacted regions. Upwards of 800,000 utility customers have lost electrical power. The U.S. Federal Emergency Agency’s (FEMA) storm response resources were already stretched to the maximum with the ongoing COVID-19 coronavirus outbreak among numerous U.S. states. And with the raging wildfires occurring across the State of California.

Local news reports have indicated that the initial storm surge of the storm was less than had been forecasted. The storm itself weakened to a Category-3 storm shortly after landfall and as of this morning is being classified as a tropical storm traversing the Southeast interior of the U.S. with forecasters expecting the storm to emerge off the U.S. northeast coastal region and move out to sea.

According to reporting from The Wall Street Journal, the storm narrowly missed the heart of the Gulf Coast’s energy refining and chemicals production infrastructure.

A chemical plant fire occurred near Lake Charles.  The fire involved producer BioLab, which manufactures chemicals used in household cleaners and chlorine for pools and was extinguished Thursday night.

In the Port Arthur Texas and Lake Charles Louisiana regions, various energy and chemical producers are assessing that state of overall damage to facilities.

As with storms of this magnitude, the complete assessment of any industry supply chain disruption usually comes after teams make a complete assessment, and since products produced in the impacted region are generally raw material for many other products, it will take further time for a full assessment.