Every year at this time, the Supply Chain Matters blog highlights full year operational performance results from the two most dominant commercial aerospace industry players, Airbus and Boeing. Needless to state, this has been an extraordinary year for the industry and its associated supply and trading partner networks. The ongoing corporate crisis that surrounds Boeing since the global-wide groundings of all operational and produced 737 MAX aircraft in March 2019 continues, along with the implications.

Therefore, this commentary will be different in that unprecedented milestones and added challenges have been established for the industry’s supply and customer demand networks.

Let’s cut to the chase and begin.

The Boeing Company announced 2019 full year deliveries to be 380 aircraft, representing the lowest levels of overall deliveries in 14 years.

In the closely watched 737 aircraft model, 127 total deliveries were reported for the year.

Other delivered aircraft in 2019 consisted of 158 of the 787 Dreamliner model, 45 of the wide body 777, 43 of the wide body 767, and 7 of the 747. According to reporting by The Wall Street Journal, the record 45 787’s delivered in the fourth quarter, coupled with added wide-body customer deliveries, was estimated to have added $1.5 billion to revenue flow.  Yet, Boeing continue to burn thru an estimated $1 per quarter amid the company’s ongoing operational crisis.

The above numbers represent aircraft deliveries to customers where payments are exchanged. Not represented are the estimated over 400 737 MAX aircraft that were produced but are being parked in any available temporary storage space near the Renton manufacturing site or other available airfields. All of these aircraft will have to be eventually re-inspected and delivered once the aircraft is cleared for continued operational service. At this point, there is no definitive declared timeline.

Boeing’s traditional Deliveries press release provided no additional commentary. Given that the new CEO has taken the helm this week, perhaps that is to be expected.

In mid-December, the company’s board made the decision to suspend monthly production of the 737-family effective this month. Reports of voluntary layoffs associated with air frame and fuselage supplier Spirit AeroSystems involving over 2000 employees are just the start of other such news to come.

Boeing’s gross orders for the year were 246 aircraft, while net orders after cancellations or conversions was a mere 54 aircraft. That net number compares to a reported 893 aircraft orders in the prior year. This is also unprecedented, with industry watchers scratching heads to figure out when was the last time this has occurred. Regardless, it is not good.

At the end of 2019, commercial aircraft order backlog for Boeing was reported as 5406 aircraft.

With the ongoing implications of the 737 MAX groundings, coupled the elongated delay of the new 777X due to an engine design issue, prospects for attacking order backlog do not appear positive for the current year.

Airbus reported what the manufacturer described as strong 2019 commercial aircraft performance. The company reported a total of 863 aircraft delivered to 99 customers in 2019, representing an 8 percent increase over the prior year.

A table reflecting 2019 deliveries is compiled below:

Readers will be able to note that after a setback during the third quarter deliveries, the final quarter deliveries relative to single aisle aircraft reflected the usual hockey stick performance to make the annual goal.

Of positive note was that a total of 46 Airbus A220 family aircraft, the former Bombardier C-Series, were delivered  during the past year. That was a significant accomplishment, and from our lens, a reflection of the company’s supply chain management wide influence and resources, after assuming ownership of the aircraft in July 2018. That aircraft’s new production facility in Alabama will be finally operational this year.

Of continual concern was that a total of 642 A320 family aircraft were delivered in 2019, a mere 2.6 percent increase over the prior year. That level of performance has to be disappointing to airline customers with outstanding orders for this aircraft, and further a reflection of the supply network scale-up challenges that remain.

In briefing for analysts and investors at the mid-year point, Airbus CEO Guillaume Faury’s financial guidance implied delivery of over 500 aircraft in the second half of the year. The actual second-half performance of 474 fell short of that goal.

None the less, Airbus gets to declare the coveted industry accomplishment for delivering the most aircraft in the year. But, we knew at mid-year that the trends were all in favor of Airbus.

In this year’s operational announcement, Airbus provided the below impressive Infographic. 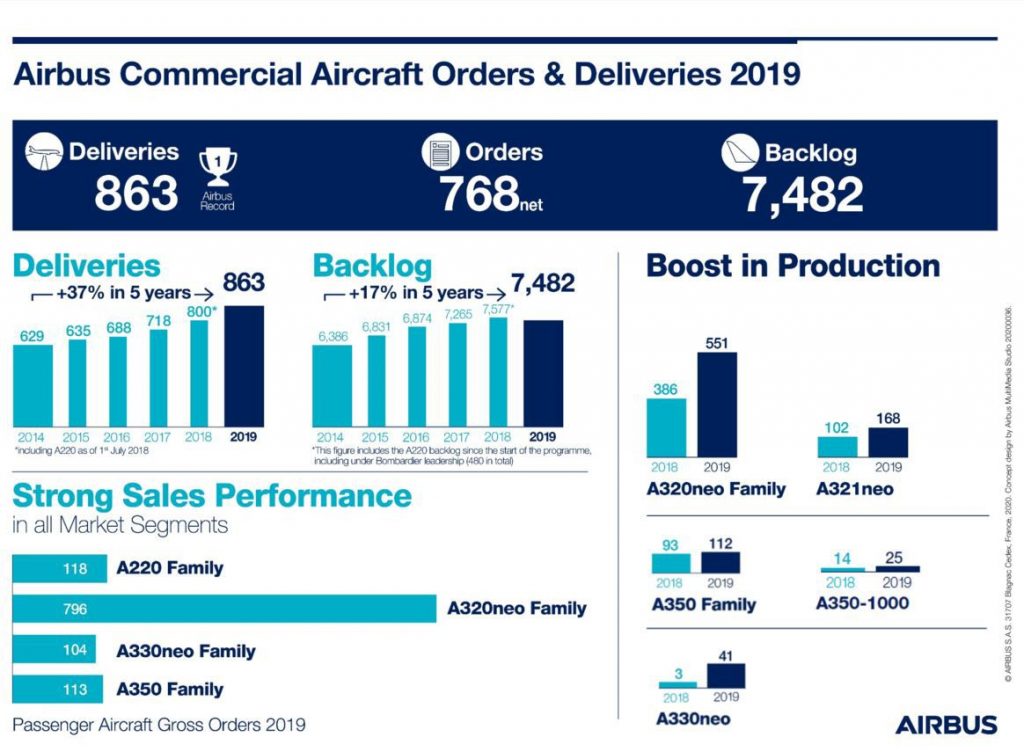 Airbus reported a total of 1,131 new orders in 2019, with the net orders number being 768. That level of order churn remains a concern for the broader industry because a number of start-up airlines have run into financial difficulty.

At the end of 2019, total backlog for Airbus commercial aircraft was reported as 7482 aircraft, representing 8.7 years of backlog at current production cadence.

When we penned our commercial aircraft operational performance blog commentary after the close of Q2, we provided the following observation:

It is becoming ever clearer for both commercial aircraft manufacturer’s that individual supply network performance remains crucial in 2019. Beyond that, it will be the determinant for long-term goal attainment for investors, suppliers and customers.

A mere six-months later, the picture reflects one player continuing to overcome the challenges of having to scale-up production and aircraft delivery rates to unprecedented monthly volumes.

Boeing, the other manufacturer continues to be challenged with what is likely the most significant corporate crisis in the company’s history. The creditability of the company and of the safety of designed and produced aircraft is being questioned. Each week, there are new developments and more troubling revelations. There are call for the company to return to its engineering roots.  As noted in our prior Boeing focused commentary: While the decision to replace the company’s, CEO was inevitable and likely overdue, the challenges remain, and they are not getting easier.

Boeing will eventually recover but the open question is timing. There is obviously a significant level of ongoing concerns among Boeing’s supply and trading partner network participants regarding such timing and the ripple effect implications.

An industry that just one year ago, continued to bask with the envy of having upwards of ten-year order backlogs with continual inbound order flows is facing a far different picture at the start of the year 2020.

For one player and its associated supply network ecosystem, the challenge remains consistent operational execution and agility to customer needs and ongoing developments. For the other, it is overcoming a culture of corporate arrogance, inward thinking and far too much emphasis on shorter-term investor returns.

An industry that manifests 10- and 20-year market forecasting trends is faced with evolving realities that a changing and highly uncertain global economy, and a highly challenged manufacturer could well spill over to aircraft demand needs, or to the financial health of certain suppliers and airline customers.

These are the times at the start of the 2020 decade among commercial aircraft supply chains.