In this blog posting, Supply Chain Matters analyzes the latest quantitative and qualitative data related to ongoing global manufacturing and supply chain activity levels along with the implication for the year 2020 business assumption and resource planning.

Over these past several months, the Supply Chain Matters blog has been alerting our readers to ongoing quantitative data indicating a discernable slowdown in global-wide supply chain activity levels. Now, with the bulk of September’s global supply chain activity now being reported, along with the World Trade Organization’s (WTO) latest global trade forecasts,  Wall Street and investors have now woken-up to the real threat of a manufacturing recession, that could well lead to economic recession. 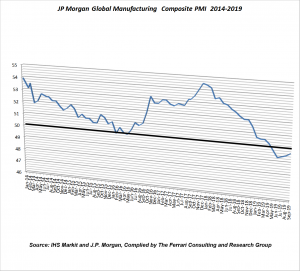 Let’s begin with the WTO which declared this week that world trade volumes are forecasted to grow at the weakest pace since the global financial crisis. The agency now expects material export flows to grow a mere 1.2 percent this year, down from the 3 percent level that occurred in 2018. That level amounts to a 60 percent decrease. While the escalating trade war among China and the United States has been a contributing factor, the current turmoil involving a possible hard Brexit, and the ongoing trade dispute embroiling Japan and South Korea are each contributing to the decline. The Wall Street Journal cites economist at Barclays indicating that Chinese imports from the U.S. are down 28 percent by the first seven months of this year, while U.S. imports from China are reportedly 12 percent lower.  The WTO currently anticipates trade growth to be 2.7 percent in 2020 but qualifies that number dependent on “a return to normal trade relations.”

From our lens, that is a high bar at this point in time.

Scanning the various major regional PMI reporting for both September and for all of Q3, the report headlines are sobering.

The Markit Eurozone September PMI value of 45.7 was noted as the worst in seven years and the eight successive month of contraction level. Commenting on the report, the Chief Business Economist at IHS Markit indicated there is likely worse to come.

The September 2019 Manufacturing ISM Report on Business, reflecting U.S. activity, reported a PMI value of 47.8 for September, the lowest reported level in ten years. The announcement was met with an immediate selloff in U.S. equity markets with stocks sensitive to industrials, commodities or materials. Analysts were expecting a value of just over 50 and the notions of the degree of contraction apparently spooked investors. Timothy Fiore, responsible for compiling the report for ISM indicated:

“Global trade remains the most significant issues, as demonstrated by the contraction in new export orders that begun in July 2019. Overall, sentiment this month (September) remains cautious regarding near-term growth.”

We would add our observations that U.S. activity has likely been impacted by the ongoing Boeing 737 MAX global grounding and subsequent production cutback, not to mention the ongoing three-week long General Motors production shutdown due to a labor strike.

Activity in the United Kingdom, while still in contraction, rose to 48.3 in September after falling to a six and one-half year low in August. However, the overall PMI average of Q3 fell 2.3 percentage points from the average of Q2 activity levels.

The overall JP Morgan Global Manufacturing PMI edged what the authors viewed as stabilization in September but remains at the Q3 contraction three-month average of 49.5. Global manufacturing levels were noted as generally stagnant.  Of added concern is that downturns reportedly continued in the intermediate and investment goods sub-industry sectors, dampening prospects of any future growth.

As supply chain management teams now prepare for what is usually the peak customer fulfillment quarter, concerns are raised regarding ongoing consumer and business customer sentiments among various global regions. There will have to be much focus paid to any excess inventory lying around at the start of 2020.

This final quarter is when supply chain management, procurement and sales and operations planning teams prepare operating and budget assumptions for the upcoming year of 2020. As we have advised in prior late August commentary, teams need to be cautious and diligent in assumptions of expected product demand and subsequent supply commitments.

Forecasting future activity levels often stems from optimism. Entering the current year, PMI panels were generally optimistic about 2019 activity levels. Realities often come to pass after multiple data inputs reinforce that external events such as elevated geo-political tensions and ongoing trade and tariff actions now have a discernable cascading impact on global markets. That reality is now evident, and businesses now need to factor how to navigate this upcoming period.

If there is one important takeaway from the last global recession, it was that markets and supply networks can and will respond rather quickly to bad news. Today’s supply networks operate by just-in-time supply chain planning levels, Thus when product demand dramatically decelerates at a rapid rate, all tiers quickly feel the effects at just about the same time,

As noted in August, this is not only a time for contingency planning, but also active supply and demand network risk mitigation. Planning cycles that require weeks of analysis and plan generation will not suffice, instead planning has to be a net-change, on the go process of continual ongoing analysis, insights and scenario-based preparation.